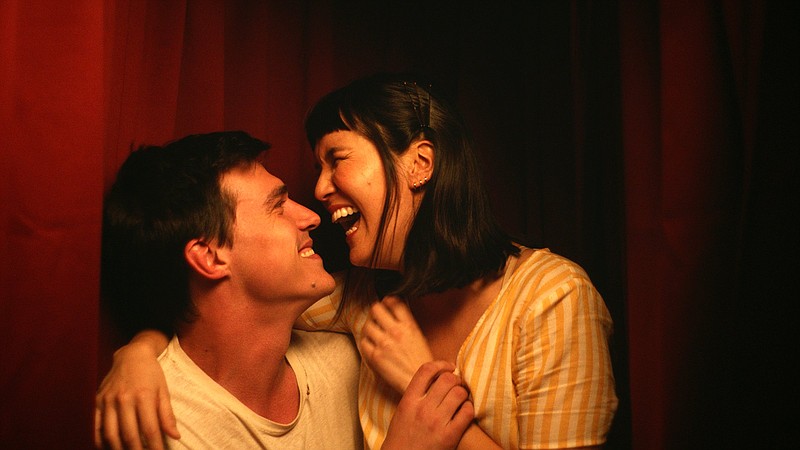 I don't have tons of experience with romantic comedies. It's not that I hate the genre. I really enjoy a few of them, like "Music and Lyrics" and "While You Were Sleeping."

But neither of those movies worked in the sort of science fiction twist "Long Weekend" did.

When I saw the trailer for the film on Sony Pictures Entertainment's YouTube channel, I was surprised it was only a single minute long. Most trailers these days fill between two and three minutes.

The trailer for "Music and Lyrics" was almost two-and-a-half minutes, while the trailer for "While You Were Sleeping" was about 20 seconds longer than that. And the latter was released in 1995!

My suspicion is that Sony wanted to keep its big plot twist a secret, so whoever edited the trailer could only use about half the available clips.

What I can reveal about the plot makes it seem like a pretty formulaic romcom. The story follows Bart (I probably would have picked a different name to avoid Simpsons references) who is played by Finn Wittrock. Bart just got out of therapy after his fiancé left him. He's also moving out of his home and into his buddy's garage. So he's feeling a little down on his luck.

After falling asleep in a movie theater, Bart meets Vienna, played by Zoë Chao (not to be confused with Clöe Zhao, which no one would probably ever do). And the way she just immediately asks him to get a drink and subsequently spends the next 12 hours with him would have come off as unbelievably cheesy and forced if Chao and Wittrock had anything less than perfect chemistry.

I don't know much about romcoms, but chemistry is important. Otherwise why would we waste 90 minutes watching two people fall unbelievably in love?

Bart and Vienna really do seem to click. When she remarks about having never used a sparkler before, Bart gets her one. When Bart is berating himself about not kissing Vienna at the end of the night, she calls him and asks if it's too soon for them to see each other again.

And none of it is corny because Chao and Wittrock are such good actors. They play off each other well.

The chaos these two get into while dating sparks some hilarious scenes and some tender moments. My favorite joke in the entire movie comes when Bart facetiously accuses Vienna of watching him put in his ATM code so she can steal all his money. But he's only got $300 left in the account anyway. So he tells her to go ahead and rob him.

To make a point about how flippant he is with what little cash he has left, Bart stops a passerby on the sidewalk and says something like, "Ma'am, would you like my pin code?" And the woman, with as much quiet, yet righteous indignation as she can muster asks, "Did you just call me ma'am?!"

It was so deadpan my wife and I laughed for a solid minute. And we could relate because apparently calling people "ma'am" is kind of a southern/midwestern thing. When we lived in Portland, Ore., and my wife worked in retail, she also had customers grow angry with her for calling them "ma'am."

The main characters weren't the only thing I liked about "Long Weekend." Remember how I said Bart was moving into a buddy's garage? Well that buddy is named Doug (played by Damon Wayans Jr.), and he's married to a woman named Rachel (played by Casey Wilson). The couple also have two young kids, and I love their whole family dynamic.

The chaos they bring with having rowdy children and some of the conversations they have with Bart left me in stitches. They're the perfect young family who know children are messy and takes it all in stride, laughing at the absurdity of their situation.

My favorite scene with Doug and Rachel comes when they found out Bart and Vienna had slept together. They tease him then turn to their son (who has to be about 5) and say, "Uncle Bart got laid!" And without missing a beat, the son yells "Congrats!" Then the family does a celebratory "Bart got laid" dance together in the kitchen. It was an absurd scene, like something from "New Girl."

But not all jokes land that smoothly. A recurring gag between Bart and Vienna is that she's actually going around the country giving people cancer. She takes on the name Cancer Girl for the joke, and it just made me cringe. That bit probably should have been cut from the script because it always fell flat.

Then there's the film's biggest weakness, its more dramatic scenes. When Bart and Vienna are just having fun together or sharing a touching moment, I'm onboard and fully immersed in their story. When the movie takes a more tense direction, and characters fight, I didn't buy it.

"Long Weekend" fails to make the sudden switch from comedy to drama. I'm reminded of how perfectly a show like "Scrubs" could pivot in an instant between making me laugh until I cried and then just cry. "Long Weekend" wasn't able to turn on a dime.

But that's really all I can fault the movie for.

The human moments are done well. When Vienna and Bart are simply trying to figure out how to love each other and how to live with some shred of happiness, that's where "Long Weekend" really succeeds.

I give big props to the film for making mental health such a pivotal theme to the story, and not in a giant sweeping way like "A Beautiful Mind," but a more down-to-earth understanding of the importance of therapy and encouraging people to get help when they're in mental anguish.

Perhaps the film's humanity is best summed up when Vienna says, "Just being a person is hard, huh?" And yeah, it is. Life is scary and unpredictable. "Long Weekend" shows that well.

"Long Weekend" is a fluffy romcom with a strange twist that mostly stands on the likability of its characters. The movie's biggest strength lies in its humanity. That's enough to make it a decent film.