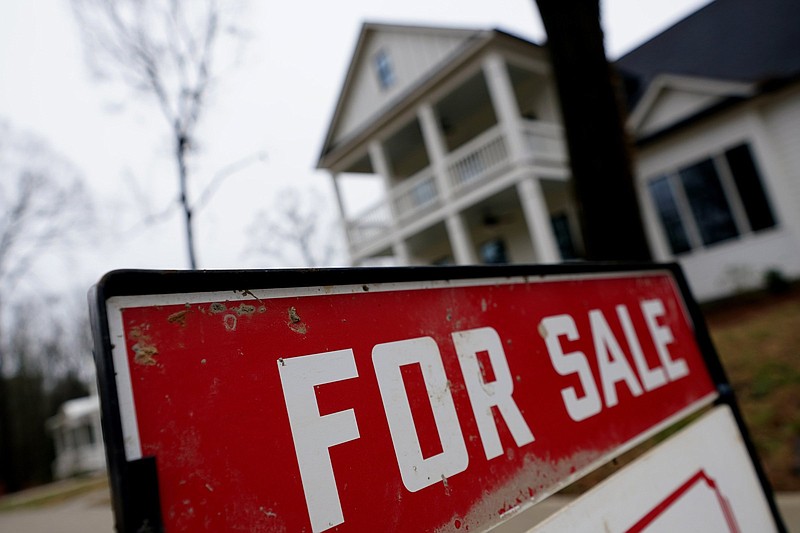 A new home is for sale in Madison, Ga., Thursday, Feb. 18, 2021. U.S. long-term mortgage rates rose this week but still remain near historic lows as the pandemic-hobbled economy strains toward recovery with more Americans getting vaccinated against the coronavirus. (AP Photo/John Bazemore)

Mortgage rates continued their upward march this week, rising to their highest levels since July.

According to the latest data released Thursday by Freddie Mac, the 30-year fixed-rate average rose to 3.05%. It was 3.02% a week ago and 3.36% a year ago. The 30-year average has risen for four consecutive weeks, something it hadn't done since April 2019.

Freddie Mac, the federally chartered mortgage investor, aggregates rates from around 80 lenders across the country to come up with weekly national averages. It uses rates for high-quality borrowers with strong credit scores and large down payments. Because of the criteria, these rates are not available to every borrower.

Because the survey is based on home purchase mortgages, rates for refinances may be higher. The price adjustment for refinance transactions that took effect in December is adding to the cost. The adjustment, which applies to all Fannie Mae and Freddie Mac refinances, is 0.5% of the loan amount. That works out to $1,500 on a $300,000 loan.

"Mortgage rates trended higher on the week as the market continues to gauge the economy's path forward," said Zillow economist Matthew Speakman. "By now, it's well known that mortgage rates are much higher than they were to begin the year, as a combination of increased inflation expectations and growing signals that the economy is recovering have propelled rates upward."

Their path remains uncertain, however, and could stall or even reverse along the way, Speakman said.

"February inflation data showed that despite the growing expectations, upward price pressures remain muted at least for now, and separately, an auction for 10-year U.S. Treasury bonds -- which tend to dictate the path of mortgage rates -- was met with firm demand," he said. "These two factors pushed Treasury yields downward and helped halt mortgage rates' recent upward momentum. So while the longer-term path forward for mortgage rates is almost certainly upward, these recent developments may indicate that the frantic upward trend in rates could subside in favor of more modest changes."

Bankrate.com, which puts out a weekly mortgage rate trend index, found more than half of the experts it surveyed predicted rates would stay the same in the coming week.

Meanwhile, mortgage applications fell last week. According to the latest data from the Mortgage Bankers Association, the market composite index -- a measure of total loan application volume -- decreased 1.3% from a week earlier. The purchase index grew 7% from the previous week, while the refinance index dropped 5%. The refinance share of mortgage activity accounted for 64.5% of applications.

"The housing market was very active the first week of March, setting the stage for what MBA expects to be a strong spring of home sales," said Bob Broeksmit, Mortgage Bankers Association president and chief executive officer. "Purchase activity increased to the highest level in four weeks and was up 2.4% from a year ago. The fast rise in mortgage rates in recent weeks continues to cool demand for refinances. Mortgage lenders are reporting that interest is still high, but activity did decline on an annual basis for the first time in nearly two years."

In a survey conducted by Fannie Mae, lenders expect their profit margins to decline for the second consecutive quarter.

"Despite continued strong expectations for purchase mortgage demand moving forward, many lenders are signaling caution about their profitability and market competitiveness," Doug Duncan, Fannie Mae chief economist, said in a statement. "This quarter, the largest net percentage of lenders in the survey history are expecting a decrease in their profit margin outlook. Those who expected a lower profit margin cited competition from other lenders as the primary reason."

The association also released its mortgage credit availability index that showed credit availability was unchanged in February. The index held steady at 124.6 last month. An increase in the index indicates lending standards are loosening, while a decrease signals they are tightening.

"Credit availability [remained] close to its lowest level since 2014," Joel Kan, an association economist, said in a statement. "The housing market is in strong shape heading into the spring, with robust growth in purchase applications, home sales, and new residential construction. Government credit supply has increased in five of the past six months, albeit in small increments, but remains tight by historical standards. This adds another obstacle for many aspiring first-time buyers who are already navigating supply and affordability constraints."