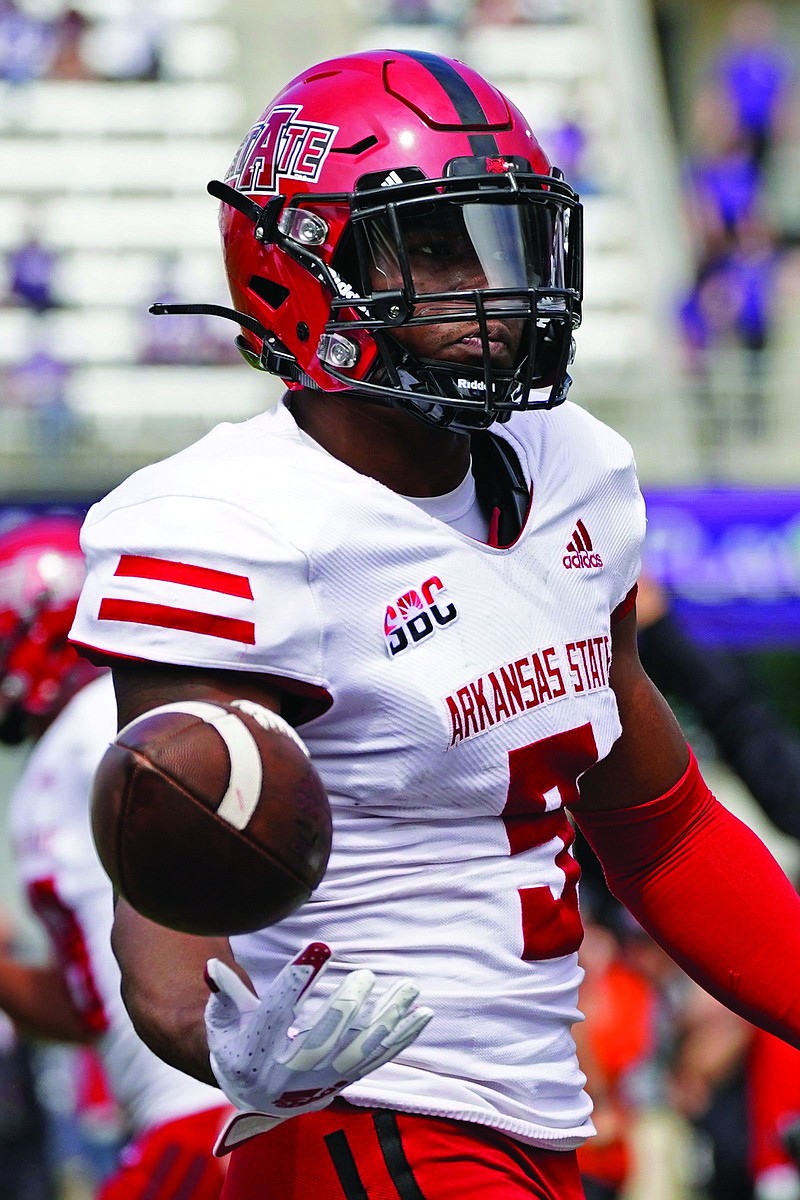 Wide receiver Jonathan Adams and four other Red Wolves participated in Arkansas State University’s pro day Friday in Jonesboro. Adams caught 79 passes for 1,111 yards and 12 touchdowns in 2020, and he was named the Sun Belt Conference offensive player of the year. (AP/Charlie Riedel)

Adams is expected to be selected during the 2021 NFL Draft, set to take place from April 29-May 1. In doing so, the native of Jonesboro would become the first Red Wolf drafted since defensive tackle Ryan Carrethers was taken by the San Diego Chargers in the fifth round of the 2014 NFL Draft.

The pro day offered Adams a final chance to prove himself in front of scouts from the NFL.

The 6-3 receiver impressed with a 39-inch vertical jump and caught passes from ASU quarterback Layne Hatcher inside the student activity center. Adams was joined by defensive lineman Forrest Merrill, running back Jamal Jones, tight end Giles Amos and deep snapper Seth Cottengim, who participated in their own position-specific drills.

Adams' star rose in 2020 when he caught 79 passes for 1,111 yards and 12 touchdowns. He finished top-five nationally in each category, and was named Sun Belt Conference offensive player of the year before receiving consensus second-team All-American honors . His 166 career receptions rank third in program history.

Adams moved to Dallas temporarily after his senior season to train at an EXOS training facility.

"I had never done training like that," Adams said. "I was ready to go experience it. I knew what kind of athlete I was and that I could be a better athlete. I knew that training there was going to help me and it really did."

Talent evaluators have questioned Adams' speed, and he worked specifically on increasing his 40-yard dash time during his training in Dallas.

He worked there with speed and agility coach Chris Givens, a former receiver who spent four seasons in the NFL from 2012-16. Givens took Adams' natural speed and added form and technique aimed at maximizing his pace both in the 40-yard dash and on the field. Adams left his pro day pleased with a 4.51-second 40 time.

"I know they wanted to see my speed," he said. "I bet they didn't know I was that fast. I knew from my training I was going to be faster than I was in the past. I believed in myself the whole time. I never had a doubt in myself."

Adams is confident about where he stands.

"I feel like I'm one of the top receivers in this draft," Adams said. "They've got whatever they've got on their draft boards. I'm sure someone has me as the fifth-best receiver in this draft, and someone else has me 17th.

"I think I got some people's attention today with my skills and athleticism."

Ahead for Adams over the next seven weeks is more training and interviews with interested NFL front offices, which in 2021 will be done virtually. Come draft weekend on April 29, he plans to be in Jonesboro as he waits to hear his name.

"I'll be at home with my family," Adams said. "We'll have a big family day, mostly likely."