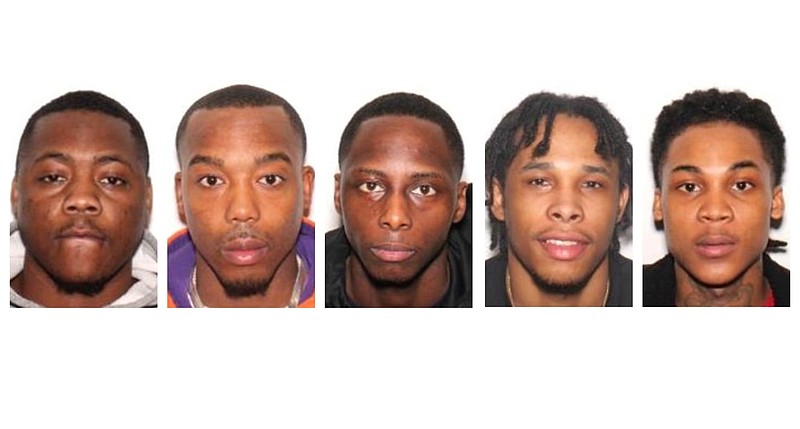 Five men are wanted in connection with a Thursday night gunfire exchange at Saracen Casino Resort that left a security guard shot in the abdomen.

"He did not have to have surgery and he is going to be OK," Saffa said, adding that the security member suffered a flesh wound and is at home resting.

No patrons were injured, both police and Saffa confirmed.

"Shortly after 11 last night, a couple of individuals were on the floor and behaving inappropriately," Saffa said. "They had been asked a couple of times to straighten up. They continued to behave inappropriately. We did what our security officers are trained to do, which is protect our patrons. To that end, they were respectfully but directly escorted off the property.

"To be clear, they were not a violent threat on the floor. There was no fight in the casino. They were behaving inappropriately in the casino, and they were escorted to the front door. Our officers are trained to de-escalate the situation."

"The suspect then re-entered the vehicle, sped off the property at a high rate of speed, exited, turned right and headed toward Stuttgart," Saffa said.

Wegner's report said that security members escorted some patrons outside, and it was in the parking lot where at least two of the patrons produced firearms. Wegner said gunfire between the suspects and security officers was then exchanged.

"Two of the suspects took potshots at casino security, leading to an exchange of gunfire," Saffa told a Pine Bluff radio station.

He clarified that statement to The Commercial, saying: "I mean that because I think it was a cowardly act by the individuals. I do not want to minimize their behavior. There's no question they took a shot at one of my coworkers."

It is not known how many shots were fired or for how long the shooting took place.

After the shooting, police say the suspects fled in a dark-colored passenger car, possibly a newer-model Nissan Altima.

Wegner said an exterior wall to the casino was damaged by gunfire and two cars in the parking lot were damaged.

Police are searching for five men, wanted for first-degree battery, in connection to the shooting. They are identified as Tirek Langel, 22; Kuro'n Lavell Brown, 21; Brandon Burnett, 27; Joshua McAfee, 27; and Dontarius Slater, 26.

"The casino staff cooperated with the investigation and its security system aided in the quick identification of the suspects," Wegner said.