Democrats slash fees to get on ballot 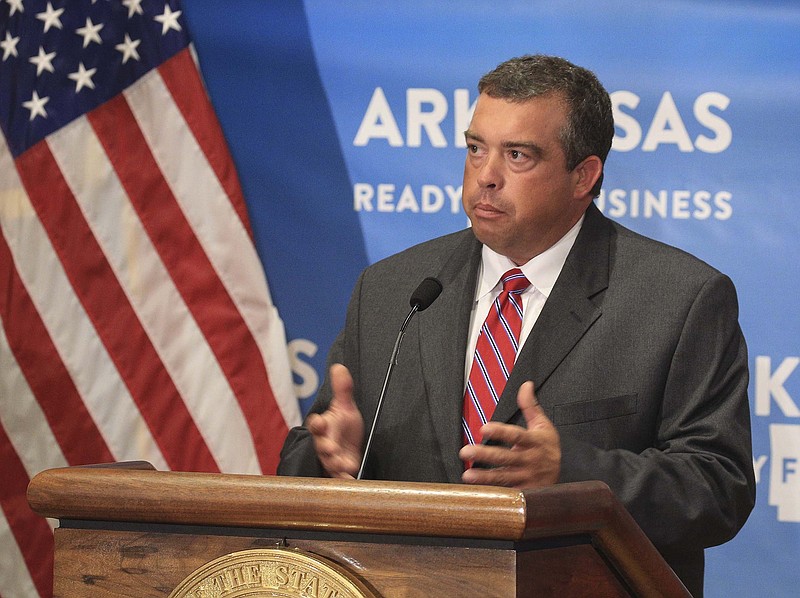 Democratic Party of Arkansas officials on Saturday sharply reduced or eliminated many of the filing fees for next year's elections, a move intended to spur competition and reduce the number of Republicans running unopposed.

Party Chairman Michael John Gray had urged activists to adopt the change, arguing that it would make it easier to recruit committed candidates.

After a vigorous Zoom-enabled debate, the party's state central committee voted 94-11 to lower the cost of appearing on next year's ballot for legislative, congressional and state constitutional office candidates. Two members abstained.

The party's executive committee had endorsed the move earlier in the day.

"We are entering a cycle where there is going to be large national attention to our election and opportunities to organize up and down the ballot everywhere we advocate it," Gray told central committee members. "The importance of having a candidate in every seat is always big, but it's never bigger than it has been right now."

The party has struggled to raise funds since losing control of the General Assembly, the state's constitutional offices and its spots in the Arkansas congressional delegation.

The party listed cash on hand of $48,180 in its year-end Federal Election Commission filing, along with debts and obligations of $143,107.

The filing fee change will result in a $100,000 reduction in revenue for the party, Gray told the Arkansas Democrat-Gazette.

During the previous election cycle, Arkansas' filing fees for state legislative candidates were the highest in the nation, according to a survey by the National Conference of State Legislatures.

In districts where the party had previously failed to field candidates, there was a tiered fee structure, starting at about $750, party officials said.

Last year, Democrats fielded candidates in only nine of the 17 state Senate contests. Republicans competed in all but one of the races.

The Democratic Party also surrendered nearly half of the House races, failing to field candidates.

The result was a Republican landslide.

A decade ago, when Democrats controlled the General Assembly, the party had a steady supply of aspiring officeholders.

Today, Republicans hold supermajorities, outnumbering Democrats 78-22 in the state House and 27-7 in the Senate, with independent Sen. Jim Hendren occupying the final seat.

"Arkansas has had the highest filing fees in the country for a long time," she said. "That's very disappointing to me as a Democrat, to me as a county chair."

Other Democrats opposed slashing the fees, arguing that it would degrade the caliber of candidates.

"Lowering these filing fees, I think we're just p in the wind," said Rep. David Fielding, D-Magnolia. "If you can't raise money to pay filing fees, then you don't need to be running. This is a bad, bad recommendation."

"I think everyone should pay some sort of fee ... for filing to run for legislative seats," she said. "They need to show some skin in the game."

Gray, a former state representative, expressed sympathy for this viewpoint, telling the committee, "I've run for office. I wrote the check. I've had to raise money. I understand it."

Lowering or eliminating filing fees increases the chances that the party will be able to field a full slate of committed candidates next year, Gray said.

"Don't let tradition and short-sightedness take our eyes off the goal of what we're trying to do," he said.

"I have taken a long look at this cycle and where we're going to be and the opportunity to have energy in places in the state we've never had it because of how awful the other side's going to be," Gray said, adding, "We have got to have people on this ballot."

Initially, the party had agreed to lower filing fees by 20%.

Under the proposal approved Saturday, the cuts will be far steeper.

In legislative races where no Democratic legislator is running, a candidate can avoid the filing fee altogether by obtaining support from either one of the district's county Democratic chairman or one of the party's executive committee members "from the congressional district in which the legislative district lies."

"At this time there is no talk to lower those fees," he said.

The fees set by the party's executive committee "reflect the quality of our candidates and the seriousness with which they approach their races," Mays said.

Saturday's Democratic Party meeting included breakout sessions on strategic planning and various reports, plus brief debate over a resolution "affirming the values of the Democratic Party of Arkansas."

The resolution criticized Sen. Larry Teague, D-Nashville, for his votes on six pieces of legislation, including a "total abortion ban," a "stand your ground" bill and legislation focused on transgender athletes.

His votes on those bills "are against democratic values and do not represent the Democratic Party of Arkansas," the resolution said, according to a copy posted by Young Democrats of Arkansas.