Lonely hearts cuddle cows for comfort when pandemic is too much 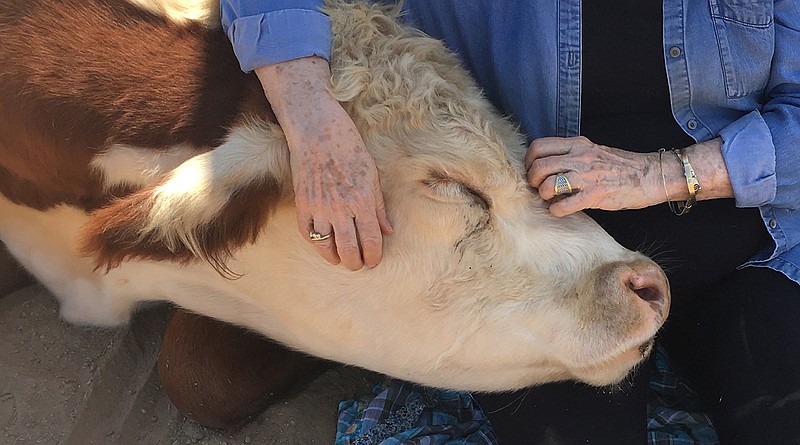 Jeannie Whalen, 76, hugs Moothias, whom she credits with comforting her after her husband, Walter, died in May. MUST CREDIT: Photo courtesy of Tina Karalekas

Renee Behinfar lives alone in Scottsdale, Ariz. The pandemic has been painfully isolating for her and has left her longing for warmth and touch.

On a recent afternoon, she finally was smothered in long-awaited hugs — by a 2,000-pound cow.

"It was really my first real hug of the year," said Behinfar, 43, a psychologist who sought out bovine comfort with a friend.

People are signing up to hug cows at sanctuaries across the country, many desperate for affection as the nation approaches a full year of social distancing during the pandemic.

When Sammy the cow, who was acquired from a dairy farm, laid her head in Behinfar's lap and fell asleep, Behinfar began to cry. The pandemic, she said, has been a time of unprecedented loneliness.

"In the end, I really didn't want to let her go," Behinfar said.

Behinfar brought a friend with her to Aimee's Farm Animal Sanctuary in Queen Creek, near Phoenix, to cuddle cows as a birthday present.

The farm has about 100 rescued farm animals, many with disabilities. Cow-cuddling sessions, which cost $75 an hour, are booked until July.

Owner Aimee Takaha says she gets about 20 calls a day for the service she has offered for five years. Business has picked up dramatically in the past year.

"They're just like happy pills, just to be around," she said of the cows.

The nine cattle at her farm include Adorabull, an Angus steer (a castrated male) rescued from a ditch; Moonicorn, who has one eye and one horn; and a miniature cow named Moochacha.

The bovines will amble over to guests for hugs and cuddles, she said. They also like to roll over on their sides and rest their heads in people's laps. Sometimes, a turkey named Azalea or a chicken will come by to join in. Participants often become emotional, she said, and some even vow to become vegetarian after looking deep into the creatures' large brown eyes.

The bovines helped Jeannie Whalen cope with grief after losing her husband, Walter, in May. She credits Moothias and other animals at Aimee's for comforting her.

"It brings a smile to my face and just a wonderful sense of awe," said Whalen, 76.

Cow cuddling is also popular in the Netherlands, where it is called "koe knuffelen."

Suzanne Vullers, who is originally from the Netherlands, offers cow-cuddling sessions at her 33-acre Mountain Horse Farm in Naples, N.Y., a service available to guests of the bed-and-breakfast for about three years. She and her husband, Rudi, offer hour-long sessions several days a week from May through October for $75. They book up quickly; a few weekends in May are already booked solid.

Vullers said it's a particular draw for city dwellers who have been cooped up and are seeking to immerse themselves in nature to de-stress. "Spending time with large animals like cows, it's one of the ways that you can do that," she said.

She added that the cows also enjoy the hugs.

"You cannot hug your friends, you cannot hug your grandkids. At this point, we still have to be careful," she said. "But as people, we have that need to be close to others. The cows are safe ... and they like that interaction as well."

In Hawaii, James Higgins runs the Krishna Cow Sanctuary on more than 40 acres of land on the Big Island with 67 cattle, including cows, calves, bulls and steers. He started offering $75 cuddling sessions about three years ago, and guests can even book through Airbnb.

Once in the sanctuary, three cows — Uma, Tulsi and Devi — eagerly come trotting at Higgins' call, he said.

When Higgins lies down, the cows typically do, too, he added. Then, the visitors lie down with the cows and snuggle up to them, scratching the inside of their fuzzy ears and under their necks.

Cuddling with these gentle giants — cows typically weigh 1,500 to 2,000 pounds — has an "extremely soothing effect," he said.

In India and within Hinduism, cows have been revered for thousands of years, Higgins said. He said his Hare Krishna faith, a branch of Hinduism, motivates him to care for and protect cows. He said he often bonds with his guests, who are also in awe of the cow.

"It's always an amazing experience," he said. "I feel like I'm best friends with the people afterwards."

Deirdre Roney, a lawyer who lives in the Los Angeles area and has a second home in Hawaii, went with her animal-loving daughter, Camille Cadarette, 26, to a cow-cuddling session at the Krishna sanctuary. Cadarette was enchanted, she said, and Roney learned a lot about cows.

"They're very big," said Roney, 58. "There's an intimidation factor there, but at the same time ... it was a letting-go kind of experience."

She said any fears she had evaporated once she got up close and petted a cow, then hugged it.

"It's just really sweet and peaceful," she said. 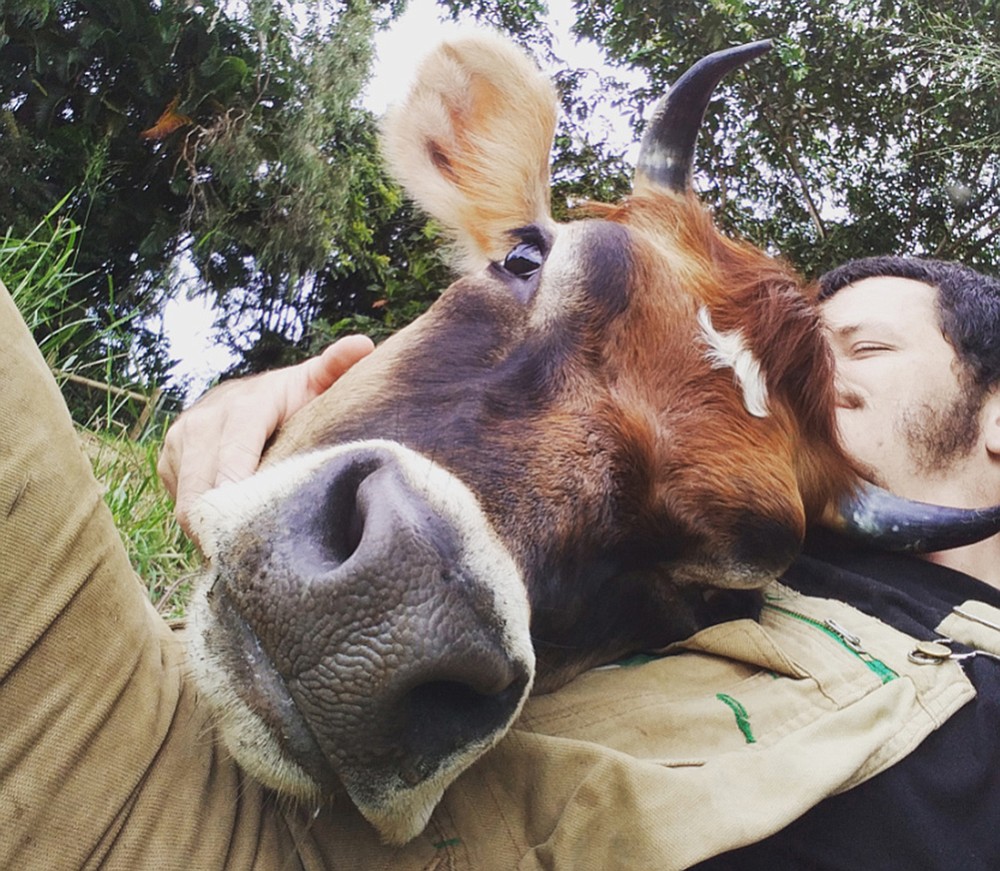 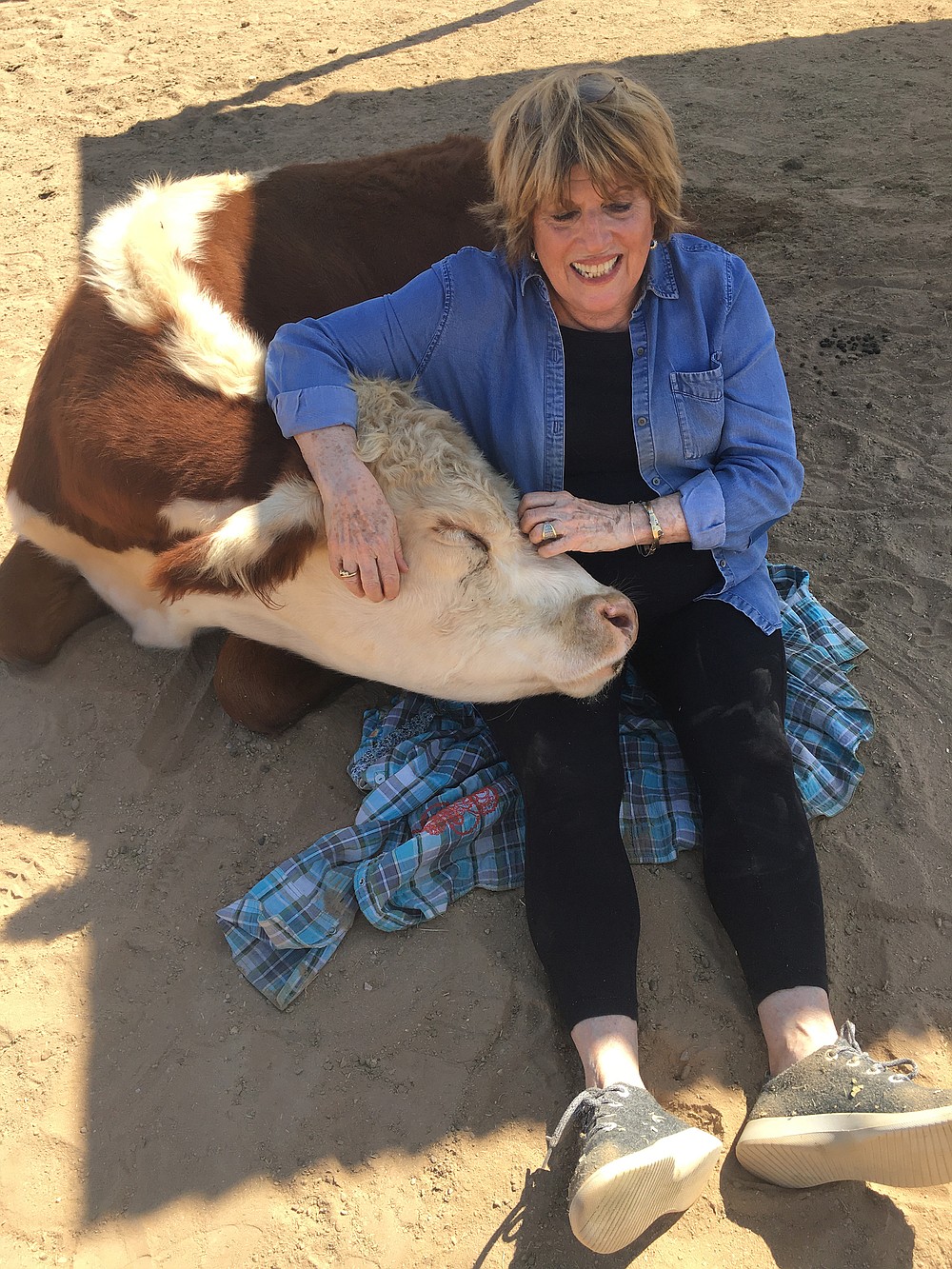 Jeannie Whalen, 76, hugs Moothias, whom she credits with comforting her after her husband, Walter, died in May. (Photo courtesy of Tina Karalekas)