Shut down and shut out: Louisiana Tech starter chews up top-ranked Arkansas 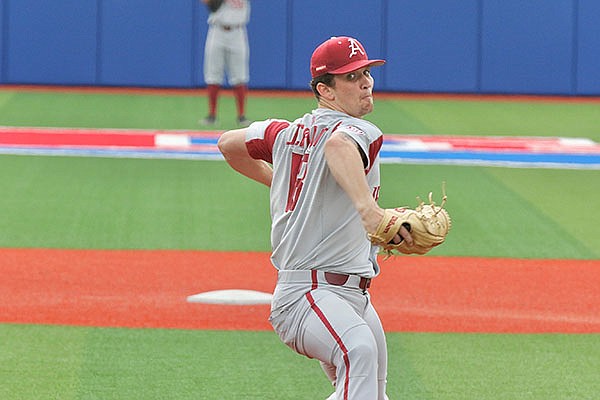 Whorff threw a 106-pitch complete game and didn't allow a base hit after the second inning of the Bulldogs' 2-0 victory over the University of Arkansas at Love Field in Ruston, La.

Whorff, who transferred from junior college last season, set a career high with 10 strikeouts and threw his second career shutout. He threw his first complete game last season against Troy.

Whorff said he cut his pregame bullpen short because he felt he was pitching well.

"Normally I would throw about 35 pitches in the pen ... and today I got my routine down earlier than all the rest of the days," Whorff said. "I was completely warm. I had first-inning jitters, and so there's no need to throw more and more and more when you're executing pitches in the bullpen. It was go-time after that."

Louisiana Tech (9-5) defeated a top-ranked team for the first time in program history and avoided a series sweep on its home field. The Razorbacks won the first two games of the series, 9-7 in 10 innings Friday and 8-1 on Saturday.

Arkansas (12-1) had a 16-game overall win streak snapped and fell six wins shy of matching the 1996 team for the program's best record to start a season.

"I thought it was a really well-pitched game by both teams," Arkansas Coach Dave Van Horn said. "There were a lot of strikes being thrown. We had maybe a chance or two and we just couldn't get that big hit, and they did."

Whorff kept Arkansas off balance with a three-pitch mix of fastball, change up and slider. The senior repeatedly got called strikes to the inside of left-handed batters and the outside of right-handed batters.

Whorff threw 84 pitches through the first eight innings, 64 of which were strikes.

"The zone was big ... and we kind of knew that and talked about it between innings," Van Horn said. "It was frustrating, but you've got to give their pitcher credit. He did a really nice job of getting ahead in the count and throwing a lot of strikes. He was throwing it where the umpire was calling it. If he's going to call it four or five inches in, throw it there."

Arkansas made Whorff (3-1) sweat through a 22-pitch final inning. Christian Franklin was hit by a 3-0 pitch, and Whorff missed high with a 3-2 fastball to Matt Goodheart to give the Razorbacks two runners with one out. It was the only walk issued by Whorff.

"We were going to live or die on that hill today. He earned it and got it done."

Franklin advanced to third base on a fly out by Cayden Wallace, and the runners were stranded on the corners when Brady Slavens was called out looking at a pitch on the inside corner to end the game.

"Chris Magourik, the umpire, he was calling that inner half, that glove-side fastball on both sides," Louisiana Tech Coach Lane Burroughs said. "He rung up a couple of our guys, and he kind of set the tone for his zone and what it was going to be. He didn't waver from it and Jarret did a great job pounding that part of the zone."

Whorff and Arkansas starter Lael Lockhart engaged in a pitchers duel for the first 4 1/2 innings that lasted 1 hour, 58 minutes. Lockhart retired eight consecutive batters to start the game and 12 of the first 13 he faced.

"You kind of knew it was one of those days you didn't want to fall behind," Van Horn said. "If you're going to fall behind, you've got to string together a bunch of hits because you probably aren't going to catch up with a home run because [the wind] was gusting in."

Louisiana Tech thought it had scored the second run earlier in the inning when Garcia ran home on a ball that got away from Arkansas catcher Casey Opitz, but Magourik ruled the ball hit batter Alex Ray in the foot and Garcia was sent back to third base to load the bases with one out.

"He really hadn't lost his stuff," Van Horn said. "A couple of those hits were off the end of the bat and they just kind of found their way into the outfield. I thought he pitched pretty well."

Whorff cruised through three innings pitching with the lead. Arkansas didn't put a runner on base in the sixth, seventh or eighth innings.

Franklin's hit by pitch in the ninth snapped a streak of 12 consecutive outs for Whorff, and he retired 23 in a row without allowing a hit.

The Razorbacks nearly had a leadoff base runner in the ninth when Robert Moore lined a ball into shallow left field, but Myers chased the ball down and made a diving catch for the first out.

"Robert hit that ball hard," Van Horn said. "We thought it was going to sit but it's almost like it hung up a little bit and he made a really nice play on it, a diving catch. If that ball gets down we've got the tying run at the plate at least three times. It was a huge play."