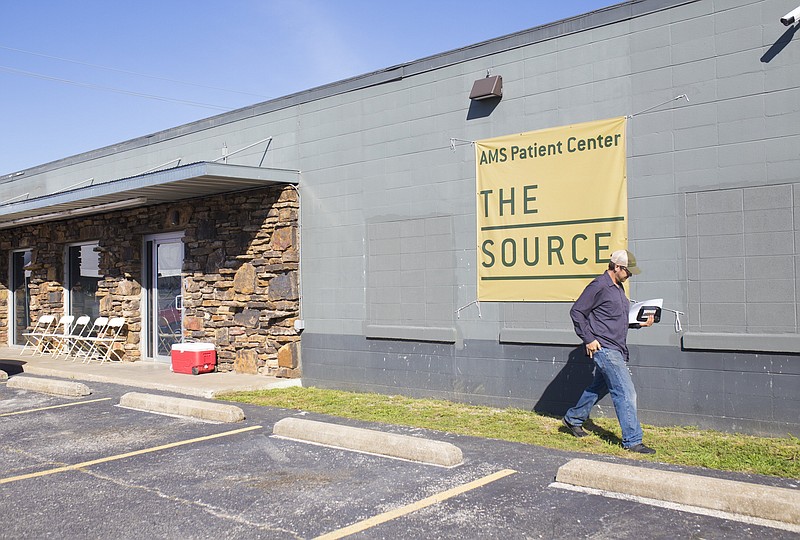 LaRee Treece of Little Rock received a medical marijuana card as soon as dispensaries started opening throughout the state in May 2019, but the cost of the dosage to treat her fibromyalgia is too much sometimes.

Patients like Treece pay more for the drug — which isn’t covered by insurance — than it costs in several other states in which medical marijuana is legal.

“I sometimes have to do without going to the grocery store in order to afford my medicine,” she said.

Medical marijuana patients and advocates say the drug can cost as much as $400 per ounce, or $50 per eighth-ounce. One gram at an Arkansas dispensary usually costs about $14, according to WeedMaps, a website that compares marijuana prices nationwide.

The use of cannabis varies from patient to patient, said Melissa Fults, executive director of Arkansans for Cannabis Reform, but she uses less than the average patient because an ounce lasts about a month and an eighth lasts about a week for her.

“For most people, it will only last a couple days,” she said. “If you’re smoking it, it goes a lot quicker.” Not all Arkansans who would benefit from using medical marijuana can afford it, but the structure of the market is determined by Amendment 98 to the state Constitution, approved by voters in November 2016.

The amendment allows for a maximum of 40 medical marijuana dispensaries, spread evenly throughout eight geographic zones established by the Arkansas Medical Marijuana Commission.

Currently 32 dispensaries are open, and six more will open this year. The commission decided in December not to issue the final two licenses, which would have added a fifth dispensary to both west-central and southwestern Arkansas.

Amendment 98 allowed eight marijuana cultivation facilities to supply dispensaries with most of their product. Five are currently operational, and the other three, which received their licenses last summer, are expected to open this year.

The amendment did not provide for any market oversight regarding prices, and the state Department of Finance and Administration had assumed cannabis prices would become more competitive as dispensaries gradually opened over the past two years, department spokesman Scott Hardin said.

“At the point we have 38 dispensaries and eight cultivators open, that’s the point when we can determine the health of Arkansas’ medical marijuana market,” he said.

There is no limit on how much marijuana the cultivators can grow, but the cap on the number of cultivators in the state keeps prices high at most dispensaries, Hardin said. This leads some users to buy marijuana illegally, whether on the streets or across the Oklahoma state line. Medical marijuana is significantly cheaper in Oklahoma, which has more than 1,700 dispensaries.

Josh Nicholson said his family is considering moving from Bentonville to Oklahoma so he, his sister and his father can use more affordable medical cannabis. Nicholson has been able to afford the medicine for himself, but at one point almost switched back to other prescription medication, which he said several patients have done because pills are cheaper than cannabis.

“My dad had to start back on an opioid regimen because he couldn’t afford the amount of medical marijuana he would need,” Nicholson said. “He’s fixed-income, so it’s difficult to afford it.” The District of Columbia and 35 states have legalized marijuana for medical use. Fifteen states and D.C. have completely legalized the drug.

Several dispensaries in Colorado, one of the first states to legalize recreational marijuana use, offer one gram of the drug for $5 to $10, according to WeedMaps. Marijuana has been decriminalized in Oklahoma, even though the drug is legal only for medical use there, and some dispensaries just west of the Arkansas border offer eighth-ounces for $10 to $30 and grams as low as $5.

David Couch, the Little Rock attorney who drafted Amendment 98, said he based the numbers of dispensaries and cultivators on calculations he made after studying the medical marijuana industry in New Mexico, which is similar to Arkansas in population and demographics. Like Oklahoma, New Mexico has decriminalized marijuana and made it legal only for medical purposes. Prices at dispensaries are comparable to Oklahoma’s, according to WeedMaps.

Arkansans with at least one of 18 qualifying conditions, ranging from anxiety disorders to Parkinson’s disease, are eligible for medical marijuana, but several factors determine whether a patient can actually receive it.

“It costs $250 to go to the doctor to get it verified, and then you have to pay another $50 just to get a card,” said Barbara Hicks of Sardis, who used medical cannabis when she was a cancer patient. “That’s $300 before you ever get an ounce of medicine.” Additionally, users might need or prefer different strengths or strains of marijuana, which might not be available at the nearest dispensary, said Kenton Byrd of Little Rock, who uses medical cannabis to treat two different conditions.

“You’re hit at every angle to obtain this medicine that many of us find necessary to stay away from more addictive or deteriorating over time medications that one can take in response to these conditions,” Byrd said.

Couch said he expected Arkansas to have about 30,000 medical marijuana patients, with each cultivator serving about 6,000.

As of Friday, there were 69,287 active marijuana patient cards, 689 visiting patient cards and 640 caregiver cards registered with the Arkansas Health Department. Arkansans have spent a total of $258 million on 39,039 pounds of medical marijuana since the first dispensary opened almost two years ago, Hardin said.

Couch said writing a fixed number of dispensaries and cultivators into the amendment was a lesson from the medical marijuana ballot initiative that narrowly failed with 49% of the vote in 2012, the first time the issue was on the ballot.

“One of the opponents’ [views] of it at the time was that you don’t want a marijuana dispensary on every corner like Starbucks,” Couch said.

The state Supreme Court invalidated some of the petitions to get the 2012 act, also known as Issue 7, on the 2016 ballot. Couch wrote the more-moderate Issue 6 in the weeks leading up to the 2016 election, and one key change was the removal of the “grow-your-own” provision in Issue 7.

Fults said at the time that she would support amending Issue 6 in a future election to allow more qualifying conditions and to control pricing. Now with a few years of the amendment in the rearview mirror, Fults said Amendment 98 “screwed patients from the get go,” and she considers herself lucky because she can afford the product and only uses it at night. She has expanded her view of how marijuana should be used in Arkansas after hearing from so many struggling patients.

“I never thought I would fight for recreational [use], but after what they’ve done with medical, we don’t have a choice,” she said.

One group has already begun petitioning to legalize recreational use of marijuana in Arkansas after an unsuccessful effort to get on the 2020 ballot.

Heather Outlier, who lives in Royal near Hot Springs, said she will sometimes go without medical cannabis if she cannot find a strain that effectively treats her chronic pain and post-traumatic stress disorder. An eighth-ounce of the product lasts about a day and a half for her; patients can only buy 2.5 ounces every 14 days, under Amendment 98.

“I’ve tried a lot of pharmaceutical medications prior to trying medical cannabis,” Outlier said. “They made me numb. I had no happiness and no sadness, and I would stay in bed 16 hours a day. When I’m on medical cannabis, I get out of bed and I socialize.” The state’s Compassionate Care program provides medical marijuana discounts to veterans, senior citizens and people with disabilities, terminal illnesses and financial need, but Outlier and Nicholson both said the program is not available at all dispensaries and not all low-income patients qualify for it.

Couch said not every cultivator sells to every dispensary. Dragan Vicentic, owner of Green Springs Dispensary in Hot Springs, can testify to this.

Vicentic advocated in June 2020 for the state Medical Marijuana Commission to issue the final three cultivator licenses allowed in Amendment 98. The commission had reserved those three licenses in case of a medical cannabis supply shortage. Only three cultivators were operational at the time, and Vicentic told the Hot Springs Sentinel-Record in September that he “was then blackballed by all of the cultivators from purchasing any products.” Customers had been expressing their gratitude to Vicentic for his marijuana prices, which have been as low as $5 or $15 for some strains, he said.

“At our busiest point [last year], when we were selling 400 pounds a day, people were telling us, ‘This is just as cheap as off the street, but why would I take the chance when I don’t know the quality of it and I don’t know where it’s been?’” Vicentic told the Democrat-Gazette. “Patients have told me that they quit buying off the street because when we were selling at $5, it was cheaper.” B u t b e i n g “ m o re p a - tient-interested than in profits” took a toll when low supply meant the dispensary had to raise prices and sales took a hit, Vicentic said.

Sales should return to where they were after the three new cultivators open this summer, he said, and two cultivators are currently supplying Green Springs: Natural State Medicinals in White Hall and Good Day Farm in Newport, soon to be in Pine Bluff.

Alex Gray, a Little Rock attorney and one of the managers of Good Day Farm, said the cultivator expects to be up and running at its Pine Bluff location by the end of March or the beginning of April, producing 20 times the product it currently produces. Gray also said Good Day Farm will sell to all dispensaries statewide.

Hardin and Gray both said the addition of new cultivators to the market should drive cannabis prices down. The other four cultivators in operation could not be reached for comment.

Most potential changes to the state’s medical marijuana industry would have to be made through legislative action or another ballot initiative, but Couch said dispensaries and the state can take a few actions to make the product more affordable for more patients.

Eight of the 32 operational dispensaries have received licenses from the Alcoholic Beverage Control agency to grow their own marijuana plants. Amendment 98 limits the dispensaries to 200 plants, with only 50 mature ones at a time, so their harvests are supplementary and not meant to sustain the dispensary’s entire supply.

If every dispensary grew its own plants, they could create a cooperative, which would allow cost sharing and easy inter-dispensary trade and sales, Couch said. State law requires dispensaries to grow marijuana plants in the same building in which they sell the product, but Couch said it would be easier for some to grow the plants in a separate facility on the same property.

The Medical Marijuana Commission and the Alcoholic Beverage Control agency could require all cultivators to sell marijuana to any willing dispensary, avoiding problems like Vicentic’s in the future, Couch said.

“If a dispensary wants to make a very small markup on it and attract a large volume, it’s pure economics and they should be able to do that,” he said.