TELEVISION: Travel shows offer escape to those in lockdown 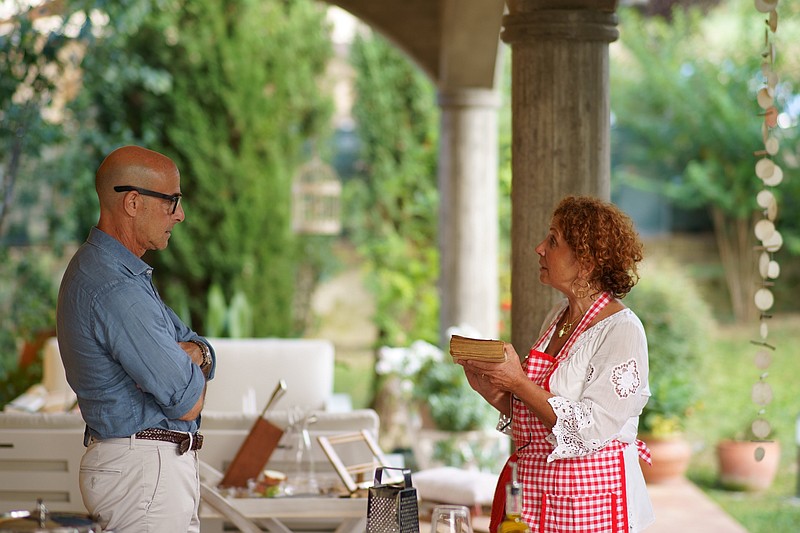 Stanley Tucci travels across Italy to discover the secrets and delights of the country’s regional cuisines in “Stanley Tucci: Searching for Italy” on CNN. (CNN photo)

With a vaccine rollout underway, it's finally feeling like the days of being stuck at home could be drawing to a close. People are dreaming of (and booking) summer travel; airlines are adding exciting new routes instead of having to cut them. But before we had hope, we had travel television shows that kept us fantasizing about all the places we couldn't go.

For some people, travel shows are a way to explore adventurously or immerse ourselves culturally without leaving the house. For others, they're a planning resource for future trips. The travel TV that debuted during the pandemic enabled us to do all of that and more.

Here are five fan favorites, and what they meant to homebound travelers.

◼️ "Stanley Tucci: Searching for Italy." Stanley Tucci. Where do we even begin. Former model, Oscar-nominated and Emmy Award-winning actor, viral cocktailian. America's favorite supporting actor finally has his time to shine in this CNN series. In this role, Tucci gets to bon vivant his way around Italy, sampling prosciutto di Parma in Emilia Romagna, eating his favorite pasta on the Amalfi Coast and drinking from the country's centuries-old wine windows.

From her home in Washington, Savannah Wormley has been watching Tucci's show since its premiere in February. It fit in with the other travel and food shows she has been drawn to this past year, like "Chef's Table" and "Foodie Love."

"I think it's such a great escape from everything that's going on right now," Wormley says. "I especially love the food shots, and I think it's great to watch Stanley interact with Italians and learn about the food they eat. You can tell it brings him so much joy."

◼️ "Men in Kilts." For a spotlight on Scottish culture and landscapes, check this out on Starz. The show follows "Outlander" actors Sam Heughan and Graham McTavish as they dive into the food, drinks and traditions of their native land. It's a love letter to Scotland told through banter-filled road trips.

For Angel Lunsford in Salem, Ala., "Men in Kilts" has been helpful and hilarious. Since before the pandemic, Lunsford and a friend have been planning a trip to Scotland for 2022. They've both been watching "Men in Kilts," as a way to discover more points of interest to see and cultural experiences to try. They have also found new restaurants and types of food they'll seek out on their trip.

"We wouldn't have known about them had we not seen the show," Lunsford says.

◼️ "Taste the Nation." On Hulu, this show follows award-winning cookbook author and longtime "Top Chef" host Padma Lakshmi as she travels around the United States telling the country's food stories. The show, which stops in places like El Paso, Milwaukee, Las Vegas and Honolulu, is a celebration of the immigrant communities that shape American culture.

Andrea Alexander started watching the show in May at a time when travel seemed far, far away. She loved learning about food and the people who make it, as well as the show's focus on their struggle with marginalization. While staying at home with her family, Alexander says, Lakshmi's show helped her travel vicariously in a way other television shows couldn't.

"I couldn't go to restaurants. I couldn't, like, see the world on a plane, so it helped in that regard," says Alexander, who lives in Rochester, N.Y.

◼️ "Down to Earth with Zac Efron." People familiar with Zac Efron may know him as Troy Bolton from the "High School Musical" trilogy. But with his Netflix show, the actor has reintroduced himself as a champion for the natural world. Efron travels to places such as Costa Rica, Sardinia and the Amazon rainforest to bring awareness to environmental concerns, and he dives into unique experiences — like ayahuasca tourism — along the way.

At home in Santa Barbara, Calif., where she raises her young family and a brood of chickens in the backyard, Katherine Guzman Sanders and her husband got into Efron's show after watching the trailer by mistake.

"Their traveling was really hardcore," she says. "But sometimes those are the kinds of shows I like to watch, where they do what I don't necessarily want to do, but at least I feel like I had that experience."

◼️ "Bare Feet with Mickela Mallozzi." PBS debuted a two-part special of the show in February highlighting Carnival in a year without Carnival. Host Mickela Mallozzi traveled to the French Caribbean to showcase the holiday in the Guadeloupe islands, exploring the music, dance and Guadeloupean Black identity.

Jason Watson, a self-proclaimed "PBS geek" in New Hyde Park on Long Island, was already a fan of the station's food and travel shows, such as "Eating In with Lidia." When "Bare Feet with Mickela Mallozzi" came on, he loved the show's travel, music and dance concept, which reminded him of Anthony Bourdain's work.