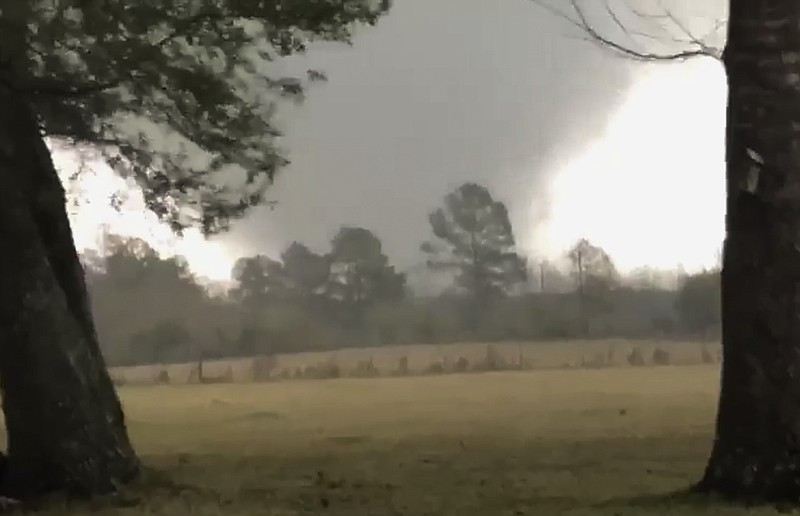 This photo provided by Heather Welch show a tornado in Rosepine, La., Monday, Dec. 16, 2019. Strong storms moving across the Deep South killed at least one person Monday and left a trail of smashed buildings, splintered trees and downed power lines the week before Christmas. (Heather Welch via AP)

Signs point to potentially dangerous weather today across portions of Arkansas and in surrounding states, with the possibility of strong tornadoes stretching from Texas to Georgia, according to the National Weather Service.

Most of Arkansas, as of Tuesday night, was included in an “Enhanced Risk” category for severe weather this afternoon and evening. Much of the eastern half of the state — in a line stretching from Jonesboro to just west of Conway and farther south — was included in the more severe “Moderate Risk” category.

Severe weather — including tornadoes of EF-2 or stronger, baseball-size hail and wind topping 80 mph — will be possible, according to the weather service.

“The potential for widespread severe activity is prevalent in much of the eastern and really almost entire state,” said meteorologist Erik Green with the weather service’s North Little Rock office. “The ‘moderate risk’ you don’t see put out very often. Each of these categories has a threshold of probability of your chance of seeing severe weather. Moderate risk is used if there’s a 30% chance of damaging winds and large hail.” A moderate-risk outlook is considered similar to intense storms that an area may experience once per year or less; a high-risk outlook involves a very intense storm experienced once or twice in a lifetime, according to the weather service.

A warm front early this morning is forecast to produce severe weather — with the biggest risk being large hail — in southern Arkansas as it moves north. A cold front is forecast to move west to east across the state in the afternoon, increasing the risk of more hail, damaging wind and tornadoes.

Tornadoes that stay on the ground for an extended period are possible in large parts of Arkansas, Mississippi and Alabama, as well as parts of Louisiana and Tennessee, forecasters said. Residents need to pay attention to alerts in cities, including Memphis, Birmingham, Ala., and Jackson, Miss., forecasters told The Associated Press.

More than 6 million people live in the area stretching from eastern Arkansas to eastern Alabama, where experts said the risk for violent weather is highest today, according to the AP.

The potentially dangerous weather comes nearly a year after a tornado tore through Jonesboro, injuring a half-dozen people and causing significant damage, including at the Mall at Turtle Creek and the Jonesboro Municipal Airport.

Jonesboro’s street department was out checking ditches and drainage systems, especially in low-lying areas, for possible clogs Tuesday to help mitigate any flooding that may occur with the storm, the city’s Chief Operating Officer Tony Thomas said.

“We, like most people, are definitely watching the forecast closely,” he said. “As you’re going through your day tomorrow, just be mindful of the changing weather patterns. I’m telling people to be near your phone or a television to receive updated information throughout the day.” A spokeswoman for the Arkansas Department of Emergency Management said the agency was hoping for the best but preparing for a “rough day” today.

Green said everyone should check the forecast regularly and have multiple ways to stay informed — TV, online news, radio and mobile alerts, among others. Many cities have sirens that activate when the area is under a tornado warning, however, they are meant to alert people outside.

A “tornado warning” means a tornado has been sighted or indicated by radar and there is imminent danger to life and property, according to the National Weather Service. A “tornado watch” means tornadoes are possible in and near the area. That’s a good time to review and discuss emergency plans and check supplies.

When under a tornado warning, people should seek shelter in a safe room, basement, storm cellar or an interior room without windows on the lowest floor of the building, according to the weather service. Mobile homes, tents, sheds and storage facilities are not safe shelter structures.

Being in a vehicle is also not safe. For drivers, the best course of action is to get to the closest shelter. If that’s not possible, they should get low in the car and cover their heads, or abandon the car and seek shelter in a low-lying area such as a ditch or ravine, the weather service advises.

Today, Little Rock has a 30% possibility of hail 1 inch in diameter or larger and 60-mph or higher wind. The city has a 15% possibility of a tornado, according to a 4 p.m. Tuesday briefing from the National Weather Service in North Little Rock.

In Alabama, at least 10 school systems canceled classes or planned online sessions because of the weather threat, the AP reported Tuesday. In Tennessee, Shelby County, which includes Memphis, canceled coronavirus vaccination appointments for today because of the threat of severe weather.

Meteorologists issued tornado warnings Tuesday afternoon in southwest Alabama as storms moved through, but no damage was reported, according to the AP.

Storms dumped as much as 6 inches of rain in Mississippi and Alabama by Tuesday evening, with isolated flooding reported in western Alabama, according to the weather service Storm Prediction Center.

“‘We did get a strong band of pretty heavy precipitation,” said Ashlyn Jackson, a forecaster in the weather service office in Jackson, Miss. “We’ve been getting hit pretty hard.” All thunderstorms carry the potential for lightning and flooding. While Arkansans are less likely to see widespread flooding because of the speed of today’s storms, there is an isolated risk of flash floods, Green said.

The storms coincide with the National Weather Service’s flood safety awareness week. Over the past 30 years, floods have killed an average of 88 people a year and caused about $8 billion in damage in the United States, according to the National Oceanic and Atmospheric Administration. Tornadoes killed an average of 68 people and lightning killed 41 during the same period.

Arkansas ranks third in flood deaths with 67 fatalities since 2010, according to the weather service. Texas ranks first with 227 deaths, and Missouri is second with 68.

“On average, flooding and flash flooding are a leading cause of weather-related damage across the nation and throughout Arkansas and have resulted in the loss of life of Arkansans and have caused damage to homes, businesses, and farmland throughout every part of the state,” according to the 2021 Arkansas Flood Safety Awareness Week proclamation signed by Gov. Asa Hutchinson.

During flooding, people should stay informed, avoid areas subject to flooding and avoid driving over flooding roads, according to the weather service. Even 6 inches of fast-moving floodwaters can knock someone off their feet, and a depth of 2 feet will float a car.

Nationwide, more than 50% of flood-related deaths occur in automobiles. The next-highest percentage is high-water drownings involving people walking into flooded areas usually near swift current where they can be swept away, according to the weather service.

Updated forecasts and severe weather preparedness information can be found at www.weather.gov.