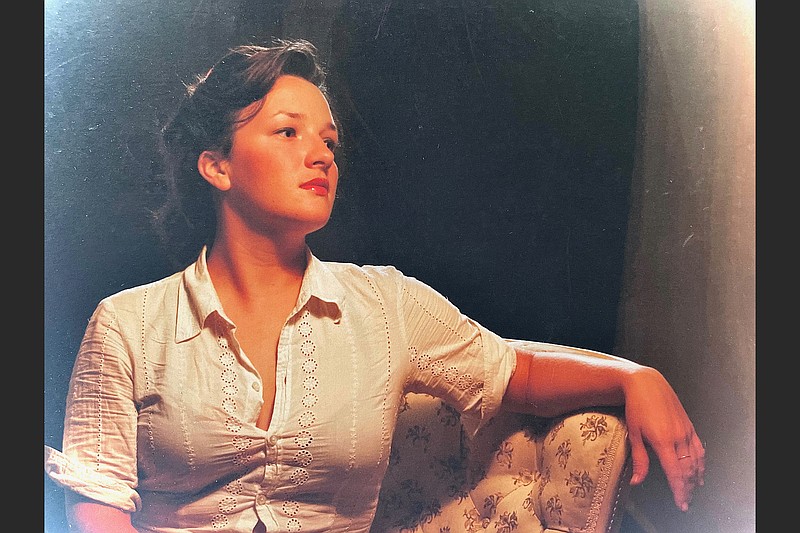 Singer-songwriter Bonnie Montgomery’s latest album, “Boat Songs 2002,” is a collection of folk songs and spoken-word vignettes about her journey aboard a freighter to China. (Special to the Democrat-Gazette/Jim Yates)

In July 2002, singer-songwriter Bonnie Montgomery was 22 years old and on a slow boat to China.

Well, maybe it wasn't that slow.

The Searcy native booked passage on a German-owned, Russian-operated freighter and shipped out of Seattle on a 19-day voyage across the Pacific, bound for Hong Kong and eventually Jinzhou, China, where she taught English at Jinzhou University.

And along the way, as sometimes happens in these situations, there was a shipboard romance with a handsome Russian sailor.

Montgomery relays the experience on "Boat Songs 2002," a fascinating time-capsule of music and spoken-word interludes about her journey.

The songs, home recordings from 2003, are stripped-down folk pieces with Montgomery accompanying herself on guitar, piano and viola. The spoken-word vignettes find her backed by piano and reading from journal entries she made during the trip. They sound almost like sonic relics from the early 20th century. She calls the record "the most vulnerable, personal album I've ever put out."

Montgomery's musical range is wide. She is classically trained and co-wrote "Billy Blythe: A Modern Folk Opera," about young Bill Clinton, with Britt Barber. She was featured last year on "Call Out," a virtual album and celebration of female composers by Broadway and Metropolitan Opera star Zachary James.

And she's just as much at ease in honky tonks, winning entertainer of the year at the 2020 Arkansas Country Music Awards; Americana/roots artist of the year in 2019 and best female vocalist in 2018. She was also the top outlaw female artist at the 2016 Ameripolitan Awards.

She has recorded with Rosie Flores, Matt Ward and Dale Watson and was a member of the Wallflower Revue with Mandy McBryde and Amy Garland Angel. In 2018, she released her second LP, "Forever."

In the following interview, which has been edited for clarity and length, Montgomery, who lives in Wimberley, Texas, talks about the pandemic-related inspiration for releasing "Boat Songs," being one of just two women on a ship full of dudes and the fine line between youthful courage and recklessness.

Tell me about this trip.

I got a job at a university in China after I got my [degree] and I wanted to travel and work over there, but I didn't want to fly. I've been talking about this more openly — I'm a commercial airline plane crash survivor [Montgomery was on American Airlines Flight 1420, which crashed June 1, 1999, at then-Little Rock National Airport and left 11 dead].

I didn't want to fly [to China]. I wanted to experience the distance in real time, so I found this cruise line, Freighter World Cruises, that takes passengers on freighters all over the world. I got on in Seattle and I got off the boat in Hong Kong. It was 19 days at sea.

And you were writing everything down while you were on the freighter?

Yeah. I was writing my thoughts and observations and my feelings. On the album, between the songs, there are these vignettes where I'm reading my writing over piano variations of the songs.

What was the impetus to create an album like this, with the spoken word pieces between the songs?

The songs told the story of some of the journey, but the writings were a whole other thing. The songs could have stood alone, but I felt like the writings could help paint a better picture of where these songs were coming from. It was an inspiration that I couldn't let go of; I had to include the writings.

What was it like revisiting these songs and journal entries about this great journey in a time when you couldn't really travel or tour?

In all my travels in all my life, those memories just flooded me this past year during the pandemic. I was reminded of that feeling of time being suspended, like it felt on the boat. I started to really reflect on some of the adventures I've had and how I can share some of those with my audience.

There's an endearing rawness to the sound of the whole thing. And the vignettes have an almost old-timey feel. Is that accurate?

I recorded these songs onto a cassette in 2003 and that's why they sound so analog, which is a nice way to put it [laughs]. I recorded the piano things and the spoken word this year in my living room in Wimberley and I sent everything to my friend Kevin Skrla, who mixed and mastered it and his studio [Wolfe Island Recording Co.] in Houston. He used some of those old Willie Nelson records and demos as a model for the production.

Yeah. I've always called my piano songs "parlor songs." I grew up practicing the piano for hours every day and playing through Stephen Foster's catalog. I feel like they harken back to this American tradition of people sitting together in a parlor room and listening and being entertained. It's not necessarily country or folk, it's parlor songs. This was sort of like doing the opera in a bar back in the day. I couldn't find anyone else who had done this in the same way and so I just sort of did it my way.

The shipboard romance with the Russian sailor is a sweet tale of the first stages of a crush. Have you kept in touch with him?

I don't know anything about him any longer. I haven't kept up with him. I kind of hesitated to use his real name, but I have some actor friends who said you have to use his real name. The subtext and the way you speak it wouldn't be the same if you changed it.

There were so many writings from the boat, but this little fling I had, I think everybody could use a little youthful romance right now and that's why I focused on that thread.

I was basically teaching English classes through music. I loved it. I exposed those kids to Beethoven, Bob Dylan, the Beatles. They had never heard any of that. I taught there for a semester and then traveled around for a few months.

How do you feel looking back, almost 20 years later, on this trip and this time in your life?

I was full of wanderlust beyond any reason, otherwise I probably would not have done it. That youthful, invincible feeling was definitely driving me then. I think now, I would be a lot more measured and calculated. I don't know if I would take a boat like that now that I've done it when I know I could get on a plane and be there and go to a beach. I like my creature comforts a little more now.

But I've been thinking a lot about what it was like to be that young and be a woman on a boat with German and Russian men — there were also some Pacific Islanders. There was one other woman; she was German and had been all over the world on these freight boats and was like one of the sailors. She was really cool.

But I felt in the spotlight on that boat and I may have handled that differently now. I think I might have understood the amount of danger I was in. I was sort of a Pollyanna in my mind about that and I let my guard down some and I had moments where I was pretty scared. I remember thinking, am I really stupid or am I really brave? But I made it fine and they actually did show me a lot of respect. In my 22-year-old mind, the line between bravery and stupidity was blurry.

Order the album or preview a track at bonniemontgomerymusic.com