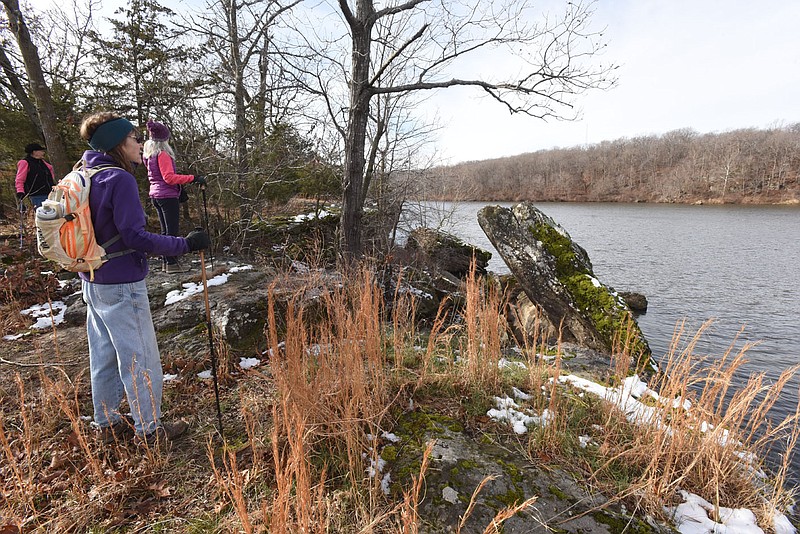 Hikers and mountain bikers can circle Lincoln Lake on the main trail and expore some side-trail loops. Sheila Ross (from left), Karen Mowry and Carol Taylor take in the scenery on Dec. 18 2020 from a high point on the trail. (NWA Democrat-Gazette/Flip Putthoff)

Hikers, kayakers and mountain bikers get plenty of bang for their recreational buck at Lincoln Lake.

There's so much to do at the 90-acre lake, it'd take a small trailer to haul enough gear to sample it all. A trail around the lake is open for hiking and mountain biking. The water is a boulder-studded paradise for paddlers. Rock climbers, bird watchers, anglers and Sunday drivers all flock to Lincoln Lake.

The watery gem shimmers at the center of 400-acre Lincoln Lake City Park. Little development at the park gives the lake its wilderness quality.

Winter and early spring are prime times to visit the park and lake. Scenic vistas abound on a hike or off-road bike ride through the open wintertime forest. Bald eagles and waterfowl are sights to behold on the water. It's easy to spot woodpeckers and songbirds among the leafless trees.

It's a 4.25-mile trek on the main trail to circle the lake. Companion loops here and there make for a trail network of about 7 miles. The trail is rocky and rugged in spots and mostly moderate in difficulty.

A sign on U.S. 62 in Lincoln points the way to Lincoln Lake. Drive north on Washington County 669 four miles to the lake. The gravel parking area is on the right at the bottom of a steep hill.

From here hikers and bikers can travel clockwise or counterclockwise around the lake. Five hikers at the lake in December opted for a shorter out and back hike that quickly led to bluff-top views high above the sun-splashed water rippled by a winter breeze.

Starting at the information signs, hike to the right and gradually uphill. Soon the trail makes a U-turn and meanders through the woods. Dazzling vistas of Lincoln Lake unfold about a mile into the hike.

The group took in lofty sights from the top of jagged cliffs, then followed a level trail through the forest to the Eagle View overlook. An optional loop trail starts at the overlook and heads toward the water.

Visitors might see Doug Hutchens, mayor of Lincoln, biking or hiking the trails.

"It's getting busier and busier," he said.

New trails in Siloam Springs and nearby towns are bringing more visitors to west Washington and Benton counties, Hutchens noted. Many of them come to Lincoln Lake. The WOKA whitewater park under construction on the Illinois River near West Siloam Springs, Okla., will draw more visitors westward, Hutchens predicted.

Lincoln Lake was built around 1962, the mayor said, for a city water supply and flood control. Lincoln Lake and Bob Kidd Lake, near Prairie Grove, are among projects built in part to reduce flooding of streams that are tributaries of the Illinois River.

Adventurers sampling the menu of outdoor opportunity at Lincoln Lake can thank platoons of volunteers who take care of the trails and park.

David Justice, who works part time for the city of Lincoln, is involved with trail maintenance, Hutchens noted. Ozark Off-Road Cyclists do a lot of work at the lake. Area rock climbers pitch in as well.

As winter marches toward spring, more anglers will cast their lines, particularly for largemouth bass. Arkansas Game and Fish Commission did an electrofishing study at Lincoln Lake in March 2017. The research turned up lunker bass of 8 and 9 pounds.

Lincoln Lake City Park, including 90-acre Lincoln Lake, is 4 miles north of Lincoln. Turn north at the sign for Lincoln Lake along U.S. 62 at follow the road to the lake.

Neither camping nor fires are allowed. Only paddlecraft or electric motors are permitted on the lake. No gasoline engines. Fishing is permitted, but anglers who want to fish at night must obtain a nighttime fishing permit from the city.