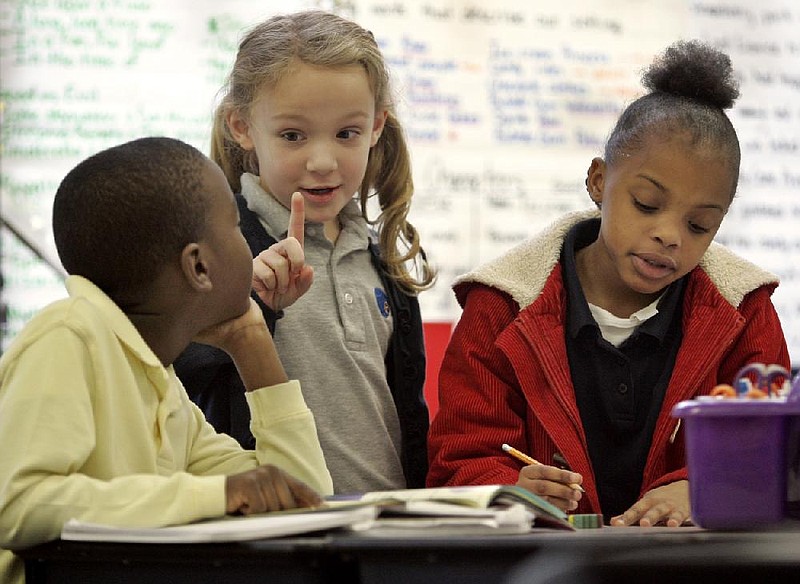 Arkansas Democrat-GazetteBENJAMIN KRAIN --11410--Second-graders Kandall Marshall, left, Lauren Esten and Jayda Butler participate in class at e-STEM Public Charter School Thursday morning. Roy Brooks, the CEO of e-STEM announced Thursday that he will be resigning at the end of the school year.

Seven organizations have submitted letters of intent to apply for state-issued charters to enable them to operate eight open-enrollment charter schools starting in the 2022-23 school year.

Back up: What exactly is a charter school?

Open-enrollment charter schools are taxpayer-funded campuses that are operated by not-for-profit organizations.

The school planners can seek and obtain waivers from some state laws and rules that apply to traditional districts. In return, charters are to be held to a stricter level of accountability for student learning.

What is a letter of intent and what does it have to do with opening a charter?

To open a charter school, organizations must apply and be approved for a “charter” from the state. A limited number of charters are available each year.

Prior to actually applying, the organizations write a letter of intent signaling to the state their hope to open a school.

Typically, not all of the school planners who submit letters of intent follow up with applications.

Who has recently issued letters of intent for the 2022-2023 school year?

Six of the eight proposed schools would be in Pulaski County, according to the letters of intent sent to the Arkansas Division of Elementary and Secondary Education. The remaining two would be in Hope and Fort Smith.

Among the proposed schools is one that would focus on serving students who have suffered trauma. Another proposal would offer a JROTC/emergency responder-themed curriculum.

Go here for full details on all the proposals.

How many charter schools can be approved this year?

Arkansas has eight charters available to award for the 2022-23 school year.

They depend on the state Board of Education’s approval of applications.

If all eight were handed out, there would be a total of 34 approved charter schools in Arkansas.

Read more on the proposed schools and what they would offer students from education reporter Cynthia Howell.