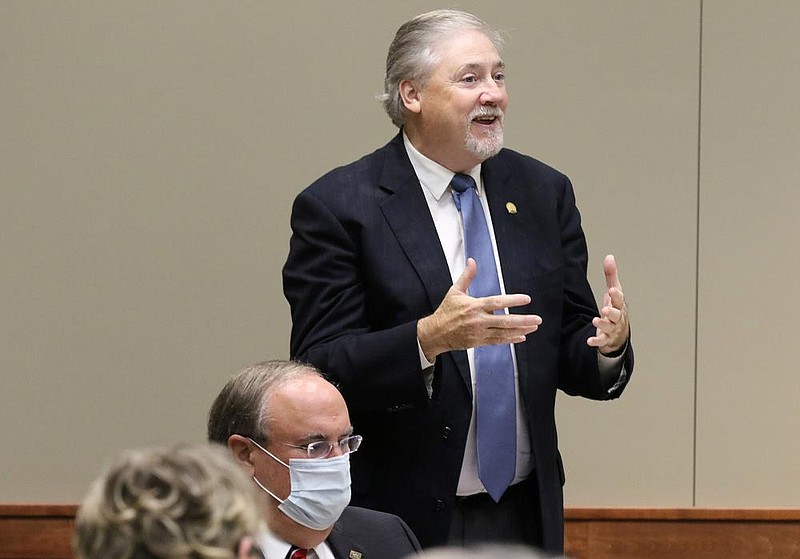 House lawmakers voted down legislation Wednesday that would make it more difficult for a custodial parent to move long distances within the state after a divorce.

House Bill 1006, by Rep. Mark Lowery, R-Maumelle, would require a custodial parent moving more than 75 miles across Arkansas to petition the court to change residences — allowing an ex-spouse to file an objection.

Lowery, recounting his own experience going through divorce, called separation “one of the most painful dynamics that a child can undergo” and said one parent should not be able to take the child away from another by moving.

Opponents of the bill, however, raised concerns about its impact on single mothers and victims of abuse.

Rep. Ashley Hudson, D-Little Rock, said HB1006 would create “another weapon in the arsenal of parents who want to hold the other parent hostage.” The bill failed 40-44, with six members voting present. The bill needs 51 ayes to pass.

Legislation that would add restrictions on medication abortions, often referred to as the “abortion pill,” passed the House 76-15 Wednesday.

House Bill 1572, by Rep. Robin Lundstrum, R-Elm Springs, would require a doctor performing a medication abortion to inform patients about the risks of the procedure and about “reversing the effects” if the women change their minds. It also would require a 72-hour waiting period before the abortion.

According to the Department of Health, medication abortions made up 41% of the abortions in the state in 2019. That percentage has risen sharply as lawmakers have passed restrictions on other types of abortions.

Earlier this month, Gov. Asa Hutchinson signed legislation banning all abortions except for those to save the life or health of the mother. Opponents have vowed to challenge that law in court.

No one spoke against HB1572, which now heads to the Senate.

Senate lawmakers advanced legislation Wednesday that would require an abortion clinic to report a rape to law enforcement officials if a patient attempts to abort a pregnancy resulting from the crime.

Senate Bill 463, by Sen. Blake Johnson, R-Corning, would add the reporting requirement to sections of the code dealing with exemptions allowing abortions in the case of rape or incest.

The bill also would add requirements to inspections of abortion clinics by the Health Department.

Karen Musick, the founder of the Arkansas Abortion Support Network, spoke against the bill, saying, “Women have been made to feel guilty for rape for too long.” The Senate Committee on Public Health, Welfare and Labor approved the bill Wednesday without any dissent. The bill now heads to the Senate floor.

A bill that would allow private clubs in dry counties to form entertainment districts where alcohol may be consumed in open containers fell short in the Arkansas Senate on Wednesday.

Twelve senators voted in favor and 19 were against House Bill 1228 by Rep. Lee Johnson, R-Greenwood. The measure fell six votes short of the 18 required for approval in the 35-member Senate. The Senate later expunged the vote to clear the way for another vote.

Sen. Jason Rapert, R-Conway, said the bill would open the door to people carrying alcohol around towns in dry counties.

The Senate sponsor, Sen. Breanne Davis, R-Russell-ville, said the bill wouldn’t necessarily expand access to alcohol and that it would only apply to private clubs that already have licenses to sell alcohol in dry counties.

Legislation that would allow a cause of action against commercial website operators that post incorrect or inaccurate background and criminal history information about a person won the approval of the state Senate on Wednesday.

The Senate’s 28-0 vote on Senate Bill 381 by Sen. Joyce Elliott, D-Little Rock, sent the measure to the House.

The commercial websites targeted by the bill would be for-profit websites that as part of their operations post background information on people.

The commercial websites covered by the bill would not include legitimate news-gathering organizations, publications or aggregators.

Elliott said the bill is a response to a problem in the state where a commercial entity conducts a background check on a person and posts that information, and oftentimes that information is incorrect and adversely affects the person’s employment.

The bill would allow people to ask the commercial entity to remove and correct information. If that correction is not made within five days, then there would be a cause of action in civil court and the entity could be fined $10,000 a day after the initial five-day period, she said.

A bill to allow medical practitioners, hospitals and insurance providers to decline services that violate their “conscience” was sent back to the Senate on Wednesday ahead of a potential final vote.

The Senate Committee on Public Health, Welfare and Labor agreed to amendments placed on Senate Bill 289 in the House, after lawmakers in that chamber blocked the bill in committee.

The amendments narrowed the definition of the word “conscience” to exclude philosophical definitions and added protocols for employers if their workers declined to participate in certain procedures under the bill.

The bill passed in the House earlier this week with the amendments, though it continued to face opposition from Democrats who said it would allow doctors and health care workers to discriminate against lesbian, gay, bisexual and trans-gender people.

The Senate committee endorsed the bill without any dissent. It now heads to the full Senate, where a vote could send the bill to Gov. Asa Hutchinson. 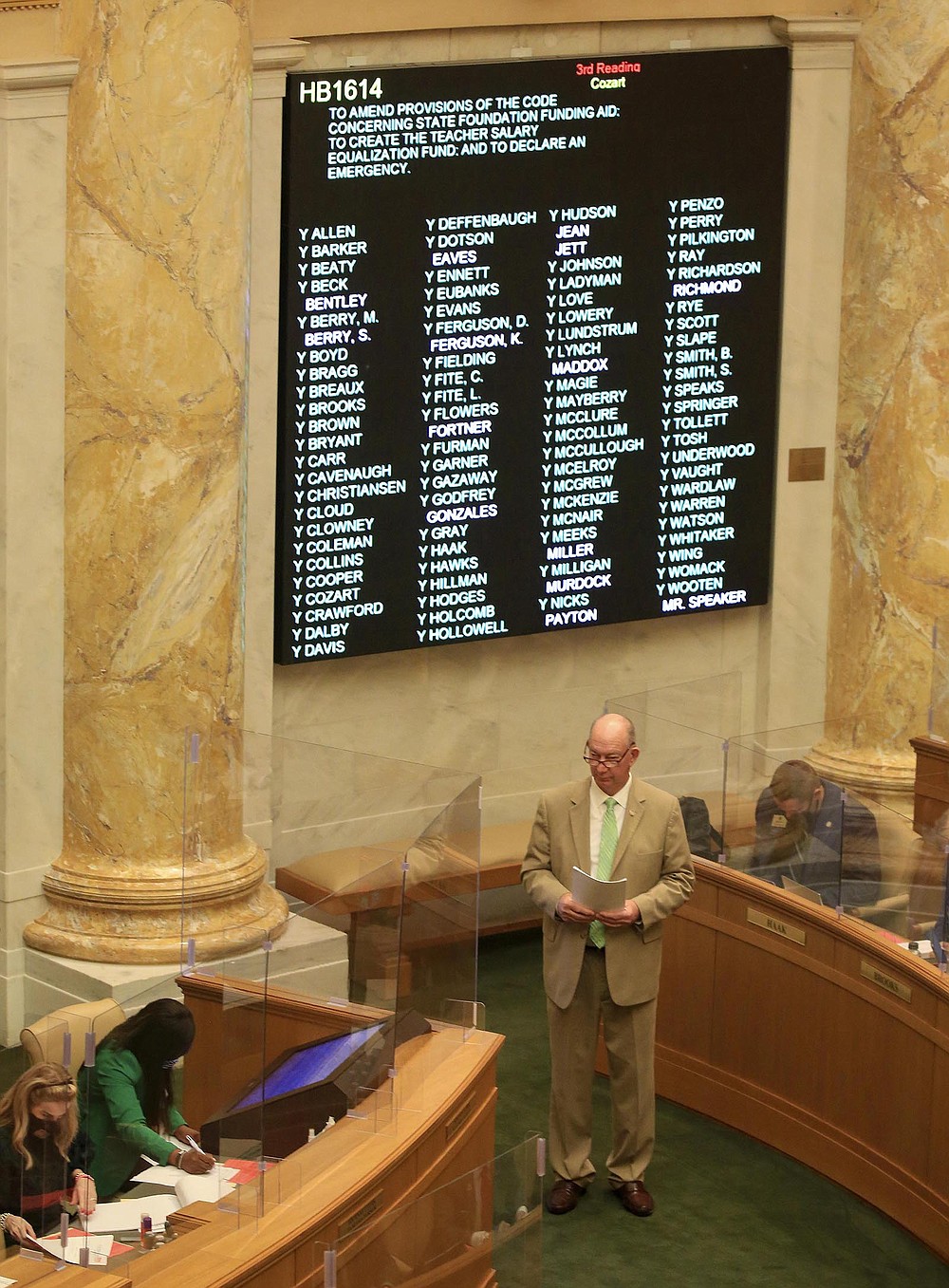 Rep. Bruce Cozart, R-Hot Springs, stands on the House floor Wednesday as he gets ready to present a bill on public school funding. Cozart, whose bill would help raise the average salary of teachers by $2,000, didn’t vote on the bill by Rep. Ken Bragg, R-Sheridan, to fund private school tuition for qualifying students. Cozart’s bill was approved in the House. (Arkansas Democrat-Gazette/Staton Breidenthal)
ADVERTISEMENT