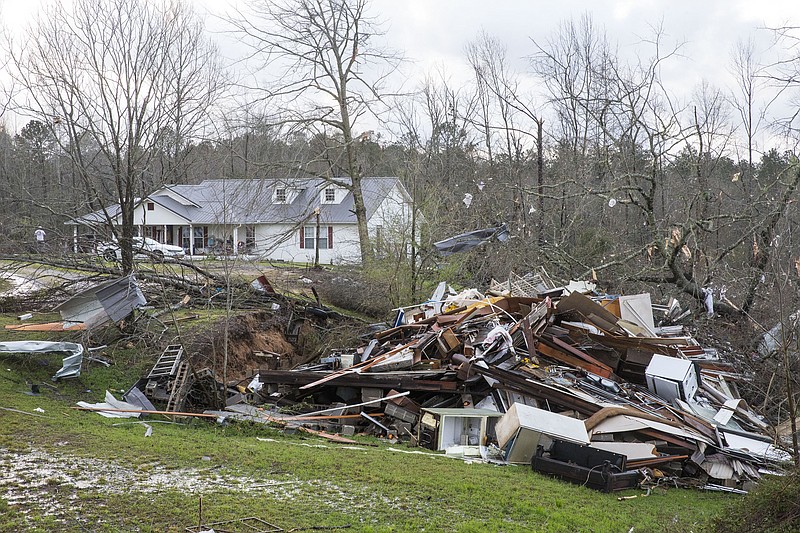 Debris litters weather-damaged properties at the intersection of County Road 24 and 37 in Clanton, Ala., the morning following a large outbreak of severe storms across the southeast, Thursday, March 18, 2021. (AP Photo/Vasha Hunt)

BIRMINGHAM, Ala. -- Storms that left splintered homes and broken trees across Alabama and Mississippi moved into Georgia and Florida on Thursday, rousing residents with early morning warnings as forecasters said the threat of dangerous weather would move up the south Atlantic seaboard.

About 20,000 homes and business were without power and the weather service said at least two people were hurt when an apparent tornado struck southwest Alabama, destroying a house. Pieces of homes and twisted metal laid amid broken trees in the hardest-hit areas, but no one died and the region appeared to escape the kind of horrific toll many feared after ominous predictions of monster twisters and huge hail.

"Overall, we have a lot to be grateful for, as it could have been much worse," Alabama Gov. Kay Ivey said in a statement.

The National Weather Service office in central Alabama said teams were fanning out Thursday to assess damage in at least 12 counties where tornadoes may have touched down.

Forecasters issued a string of tornado warnings around the region where Alabama, Georgia and Florida intersect, but there were no immediate reports of major damage. A line of storms stretched from the Gulf of Mexico to West Virginia, and the Storm Prediction Center said other, isolated severe storms were possible from southern Ohio into the central Appalachians.

"Significant tornadoes, wind damage and large hail will be possible from morning into afternoon," the center said. "Severe thunderstorms will also be possible from parts of the eastern Gulf Coast into the southern and central Appalachians."

The metro Atlanta area was pelted by heavy rain with intense lightning and strong wind gusts of up to 50 mph. Morehouse College tweeted that it was delaying the opening of its campus until 11 a.m. and that faculty and staff should not arrive until after that time. All classes before then were to be held virtually, it said.

In South Carolina, the severe weather threat led the state Senate president to caution senators to stay home Thursday while urging staff to work remotely for their safety. House Speaker Jay Lucas said that chamber would meet less than an hour Thursday to take up routine motions in advance of a budget debate next week -- then adjourn.

"If you are in a situation where it is perilous that you come, I'm asking you not to come," Lucas said. "If you can come, give us a quorum and do these few things we need to do, we will be out of here in a hurry."

Nearly all of South Carolina is under moderate risk of severe storms. The forecast led a number of the state's school systems to call off in-person classes Thursday and have students and teachers meet online.

On Wednesday, possible tornadoes in Alabama knocked down trees, toppled power lines and damaged homes. Some of the worst problems were in rural Clarke County, where authorities said two people were hurt when a home was destroyed and several others were damaged.

Between Montgomery and Birmingham in Chilton County, a storm destroyed at least three homes including that of resident Jimmy Baker.

"Then about a minute before it got here, we jumped ... in the hall closet, a little, small closet," Baker told WSFA-TV. "And just we heard it. You know, the sound from the house coming down. We were saved. We thank the Lord for that," he said.

In north Alabama, where forecasters said as much as 6 inches of rain fell, a woman who rescuers found clinging to a tree after her car was swamped by floodwaters in Morgan County was treated at a hospital, but details about her condition were not immediately available. Schools closed in neighboring Madison County because of flooding.

Roofs were yanked off homes in Moundville, south of Tuscaloosa. "There's a lot of trees down. I guess it had to be a tornado; it got out of here pretty fast," aid Michael Brown, whose family owns Moundville Ace Hardware and Building.

Additional damage was reported in Louisiana, Tennessee and Mississippi, where video showed an apparent tornado at Brookhaven. High winds blew down signs and trees in northeast Texas, and hailstones the size of baseballs were reported near the Alabama-Mississippi line, the weather service said.

More than 70,000 homes and businesses were without power at one point from Texas to Alabama, which was under a state of emergency, and communities across the South used social media to share the location of tornado shelters.