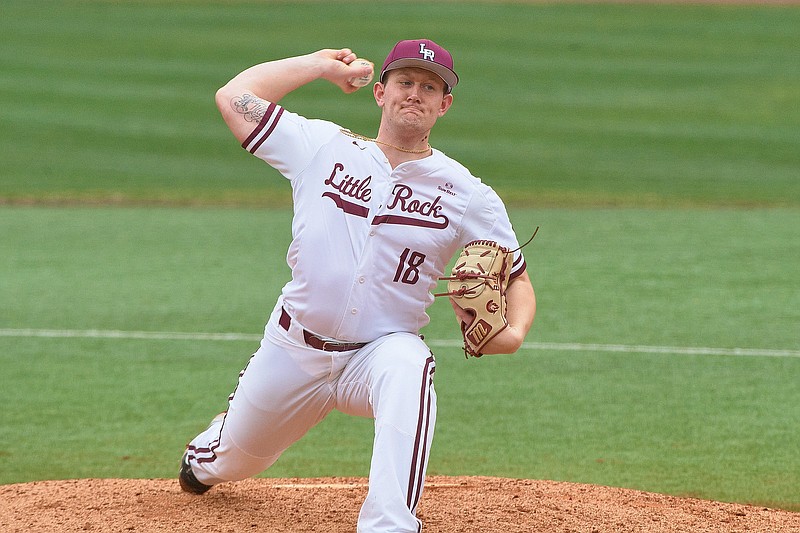 UALR right-hander Austin Barkley, a graduate transfer from Mississippi Valley State, has emerged as a quality utility pitcher for the Trojans. (Photo courtesy of UALR Athletics)

The University of Arkansas at Little Rock baseball team were primed to be swept at Auburn last weekend, when the Trojans dropped the first two games of their series at Plainsman Park and trailed the Tigers 4-1 through four innings on Sunday.

The tide turned in the fifth when senior Kenny Rodriguez tallied his first career hit with a grand slam that put the Trojans ahead 5-4, kicking off 11 unanswered runs that carried UALR to a 12-6 victory. Sophomore Tyler Williams drove in four runs, and graduate transfer Aaron Barkely tossed 4 2/3 innings in relief with the lead to send UALR into this weekend's Sun Belt Conference opener against Texas State with a win.

"I think it showed a lot of character and resilience and fight in our club," Coach Chris Curry said. "That gave us a lot of confidence going into conference play."

The Trojans (6-7) have played nine of their first 13 games on the road but host the preseason Sun Belt West Division-favorite Bobcats (8-10) at Gary Hogan Field to begin conference play today. Preseason Sun Belt Pitcher of the Year senior Aaron Funk will start for for the Trojans with first pitch set for 4 p.m., followed by a 4 p.m. start on Saturday and 1 p.m. first pitch in Sunday's finale. All three games will be streamed on ESPN-Plus.

Arkansas State University (3-9) also opens its Sun Belt slate this weekend, traveling to Boone N.C., to face Appalachian State (7-8), winners of three of its last five games. The three-game set against the Mountaineers will be broadcast on 95.3-FM in Jonesboro and streamed on ESPN-Plus. The Red Wolves won't play a home Sun Belt contest until a visit from the Trojans on April 1-3.

The experience of UALR's veteran pitching rotation featuring Funk, fellow senior Hayden Arnold and redshirt junior transfer Jack DeCooman has yet to pay off in 2021. Arnold's opening-day victory at Oral Roberts on Feb. 21 stands as the lone win for any of Curry's starting pitchers, and each starter enters the Sun Belt holding an ERA at or above 5.19. Against Texas State, the Trojans' starters will face a lineup that paces the Sun Belt with 116 runs scored, led by junior Justin Thompson's 21 RBI.

The Trojans have found steady arms in the bullpen, a group led by Barkely, a 6-1 right-hander who spent the last four seasons at Mississippi Valley State.

Barkley struck out 136 batters in 116 2/3 innings in 50 appearances as a both starter and reliever for the Delta Devils, and has emerged as a versatile weapon UALR over the first 13 games. He's allowed three earned run in 15.2 innings out the bullpen, and ranks in the Sun Belt with an ERA 1.72. Barkley notched his team-leading third win of the season at Auburn on Sunday, and has emerged as a crucial utility arm for UALR.

UALR senior second basemen Jorden Hussein sits second in the Sun Belt with a .429 batting average, and senior catcher John Michael Russ is not far behind at .404. The Trojans' lineup will be tested today by Bobcats' senior pitcher Zachary Leigh, who is 0-3 on the season but is fifth in the Sun Belt with 26 strikeouts.

The Red Wolves, meanwhile, began 2021 with seven consecutive losses but recovered recently with a two-game sweep of Missouri State and another win at Oklahoma.

"We've won some games and it's the beginning of what we feel like is some better play for us," Coach Tommy Raffo said. "We want to see continued improvement."

Junior Liam Hicks will miss his fifth game in a row with a hamstring injury he suffered at Missouri State on March 9. The Red Wolves' catcher leads ASU with a .370 batting average in eight games. Sophomore Jake Gish hit .500 in the series at Oklahoma and has joined redshirt senior Drew Tipton -- two home runs against the Sooners -- and senior Tyler Duncan in powering the Red Wolves in Hicks absence.

"We've had some guys in the lineup who were able to produce," Raffo said. "Sometimes an injury lets you find other capable players who can handle being in the lineup."

ASU's pitching staff was dealt a blow in February when projected No. 1 starter Jared Wilson was sidelined by an elbow injury, which he is expected to return from this season.

The team's pitching has struggled without Wilson, and ASU sports a 10.89 staff-ERA that ranks last in the Sun Belt. Senior Will Nash will open the series on the mound at Appalachian State today. The 5-11 right-hander has been the Red Wolves' most effective starter in 2021 and earned his first win of the season against Missouri State on March 9 when he allowed 2 runs and 4 hits over 5 innings pitched.