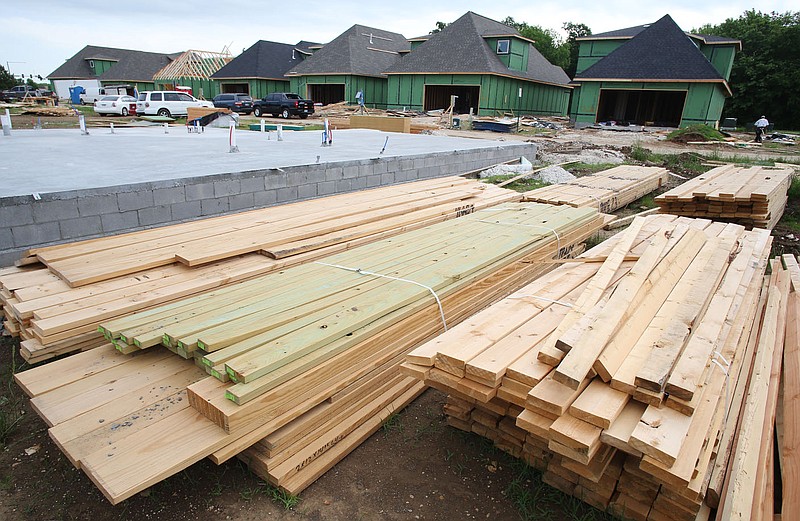 Construction continues on houses near the intersection of West Tuscan and North Malbec Roads in Fayetteville in this Wednesday, May 23, 2018, file photo. (NWA Democrat-Gazette/DAVID GOTTSCHALK)

An initiative the Northwest Arkansas Council announced Thursday hopes to make attainable housing in the region more than just an idea.

The council's workforce housing center will address housing affordability in Northwest Arkansas with backing from the Walton Family Foundation.

The center will collaborate with regional organizations, nonprofit groups, cities and developers to address housing needs and priorities in the region, according to a council news release. The goal is to create housing options and mixed-income neighborhoods for working-class families. Housing is intended to lie within close proximity to employment centers, amenities and services such as public transit and trails.

The 2019 Our Housing Future study from the foundation projects 80,000 households collectively will move to Fayetteville, Springdale, Rogers and Bentonville by 2040. The region needs to build about 2,900 units per year to keep up, but the four cities averaged 1,400 units annually from 2010 to 2016, according to the study.

The report recommends about half of the housing units must be appropriate for workforce households, defined as a family of four earning less than $78,000 a year.

"No community has done this as well as they had hoped. Any city that's growing as fast as we are faces these challenges," he said. "Even though housing prices have been climbing pretty significantly, we're still at a point where we could make a big difference."

The latest Arvest Bank Skyline Report published this month from the University of Arkansas Center for Business and Economic Research showed record home sales prices in Washington and Benton counties along with a low inventory of homes on the market.

Many Northwest Arkansas residents work in one of the four major cities but live in a smaller town farther away. Rogers Fire Chief Tom Jenkins said likely a quarter or less of the department's 140 firefighters live in the city.

Entry level salary for a firefighter in Rogers is $40,000. Average cost of a new home in the city is $341,407, according to the Center for Business and Economic Research.

"These public servants -- firefighters, law enforcement, teachers -- are critical to the fabric of the community, and the fact is a lot of them have to live outside of these areas if they want to see their dollar stretch as far as they want," Jenkins said.

No single organization has the ability to tackle an issue as complex as affordable housing, said Karen Minkel, Walton Family Foundation Home Region program director. The center will play a significant role in three goals: increasing the region's capability to combat housing challenges; engaging public and private organizations to come up with solutions; and testing new financial models to deliver a variety of housing types to families of mixed incomes, she said.

The center's work will involve several dimensions, Minkel said. She described "getting into the weeds" of solutions, using models from other cities nationally but also figuring out what will work in each city and across the region as a whole.

"We know greater density can often help drive affordability because it minimizes cost and it increases access to business and amenities," Minkel said. "That's a potential solution, but I think communities can approach this in a lot of different ways."

Not every strategy the center will take on will involve building new, dense development along major corridors. Partners for Better Housing, one of the partner organizations that will work with the center, has a financing model it uses for its Willow Bend project in south Fayetteville.

The model involves providing qualified homebuyers a $35,000 interest-free loan. It's an approach that could be used with homes being resold across Northwest Arkansas, said Tiffany Hudson, Partners for Better Housing executive director.

"There are so many avenues that this new entity can take on that will explore national best practices," she said.

Other partners include the Arkansas Coalition of Marshallese, Community Development Corporation of Bentonville/Bella Vista and Excellerate Foundation.

The first step will be finding an executive director for the center. The council has hired a firm to search nationally, Peacock said. The hope is to have someone selected this summer who will move to the area and get to work by fall, he said.

Community involvement will play a key role in the center's work, Peacock said. The concept is a no-brainer, he said -- the region needs people to be able to live near where they work.

Making an idea happen on the ground will involve intricacies, and some proposed projects may generate pushback, Peacock said. The trick is to design projects that enhance a neighborhood, he said.

"We want to create dynamic communities," Peacock said. "We want them to be built the smart way, where everyone can have an opportunity for home ownership and not have to commute an hour and a half like in a lot of big cities."