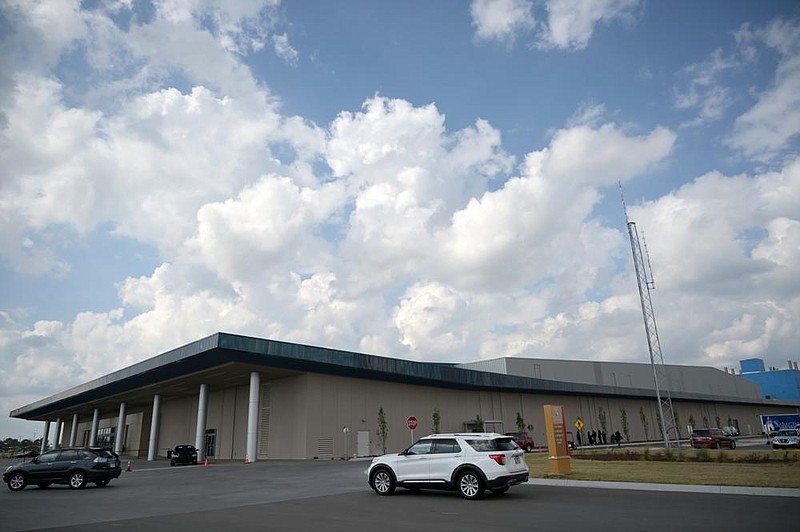 A suspect in the March 11 shootout at Saracen Casino Resort has surrendered, according to a prosecutor, and another is still behind bars following an initial court appearance on Wednesday.

Will Jones, Jefferson County chief deputy prosecuting attorney, said Thursday evening he received a phone call from the Pine Bluff Police Department saying that Tirek Trevon Langel, 22, reported to authorities and was being booked into the Jefferson County jail. Police had said Langel contacted detectives Monday through his attorney and informed them he would turn himself in by Wednesday.

Prosecutors filed formal charges against Langel. The attorney for Langel is not listed in court documents.

Pine Bluff Police have not confirmed whether Langel did turn himself in. He was not listed in the online jail roster as of 7:30 p.m. Thursday.

Langel pleaded guilty to possession of a controlled substance in October 2020, and was sentenced to 60 months' probation. He served a 36-month jail sentence for terroristic threatening and was given concurrent 36- and 60-month probation terms for aggravated assault following a residential burglary in November 2016, when he was 18.

Langel is among five men who were suspected in a gunfire exchange the night of March 11 at the Pine Bluff casino. Pine Bluff Police announced earlier this week three of the suspects, Dontarius Slater, Joshua McAfee and Kuro'n Brown, went to the detective office the next day and gave statements about the incident. Police said evidence and witness statements corroborated their statements that they did not shoot, and all three were released.

The other suspect, Brandon Ray Burnett, surrendered to detectives Monday and was booked into the Jefferson County jail. Burnett faces five counts of unlawful discharge of a firearm in a vehicle and three counts of aggravated assault.

He appeared before District Court Judge Kim Bridgforth on Wednesday, and his bail has been set at $150,000 secured. He is set return to that court April 26, but Jones said it is possible a hearing in circuit court could be held before then.

Under conditions of the bond, Burnett is prohibited from possessing any dangerous weapons, indulging in intoxicating liquor or illegal drugs, and making contact with Saracen Casino.

Langel will face a $250,000 cash bond upon his arrest and first court appearance, along with the same conditions.

Police detective Corey Wilfong, who signed a probable cause affidavit against Langel, said he sent a be-on-the-lookout notification to a man who called about Langel's whereabouts Monday evening.

Wilfong said in the affidavit a man from Rockwall, Texas, called at 6:41 p.m. and told him that a Sammy Pryor was arrested Friday for felony eluding. The witness reportedly told Wilfong that Pryor had a passenger with him and the passenger identified himself as Antonio Woods. The informer reportedly said Pryor is still in the Fate city jail and added Pryor is saying the passenger was Tirek Langel.

Fate and Rockwall are located in Rockwall County, just northeast of Dallas.

Saracen security guard Dakota Goforth suffered a gunshot wound in the lower part of his abdomen the night of March 11, according to an affidavit against Langel. He and the other four suspects were escorted out of the casino for alleged inappropriate behavior, but according to Saracen Chief Marketing Officer Carlton Saffa, one of the suspects stepped out of a vehicle before leaving the parking lot and fired a shot toward security guards, who then returned fire.

Wilfong affirmed he noticed five 9-mm shell casings located on the entrance/exit road on the east side of the casino and 47 shell casings where the security guards were shooting.

Goforth reportedly told an officer he heard the other guards arguing with a male in the parking lot and stated when he went outside the male began shooting and "all the guards including him returned fire." Goforth told another detective the next day he assisted other security guards with escorting three men out and followed them outside, as two other men were at the cash-out table at the time and got into a black vehicle.

Goforth was released from Jefferson Regional Medical Center and was at home resting the day after the shooting, according to Saffa, who did not identify the guard at the time. No surgery was required, Saffa said.

Security guard Tim Waggoner reportedly told another detective he escorted five Black males out of the casino and also stated the male with blond dreads -- who was later identified as Langel -- said "he was going to get his gun and shoot the place up." Langel exited the vehicle and began shooting toward him, Waggoner told Wilfong in the affidavit. Waggoner reportedly added the vehicle then sped off as he was still returning fire.

Three other security guards, Dakota McKeown, Justin Holstead and Tommy Dunlap, also gave statements to police, according to the affidavit. McKeown alleged the male with blond dreads "continued to mouth towards the security guards" and that three males eventually left following a physical altercation with the guards. Holstead stated he was assisting other security guards with removing three Black males from the casino and said Goforth turned toward him and stated he was hit. Both McKeown and Holstead stated they returned fire.

Dunlap, who told police he was patroling the parking lot, said he followed three suspects to a black Nissan Maxima, adding the male with blond dreads exited the vehicle and began shooting. The vehicle then sped away.

Police say in reviewing security video they saw the man later identified as Langel exit the Maxima and begin shooting toward the security guards. The five suspects were identified using an ID scan the casino uses upon entrance.

No patrons were hurt in the incident.

In statements to police, according to the affidavit, McAfee and Brown said Langel lost his phone and left them to try and find it. McAfee reportedly said he noticed security was following Langel, Slater and Burnett and came back saying "they were tired of being around fake people." McAfee and Brown said they stayed together the whole time.

Langel, Slater and Burnett left their area a second time, McAfee and Brown reportedly stated, adding after they left "some minutes later," security came to McAfee and Brown and informed that their friends had been kicked out and were waiting for them. Those two reportedly witnessed Langel picking up a gun and pointing it and shooting toward security officers, adding Langel got back in the car as it was leaving. McAfee reportedly said Burnett was driving and pointed a gun out out the window and began firing at security officers while driving away. Brown told police he couldn't tell who from inside the vehicle returned fire.

Slater checked himself into Jefferson Regional at approximately 5:35 p.m. Mar. 12, the day after the shooting, and contacted police to turn himself in, according to the affidavit. He was checked out and released from the hospital.

Slater reportedly told police he and the other four suspects were having a good time until Langel became intoxicated and began harassing his baby's mother. He told police Langel became "very irate" with the security guards that were trying to calm him down and that Langel got into a physical altercation with the guards, who then escorted him out. Slater said the Maxima is his cousin Burnett's vehicle.

Slater then told police, according to the affidavit, Langel got a gray handgun and began shooting toward the guards and got back in the vehicle, and that Burnett fired at least two shots from the vehicle.

Police say Burnett's attorney, Kara Copeland, was present when Burnett was questioned Monday, adding she stated Copeland didn't wish for Burnett to give a statement but would cooperate in any other way. Burnett allegedly took detectives to where his car was located at their request and signed a consent to search his home at another address.

Officers discovered several bullet holes in the driver's side of the Maxima and the driver-side passenger window broken out.

"In plain view of the back seat, I located a black 9-mm handgun," Wilfong said in the affidavit. "The magazine inside the handgun was empty. A tow truck was called and the vehicle was towed to the crime scene bay. After the vehicle was towed from the house, I asked Mr. Burnett where he was taking us for the gun. Mr. Burnett stated that was his gun and he was not taking us to the house anymore."