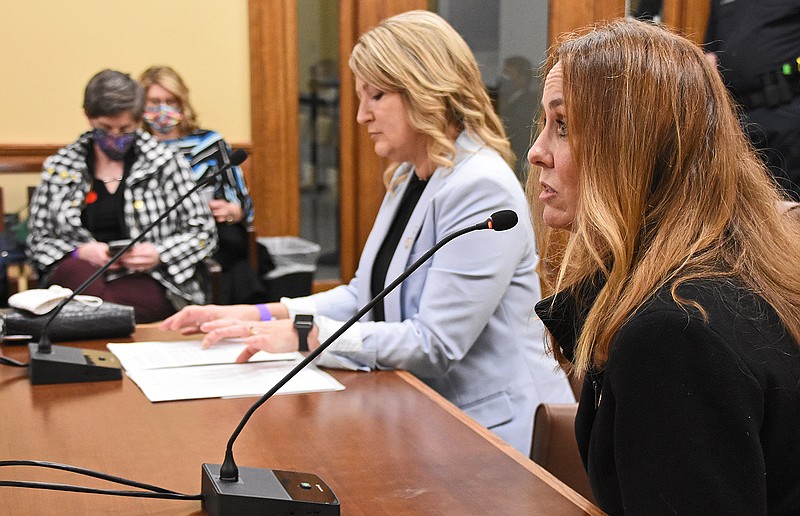 Sen. Missy Irvin (right) speaks about her bill Thursday in the House Education Committee. With Irvin is Rep. Sonia Barker, the bill’s sponsor in the House. More photos at arkansasonline.com/319committee/. (Arkansas Democrat-Gazette/Staci Vandagriff)

A bill that would deter schools from allowing transgender girls and women from participating on school sports teams corresponding with their gender identity was advanced by the House Education Committee in a split voice vote on Thursday.

Senate Bill 354 by Sen. Missy Irvin, R-Mountain View, would give a private cause of action to students "deprived of an athletic opportunity" or suffering "direct or indirect harm" as a result of a kindergarten-through-12th-grade school or higher-education institution not maintaining separate teams for female students to seek injunctive relief against the school, as well as monetary damages.

Supporters of the bill and of national efforts to prevent transgender athletes from participating in girls' and women's sports say athletes assigned the male gender at birth have physiological advantages over female competitors, while those opposing those efforts say they exclude transgender students.

"It significantly gives our girls and our young women in sports what they deserve, which is a level playing field in athletic competition and in athletic advancements and opportunities," House sponsor Sonia Barker, R-Smackover, told the committee.

Barker was joined by Ken Yang, director of governmental affairs for the Arkansas Family Council.

In response to a question from Rep. Fred Love, D-Little Rock, she said she did not know of any verified instances of transgender girls and women participating in school sports in Arkansas.

"Is the problem significant enough that we need this blanket ban, this arguably discriminatory ban against transgender girls participating?" Godfrey asked.

"Obviously I don't think that's sufficient or I wouldn't be running this bill, or that that's enough protection for our female athletes in their sports," Barker answered.

Asked by Godfrey why rules from the NCAA -- which allow transgender women to compete on women's college sports teams after one year of hormone-suppression treatment -- aren't sufficient, Barker said, "We didn't want partial protection."

The legislation would allow for transgender girls and women to play on male or co-ed sports teams.

Two people signed up to speak against the bill Thursday: Dr. Janet Cathey, a co-founder and former faculty member at the Gender Clinic at the University of Arkansas for Medical Sciences, and Lance LeVar, who expressed his personal opposition.

"The science does not support what is happening, and I would encourage you, if you have not spent time talking to our transgender youth and young adults, that you may be caught in the circle of bullying," LeVar said.

Speaking to the committee in support of her bill, Irvin said she had heard from a friend about a transgender woman who had reassignment surgery later in life who supports the bill.

"She, as a transgender adult, fully and completely supports the bill and thanked me for doing this because there is a clear distinction," Irvin said.

SB354 is headed to the House, likely the final hurdle before being sent to the governor.

Through a spokeswoman on Thursday, Gov. Asa Hutchinson said he is "supportive of the objective of the bill but will continue to review the specific language before announcing his position."

More than 20 states have introduced bills to prevent transgender students from competing on girls and women's sports teams, according to The Associated Press.

Mississippi became the first state this year to sign one into law earlier this month, and South Dakota has sent its bill to the governor.

Idaho was the first state to enact such a law, but the 2020 measure is blocked by a court ruling.

A number of national health, education and child-welfare organizations, including the American Academy of Pediatrics, the National PTA and the National Education Association, have called on lawmakers to oppose bills like SB354.

"Transgender youth are already at a heightened risk for violence, bullying and harassment," an open letter from the groups reads. "These bills exacerbate those risks by creating an unwelcoming and hostile environment in places where students should feel the safest and most supported."

More than 500 college athletes have signed a letter asking the NCAA board of governors to refuse to schedule championships in states that have banned transgender participation in sports. 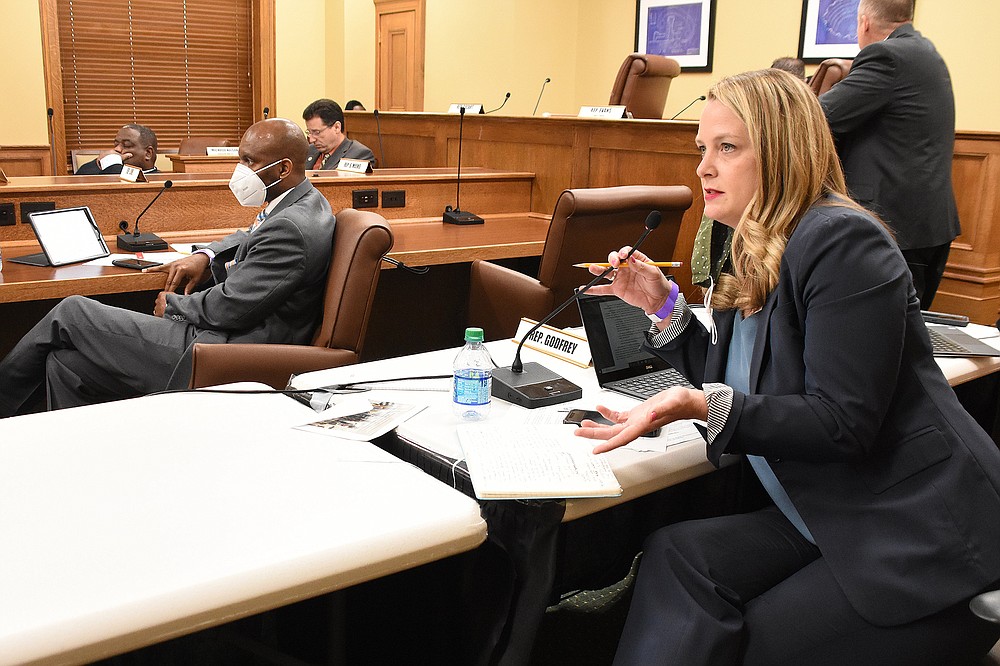