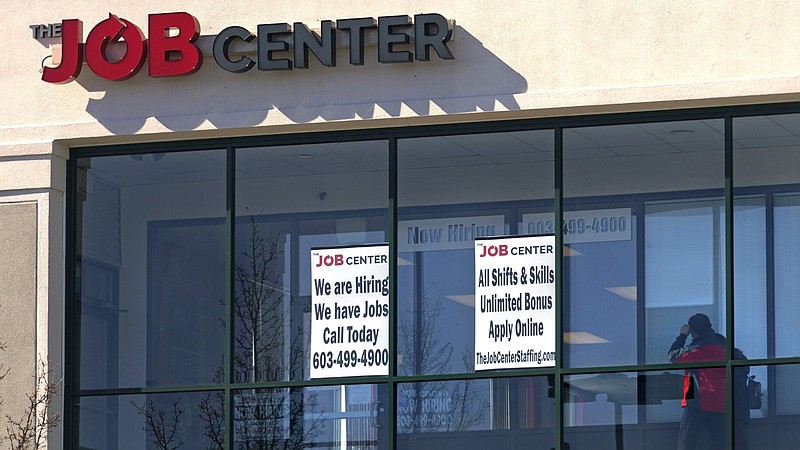 Applications for U.S. jobless benefits unexpectedly rose last week to the highest since mid-February, underscoring how the labor market is recovering in fits and starts.

Initial claims in regular state programs rose by 45,000 to 770,000 in the week ended Saturday, Labor Department data showed Thursday. Continuing claims -- an approximation of the number of people filing for ongoing state benefits -- fell for the ninth week to 4.12 million in the week ended March 6.

The four-week average of claims, which smooths out weekly variations, dropped to 746,000, the lowest since late November.

A total of 4.1 million people are continuing to collect traditional state unemployment benefits, down 18,000 from the previous week. Including separate federal programs that are intended to help workers displaced by the health crisis, 18.2 million Americans were receiving some form of jobless aid in the week of Feb. 27, down by 1.9 million from the week before.

The continuing layoffs are occurring even as the overall job market has shown solid improvement. Last month, U.S. employers added a robust 379,000 jobs, the most since October and a sign that the economy is strengthening as consumers spend more and states and cities ease business restrictions.

With vaccinations accelerating, hopes are rising that Americans will increasingly travel, shop, eat out and spend freely after a year of virus-induced restraint.

A rebound can't come too soon for the rising share of job-seekers who are classified as long-term unemployed. As of late February, millions of people were enrolled in federal extended-benefit programs that cover people who have exhausted their regular benefits, which last for six months in most states. The aid package signed by President Joe Biden last week ensures that those programs will continue until fall, but benefits alone won't prevent the damage that prolonged joblessness can do to workers' careers and mental and physical health.

"The recovery needs to be on the scale of being a once-in-a-generation economic upswing to really pull those people back into the labor market," said AnnElizabeth Konkel, an economist for the career site Indeed.

Biden's $1.9 trillion relief package is expected to help accelerate growth, especially with most adults this week receiving $1,400 stimulus checks that should fuel more spending. An extension of $300 weekly unemployment benefits into early September will provide support, too, along with money for vaccines and treatments, school re-openings, state and local governments and ailing industries ranging from airlines to concert halls.

No single factor fully explains the still-high level of weekly applications for state unemployment aid. The figures have been clouded by backlogs in processing and by evidence of fraud at the state level. In addition, the expansion of supplemental federal unemployment benefits has probably encouraged more jobless Americans to apply for aid.

The nation is still roughly 9.5 million short of the number of jobs it had in February 2020. And Federal Reserve Chairman Jerome Powell suggested Wednesday after the Fed's latest policy meeting that the overall economic outlook remained cloudy.

"The state of the economy in two or three years is highly uncertain," Powell said at a news conference after the Fed signaled that it expects to keep its key interest rate near zero through 2023 despite some solid economic gains and concerns about rising inflation pressures.

By most barometers, business activity in the economy's vast and hard-hit service sector is still far from normal. The data firm Womply said, for example, that as of early last week 63% of movie theaters, galleries and other entertainment venues were closed. So were 39% of bars, 32% of gyms and other sports and recreation businesses, and 30% of restaurants.

Information for this article was contributed by Julia Fanzeres and Olivia Rockeman of Bloomberg News (TNS), by Paul Wiseman of The Associated Press and by Ben Casselman of The New York Times.