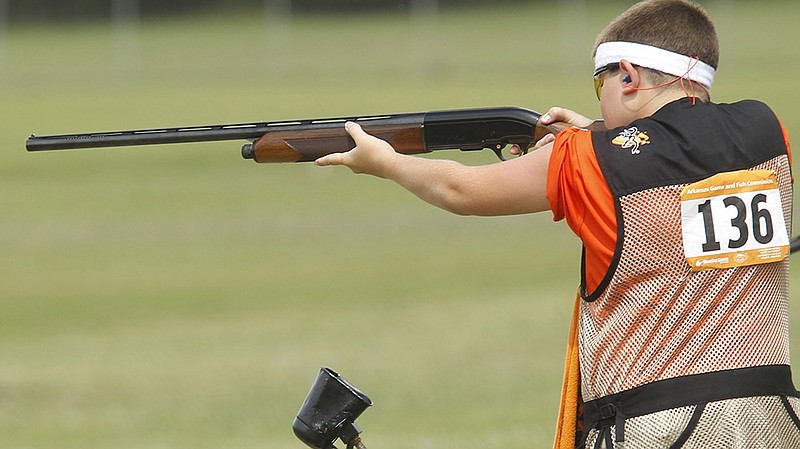 A file photo shows a participant in junior finals at Lonoke. The Arkansas Youth Shooting Sports Program can hold live tournaments in 2021. (Special to The Commercial)

With so many events being staged "virtually" these days because of precautions centering on the spread of coronavirus, the Arkansas Youth Shooting Sports Program and its coordinator, Jimmy Self, were recently given some good news: live tournaments are back on.

"Yeah, we're going to have a season," said Self, who runs the Arkansas Game and Fish Commission trap-shooting program out of the agency's Jacksonville office. "We don't know that many details, what will be allowed with the mandates and all that stuff shaking out. We'll just see how it goes. We have more than a month and a half before we start the regionals. We have a plan. We're just hoping things continue to ease up."

Regionals for the four quadrants of the states and the state tournament will be held at the Arkansas Game and Fish Foundation Shooting Sports Complex at 2800 Graham Road at Jacksonville.

The setup for shooting sports, Self said, easily falls in line for social distancing. Shooters are at least 9 feet apart at their shooting stations, and they can shoot without wearing their masks. The plan will be to be masked on their way to the shooting stations and after leaving them, if current mask protocols are still in effect for the tournaments.

The remaining question is whether fans will be able to attend -- if protocols will allow for a parent, both parents, other family and fans.

Self said the shooting stations are 50-75 feet from the spectating areas. In a "regular" year the regionals on five consecutive Fridays and Saturdays late in the school year have drawn hundreds of people daily along with the competitors, and various vendors have set up around the complex.

Some programs have been noted for the tailgate-like atmosphere of parents and supporters in the parking area. It's been quite a show, one that was missed completely last spring when the shooting tournament was canceled along with so many other school-related events due to the covid-19 outbreak.

And that's still where the "wait and see" is for Self, he said. But the regionals for four areas of the state and the state championship round, he said, are set to go at Jacksonville. The program has already dispersed this spring's supplies to teams; all schools competing had a March 1 deadline to submit regional entry forms.

"Everybody in the program already knows what's going on," he said. "The Arkansas Department of Health gave us a permit over a month ago. Some of our [Game and Fish] upper administration told us a week or so ago that they approved. So, we're good to go. My biggest thing is, we have to go by the guidelines set by the health department and the governor's guidelines. But we're going to have an in-person tournament for four regionals and a state at Jacksonville."

Also, the Arkansas Youth Shooting Sports Program and the Arkansas Game and Fish Foundation (which helped fund the Jacksonville range) are putting on a shooting sports tournament April 10. The eighth annual tournament, a fundraising event for the program and led by the Homebuilders Association of Greater Little Rock, will be a first-come, first-served event for youth teams beginning at 9 a.m., and includes a shoot-off for adults that afternoon.

The foundation is raising money from sponsorships to cover some teams, Self said; once past that number of sponsored teams, other teams can compete for $250 per squad.

The grand champion trap shooter in the April 10 event will win a Game and Fish Commission lifetime hunting and fishing license. Prize money, to be used toward purchase of ammunition for the team, will be awarded to the top three teams in increments of $700, $500 and $300. All program teams are eligible to enter.

To donate for the sponsorship of teams in the event, or for more information, email Tyler Lawrence of the foundation at tyler@agff.org. Teams wishing to compete should email Self at james.self@agfc.ar.gov or call the foundation at (501) 223-6468.

Part of the money raised helps provide an annual scholarship of $1,250 to the Champion of Champions shooter each year. Shooters in the senior division who hit all 50 targets during their regional shooting tournament advance to a shoot-off during the state tournament.

Any other youth shooters or programs wanting to participate in the program are encouraged to sign up for the next school year. Spring tournament registration will open in January.

"We want to get new teams started and more kids involved for next year," Self said. "If your school or community doesn't have a shooting team, we would like to get one started in your area."