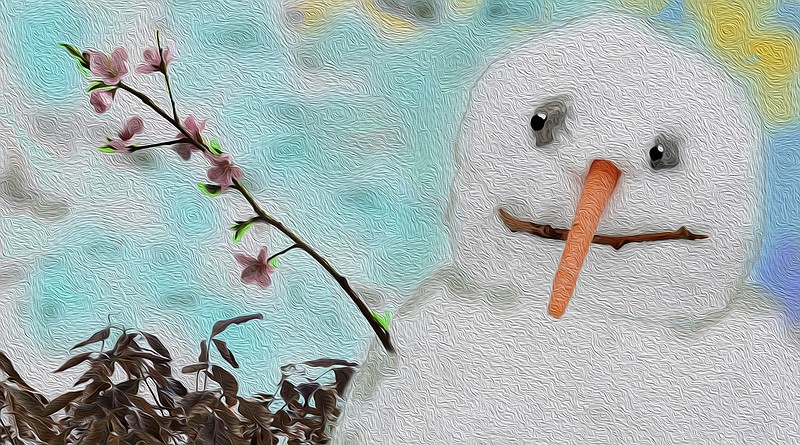 Gardeners are continuing to agonize over their cold-damaged plants. Some just can't seem to overlook the brown leaves and are ready to rip up their entire yards, but that is not a good idea.

While there will be plants that need to be pruned, and possibly replaced, patience is recommended. The recent two weeks of sunshine and higher temperatures have some plants waking up — but it's still too early for others — and we might not have as much damage as it appears.

Although we have brown plants in the garden, we are seeing plenty of new green leaves and even flowers. The pink and purple tulip magnolias (saucer magnolia) are really putting on a show, and the yellow blooms of forsythia, coupled with white spirea and pink-flowering quince are adding to the color palette.

Camellias are bouncing back and they have plenty of pink, white and red blooms — alongside some frozen buds.

Spring-flowering bulbs were undeterred (except for those that had open flowers when the February snowstorms descended) and are a welcome spot of color.

Spring-flowering plants are always pruned after they flower. We aren't sure what will flower and what won't this year, but let's give them a chance to flower before pruning.

Azalea damage is dependent on variety and location. Some azaleas are covered in brown leaves, while some have some burned foliage; and others seem to be fine. Flower buds are still firm on many azaleas, and I predict we will see blooms, albeit a slightly reduced display.

Allow all plants that bloom in the spring to have a chance at flowering, and then prune as needed. Pruning now or a month from now is not going to make a difference in the future health of the plant.

Plants that bloom in the summer should be pruned now.

Roses are leafing out, and if you haven't pruned them, now is the time to do so.

Summer-flowering plants (with a few exceptions) bloom on their new growth and are always pruned either before new growth begins or slightly after it does. New growth is beginning.

Normally evergreen abelia, nandina and sweet olive all had brown, dead leaves after the cold, but they have shed the dead foliage completely and the bare branches are beginning to put on tiny new leaves. If they needed pruning before the winter storm, then now is a great time to prune — as new growth is beginning.

Abelia and nandina plants have multiple canes or stems that sprout from the soil line, and the canes grow woody and unproductive after a season. Thinning out the older canes by cutting at the soil line will help with rejuvenation. Removing up to a third of the stems will give you growth from the ground up. A light top shearing is fine as well.

Abelia blooms on the new growth, so pruning is not going to reduce flowering.

Now is also a good time to prune buddleia (butterfly bush) and summer-flowering spirea in the same way — and not because of winter damage, but because it is the season to do so.

Gardenias and big leaf hydrangeas are two plants that bloom in the summer, but set flower buds in the fall before going dormant. Everyone has been quite concerned about both plants. While gardenias are still a big unknown, surprisingly, big leaf hydrangeas are budding out all over Central Arkansas. This is a bit of a shocker, since they frequently get nipped in a slightly colder winter, and February was much colder than normal. But miracles do happen!

As for the gardenias, don't prune until you see where new growth begins. Some may have to be pruned to the soil line, but we hope not.

Loropetalum have become a staple in our landscapes the past 10 years or so. In the northern tier of counties, gardeners stopped planting them several years ago because of winter damage. That was not a concern in the rest of the state until this year. Surprisingly, the dwarf varieties came through the snowstorms with flying colors because the snow insulated them. Normally, they are the least hardy.

The loropetalum varieties with green foliage and white flowers have very little damage, while many of the purple-foliaged forms may have died back severely. For sure, all of the foliage is dead. In some cases, the dead leaves are beginning to shed and we might start to see some leafing out; but so far, there have been no signs of new life.

Leaf shedding is preferable to dead leaves remaining attached to the stems, because attached leaves can indicate the death of that stem.

Figs are in a similar category. I have seen sprouting on some branches that were under the snow line, but nothing from above. I predict we will not have much fig production this year — but time will tell.

Plants that you simply grow as evergreens for their green foliage can be pruned now. If there is a little tip burn on boxwoods, prune it off now. Wax leaf ligustrums took quite a hit with the cold, so a little pruning on them is fine, since we aren't risking blooms.

If you have non-flowering evergreens that need severe pruning, this is the time to prune them so they have time to recover before summer sets in. Again, this is not storm recovery, but the normal recommendation we make every year for proper pruning practices.

Once our gardens are up and growing, give them a little extra TLC. Water when dry and apply a light application of fertilizer.

Assess the need for replacement of severely damaged plants. If the plant is the focal point of the landscape and died back by one-half or more, do you have time to let it recover on its own, or do you need to replace it? Consider that nurseries had a banner season last year, and it looks like 2021 will be another grand year, but plant producers might have had some winter damage too, so we have to be patient and see what is available.

If you do have time to let plants regrow, consider using larger flowering tropical plants or even large houseplants as fillers for the season. There are some great options that can fill in holes until your plants have a chance to regrow.

If you are replacing plants, do some shopping and see what is out there. Many gardeners have been pushing the limits of cold hardiness and using things that were only marginally hardy. They are paying the price now.

Some gardeners have asked if February's storms were one-time freaks or could happen again, and the answer is anybody's guess.

So, try something new, but don't plant your entire garden in it. See how it fares. Diversity is a good thing.

If you think back to the early and mid-1980s we had several years of back-to-back cold. Gardenias froze to the ground almost every other year, and we called fig trees "fig bushes" because they froze back so often. The weather has been warmer in the past 10 years or so, and we aren't used to this type of damage anymore. Hopefully it was just a season, not a new normal.

We can bounce back from winter, and gardens are doing that — just a bit slower than normal.