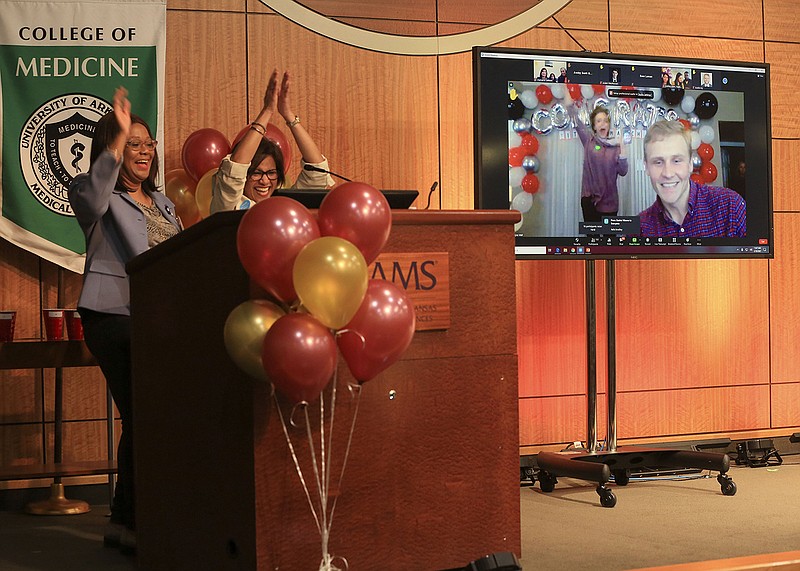 Bryce Wall announces his residency match virtually Friday as Sharanda Williams (left), assistant dean for student affairs for the College of Medicine at the University of Arkansas for Medical Sciences, and Dr. Sara Tariq, associate dean for student affairs for the UAMS College of Medicine, applaud during the annual Match Day ceremony at UAMS in Little Rock. Wall matched as an orthopedic surgery resident at UAMS. More photos at arkansasonline.com/320match/. (Arkansas Democrat-Gazette/Staton Breidenthal)

During a normal year, students spend the last couple of semesters in medical school applying for residencies, visiting hospitals, meeting potential colleagues and conducting away rotations at the medical facilities where they might work after graduation.

The past 12 months haven't been normal.

On Friday, three medical schools in Arkansas celebrated the annual Match Day, a nationwide announcement during which soon-to-be doctors learn where they will spend the next few years honing their skills as physicians.

It's a much-anticipated, anxiety-ridden moment for students.

Because of the pandemic, the medical students graduating this spring were not able to travel, which meant the entire application process was conducted virtually, usually in hourlong Zoom meetings with interviewers across the state, if not across the country.

"This is why so many of us lost sleep this year, and especially this month," said Dr. Sara Tariq, associate dean of student affairs at the University of Arkansas for Medical Sciences College of Medicine. "With the pandemic, so many things changed, mainly for our seniors."

This was the second year UAMS held the celebration virtually.

In 2020, the Match Day ceremony occurred about a week after the nation went on lockdown because of the coronavirus.

This year, members of the UAMS College of Medicine Class of 2021 appeared by video, many with family members, spouses, even pets, present to celebrate news of their residencies. In the backgrounds, there were balloons, champagne, confetti, screams, hugs and some tears as the students revealed their matches.

"Honestly, I was really worried," Tariq said. "I did not know how many students would be challenged with trying to find a position in the Match. Our seniors did a phenomenal job. Phenomenal."

Out of 169 students in this year's graduating medical school class at UAMS, all were placed, with 87 receiving residency positions in Arkansas and 82 receiving out-of-state residencies in 32 states.

Nationally, 48,700 applicants registered for the 2021 Main Residency Match Program, an all-time high, according to the National Resident Matching Program, the organization that pairs hospitals with graduating students. Those applicants were vying for 35,194 first-year residency positions.

UAMS senior Jace Bradshaw, originally from Arkadelphia, learned he would be moving to Baltimore where he will begin a residency at Johns Hopkins Hospital to take part in a program that combines emergency medicine and anesthesiology.

Bradshaw said he was one of two medical students nationally to land a spot for the combined program.

"To end up there is just a dream come true for me," Bradshaw said. "The fact that they chose me, I am really honored."

Interviews with Hopkins were conducted on Zoom, Bradshaw said, adding that current residents at the hospital used online tools, like Google Maps, to explain different neighborhoods in Baltimore to illustrate what life would be like there.

"A lot of programs did a similarly good job of getting us plugged in with people," he said. "They really tried to give us broadly a good picture at each of these different places."

Bradshaw's classmate, Ryan MacLeod from Little Rock, will be moving to Connecticut where he will be a resident at the Yale New Haven Hospital. He will join an internal medicine physician scientist program focused on patient care combined with research.

"Every interview was a worry if there were storms coming through, what might happen with the Zoom call, but we had backup plans," he said. "Each program understood it wasn't the applicant's fault if the internet goes out for some reason."

In Jonesboro, 102 out of 109 seniors at the New York Institute of Technology College of Osteopathic Medicine at Arkansas State University were matched.

Many of those students will move on to residencies in the Mississippi Delta region – a keystone of NYITCOM at ASU is to increase the number of physicians in rural, more socioeconomically challenged communities.

"These were seniors in medical school who are going through and finalizing school in the middle of one of the largest health care crises in modern history," Dr. Shane Speights, NYITCOM at ASU dean, said. "It will shape how they practice medicine, and certainly it is molding how they will be as young physicians."

NYITCOM senior Ben Theisen, who's originally from a small town in Michigan and graduated from Harding University in Searcy, received news he'd be moving to Little Rock for a residency in pediatrics at Arkansas Children's Hospital.

His family from Michigan and his wife's family from Louisiana traveled to Jonesboro for Friday's announcement.

Theisen said applying for residencies during the pandemic has been "interesting."

"Just trying to figure out all of this doing virtual interviews," Theisen said. "The stress of not being able to go and see some of these places."

"It's been an adventure," he said. "I'm really excited to stay here in Arkansas and just can't wait to get going and to learn more."

Ninety-five percent of the 140 students were matched.

Students and family members gathered Friday morning at the Fort Smith Convention Center for a socially distanced ceremony where they received a sealed envelope with their residency location.

Balloons dropped as students opened them.

Over 50% of the class matched in a residency in Arkansas, Dr. Rance McClain, the college's dean said in a news release. 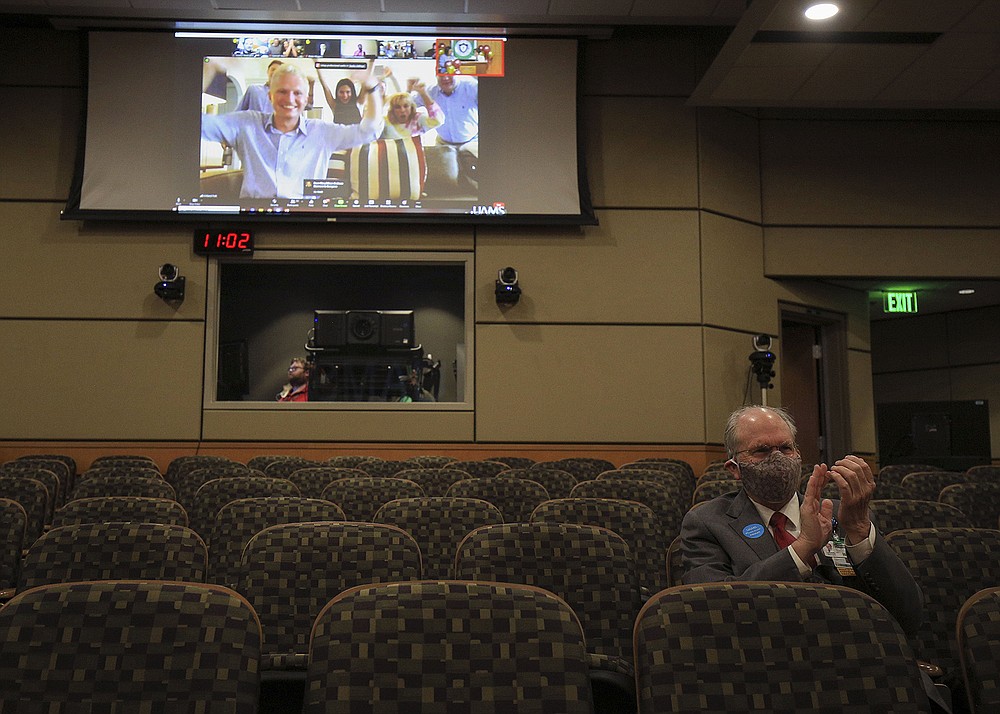 Dr. Christopher Westfall, dean of the College of Medicine at the University of Arkansas for Medical Sciences, applauds as Kirkland Polk (on screen in background) announces his residency match virtually Friday during the annual Match Day. Polk matched as a psychiatry resident at St. Louis University. More photos at arkansasonline.com/320match/. (Arkansas Democrat-Gazette/Staton Breidenthal)
ADVERTISEMENT