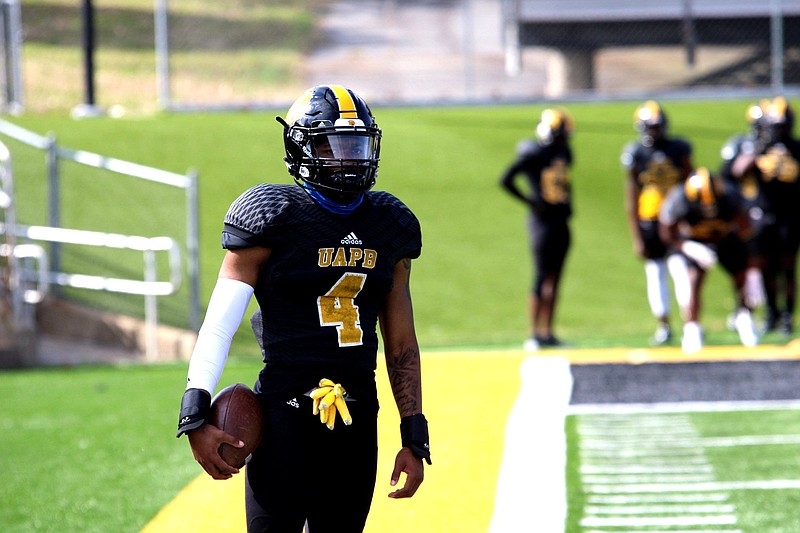 For Grambling State to start a football season 0-2 may be alarming to its fan base. Yet, one statistic in the Tigers' favor has haunted the University of Arkansas at Pine Bluff.

Kickoff today is set for noon at Eddie G. Robinson Stadium in Grambling.

"We don't need to do too much different," said senior defensive back Shawn Steele, who had one of three UAPB interceptions two weeks ago at Southern University. "We've got to play all four quarters strong. We've got to finish. Really, that's it."

Finishing is a point of emphasis for the Lions, who avoided blowing a 33-14 lead against Southern to escape Baton Rouge with a 33-30 win.

The Lions, who had last week off, will not only rely on an offense that ranks second in the Southwestern Athletic Conference in both total yards (411) and points (33) per game only to Jackson State, but also its ability to create turnovers. UAPB intercepted Southern three times and recovered a Jaguars' fumble.

"I feel that we have the best defensive backs in the league right now," senior linebacker Kolby Watts said. "Anytime the ball is thrown, it should be danger, in my opinion, for the opposing team's quarterback."

UAPB, which held Southern to 3.9 yards per carry, is facing a Grambling State run game that's only produced 3.2 through two games.

"I don't think we put in anything different," senior linebacker Kolby Watts said. "I feel like we want to approach every game at stopping the run because when you can make one team one-dimensional, it makes it easier for us as a defense."

Grambling State has developed a penchant for forcing turnovers as well, scooping up four fumbles and picking off a pass this spring.

"Our defense knows we only need to be able to beat somebody 2-0," Lions Coach Doc Gamble said. "I'm really relying on those guys to get something done. Nowadays, with the high-explosion offenses, those slow-point games don't seem like what they used to be in the past, but still, at the end of the day, they got it done. ... If we've shown we can do it one time, we expect to do it all the time, then."

The Tigers have won 15 Black college national championships and 26 conference titles (one vacated in 1975), the most recent coming in 2017 under Broderick Fobbs, now in his fifth season as head coach. They had won 16 straight home games until a 33-28 loss to Deion Sanders-coached Jackson State in which the home Tigers fumbled the ball at the visiting Tigers' 1.

Much like UAPB's recent history with Grambling, Fobbs' Tigers have been woefully short this season, given also last Saturday's 17-10 loss to Prairie View A&M in Arlington, Texas. Mark Orlando stepped down as Grambling State's offensive coordinator after the game, and Fobbs will share offensive play-calling duties with quarterbacks coach Kendrick Nord.

"You've still got to plan," Gamble said. "They've got players. They've got very good players. It'll be a wrinkle here and there. It's not like they're coming off a bye-week where it's going to be a whole lot of changes to what they do, offensively, but there'll be some."

Geremy Hickbottom has completed 35 of 51 passes for 350 yards and a touchdown with two interceptions this season for the Tigers. He also rushed for a touchdown. His favorite target has been Darrell Clark (14 receptions, 166 yards, one touchdown). C.J. Russell and Lyndemian Brooks have been splitting carries.

The Lions' first home game is scheduled for 7 p.m. March 27 against Alabama State, and up 3,000 fans will be allowed in Simmons Bank Arena following a two-month, campus-wide moratorium on home sporting event attendance as a precaution against covid-19.

Tickets may be purchased in advance only through uapblionsroar.com/tickets through midnight Friday before each home game. Prices are $20 for general admission tickets, $25 for reserved bleacher seats, $30 for reserved bench back seats and $40 for chairback seats. UAPB students are admitted free with a valid student ID.

What: SWAC game vs. Grambling

NOTE: Records do not reflect Alcorn State’s forfeits due to covid-19 issues