Must stop Democrats’ push, he says by NICHOLAS RICCARDI AND MICHAEL BIESECKER THE ASSOCIATED PRESS | March 21, 2021 at 4:54 a.m. 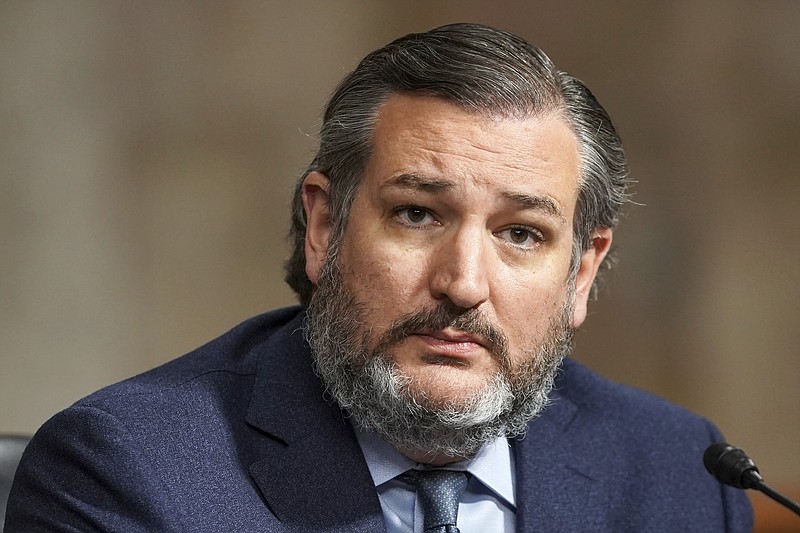 Sen. Ted Cruz, R-Texas, speaks during a Senate Committee on Homeland Security and Governmental Affairs and Senate Committee on Rules and Administration joint hearing Wednesday, March 3, 2021, examining the January 6, attack on the U.S. Capitol in Washington. (Greg Nash/Pool via AP)

In an invitation-only call this month, Sen. Ted Cruz huddled with Republican state lawmakers to call them to battle on the issue of voting rights.

Democrats are trying to expand voting rights to "illegal aliens" and "child molesters," he claimed, and Republicans must do all they can to stop them. If Democrats push through far-reaching election legislation now before the Senate, the GOP won't win elections again for generations, he said.

Asked if there was room to compromise, Cruz was blunt: "No."

"H.R. 1's only objective is to ensure that Democrats can never again lose another election, that they will win and maintain control of the House of Representatives and the Senate and of the state legislatures for the next century," Cruz said told the group organized by the American Legislative Exchange Council, a corporate-backed, conservative group that provides model legislation to state legislators.

Cruz's statements, recorded by a person on the call and obtained by The Associated Press, capture the building intensity behind Republicans' nationwide campaign to restrict access to the ballot.

From statehouses to Washington, the fight over who can vote and how -- often cast as "voting integrity" -- has galvanized a Republican Party in search of a unifying mission in the post-Trump era. For a powerful network of conservatives, voting restrictions are now viewed as a political life-or-death debate, and the fight has all-but eclipsed traditional Republican issues like abortion, gun rights and tax cuts as an organizing tool.

That potency is drawing influential figures and money from across the right, ensuring that the clash over the legislation in Washington will be partisan and expensive.

"It kind of feels like an all-hands-on-deck moment for the conservative movement, when the movement writ large realizes the sanctity of our elections is paramount and voter distrust is at an all-time high," said Jessica Anderson, executive director of Heritage Action, an influential conservative advocacy group in Washington. "We've had a bit of a battle cry from the grassroots, urging us to pick this fight."

Several prominent groups have recently entered the fray: Anti-abortion rights group, the Susan B. Anthony List, has partnered with another conservative Christian group to fund a new organization, the Election Transparency Initiative. FreedomWorks, a group formed to push for smaller government, has initiated a $10 million calling for tighter voting laws in the states. It will be run by Cleta Mitchell, a prominent Republican attorney who advised former President Donald Trump.

Meanwhile, Heritage Action has announced a new effort also focused on changes in state voting laws. It included a $700,000 ad campaign to back GOP-written bills in Georgia, the group's first foray into advocating for state policy.

So far, the states have been the center of the debate. More than 250 bills have been introduced in 43 states that would change how Americans vote, according to a tally by the Brennan Center for Justice, which backs expanded voting access. That includes measures that would limit mail voting, cut hours that polling places are open and impose restrictions that Democrats argue amount to the greatest assault on voting rights since Jim Crow.

The fight over voting laws is also shifting to Washington, where the Democratic-led Senate will soon consider an array of voting changes. The package, known as H.R. 1, would require states to automatically register eligible voters, as well as offer same-day registration. It would limit states' ability to purge registered voters from their rolls and restore former felons' voting rights.

Among dozens of other provisions, it would also require states to offer 15 days of early voting and allow no-excuse absentee balloting. Democrats, who are marshaling their own resources behind the bill, argue that it is necessary to block what they describe as voter suppression efforts in the states.

Republicans contend it's a grab bag of long-sought Democratic goals aimed at tilting elections in their favor. Cruz claimed it would lead to voting by millions of "criminals and illegal aliens."

Stronger voting regulations have long been a conservative goal, driven by old -- and some say outdated -- conventional wisdom that Republicans thrive in elections with lower turnout, and Democrats in ones with more voters.