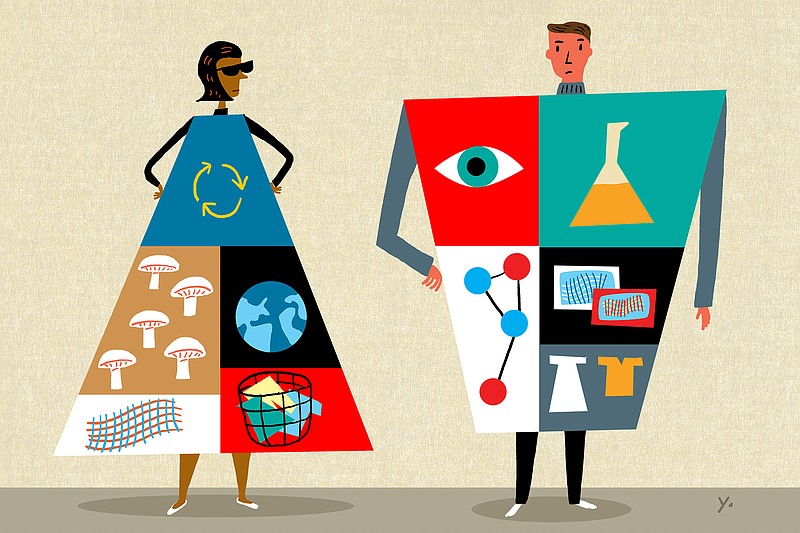 From collaborating on the creation of biofibers to the manufacturing of environmentally friendly tag fasteners, some in the apparel sector are working with technology start-ups to clean up the world’s closets. (James Yang/The New York Times) -- NO SALES; FOR EDITORIAL USE ONLY WITH NYT STORY FASHION SUSTAINABILITY BY ELLEN ROSEN FOR JAN. 26, 2021. ALL OTHER USE PROHIBITED. --

Sustainability in the fashion industry was once the focus of only a handful of designers like Stella McCartney and outdoor gear companies such as Patagonia.

But traditional and new brands are trying to improve a supply chain increasingly criticized for contributing to landfills and causing other forms of pollution throughout the manufacturing process.

From collaborating on the creation of biofibers to the manufacturing of environmentally friendly tag fasteners, some in the apparel sector are working with technology startups to clean up the world's closets.

The biggest problem rests with the volume of unwanted clothing that winds up in landfills. According to the Ellen MacArthur Foundation, which works to foster sustainability, clothing production globally roughly doubled from 2000 to 2015. During the same period, the number of times a garment was worn declined by 36%. All told, "the equivalent of one garbage truck full of clothes is burned or dumped in a landfill every second," its report found.

Over roughly the same period, according to the World Economic Forum, 60% more garments were bought, but consumers kept them for only half as long.

But some companies, like H&M, are trying to increase their own sustainability while also encouraging consumers to keep garments out of the trash. At H&M's flagship store in Stockholm, for example, customers can pay a nominal amount to have unwanted clothing transformed into new garments through a process that breaks down the old fibers and combines them with new ones.

The eight-step process is designed to make a point, not a profit. "We want to engage our customers and make them understand that their own garments hold value," said Pascal Brun, H&M's head of sustainability.

But traditional mechanical recycling that is in wider use has its limits. "As shiny as the fashion industry is on the outside, the supply chain has often relied on 19th-century equipment," said Stacy Flynn, the founder of Evrnu, a startup based in Seattle. Companies like Flynn's seeks to reduce fibers to their basic chemical components and build them back up with less impact on the environment.

Evrnu's first product, which Flynn said she hoped would become commercially available this year, converts the cotton in garments to lyocell, a cellulose fiber that is now made only from wood.

The process, called NuCycl, will update the initial recycling step of sorting, grading and shredding fabric by adding a camera that can more accurately identify a fabric's composition. Decorative trim, the content of the label or even the thread used can reduce the cotton content by as much as 20%.

"It's like the difference between cooking and baking -- you can be looser with ingredients when cooking, but with baking, you must be precise," Flynn said. "It's the same way with chemical recycling -- if you know what you've got, you can optimize the process."

The heart of the technology lies in the next step, at the pulp mill, where the shredded fabric is dissolved and turned into pulp. That pulp becomes a thick paper, to be shipped to the next part of the textile supply chain, the fiber producers. There it is repolymerized to make lyocell.

Evrnu has partnered with several brands, including Adidas and McCartney, to use the recycled fibers in their fabrics. "When the consumer is done with it or if the brand is stuck with a dog, those garments can all come back into the system, be repolymerized and turned into something new," Flynn said.

Another area of interest involves new fibers and materials that rely on products that are found in nature but not derived from animals.

Several companies, for example, are developing alternatives to leather, since hides are particularly problematic, from the methane-producing cows that produce it to tanning methods that often involve toxic chemicals such as chromium. Vegan leather, despite its environmentally friendly name, is no better because it uses plastic, said Theanne Schiros, a materials scientist and an assistant professor at the Fashion Institute of Technology in New York.

One alternative is mushroom leather, which relies on mycelium, or mushroom roots, to produce an animal-free alternative. Mycelium has been used for thousands of years in a variety of ways, Schiros said, even to dress wounds, but entrepreneurs and designers have set their sights higher.

In addition to Bolt Threads, a fiber and material producer that gained attention last fall when it announced its product and collaboration with several designers, others companies, like MycoWorks, are developing "leathers" from mycelium.

MycoWorks' chief executive, Matthew Scullin, said that while the company was exploring uses in automotive upholstery, the current emphasis was on apparel and footwear.

Schiros is part of a team at Columbia University working on a bioleather alternative; the latest prototype, she said, is "a naturally dyed, microbe-grown sneaker that is a part of Slow Factory's One x One initiative," referring to the nonprofit that works on sustainability and climate concerns.

The pandemic has forced her to work from home, rather than at a laboratory, but she has found a clever workaround.

She used her backyard to test how well the bioleather that had been treated with their plant-based tanning technology would break down -- in this case, decomposition is a good thing. After burying the sample, she tested the mass of the material, as well as the pH and the nutrients of the soil, for 60 days.

Her home-based experiment, she said, found that after seven days, the "samples had visibly deteriorated, were smaller in size and had lost over 70% of their mass."

She is also a co-founder and the chief science officer of Werewool, which is developing a wool fiber alternative. Started by three of her former students at FIT, the company seeks to create biodegradable fibers based on the DNA of proteins that already exist in nature.

Schiros has worked as well on an algae-based yarn also begun at the school, which is part of the State University of New York. Research is done in collaboration with Columbia, where Schiros has a research scientist appointment.

Companies hoping to provide "cradle to cradle" solutions -- the term used for processes that intend to keep materials within a circular economy, mindful of the end state of materials at the start of the design process. That is the idea behind Thousand Fell, a footwear maker that uses primarily recycled materials, said the company's co-founder Chloe Songer.

'A LITTLE BIT IN VAIN'

Thousand Fell also wants to make it easier for consumers to recycle their shoes. "You can do some great design thinking and great production, but if you're not set up to actively collect product, it's a little bit in vain, said Stuart Ahlum, the company's co-founder. To that end, in November, Thousand Fell teamed up with UPS to provide consumers with an easier way to recycle their worn-out footwear.

Ultimately these developments will transform the fashion world as long as customers buy in. The look and feel -- as well as the price -- have to work. "If we could make a shoe for $400 but no one buys it, it defeats the purpose," Ahlum said.

Additionally, being environmentally friendly is not enough. As Scullin of MycoWorks said: "There is an expectation floating around that consumers are willing to sacrifice quality for sustainability. But they're not."