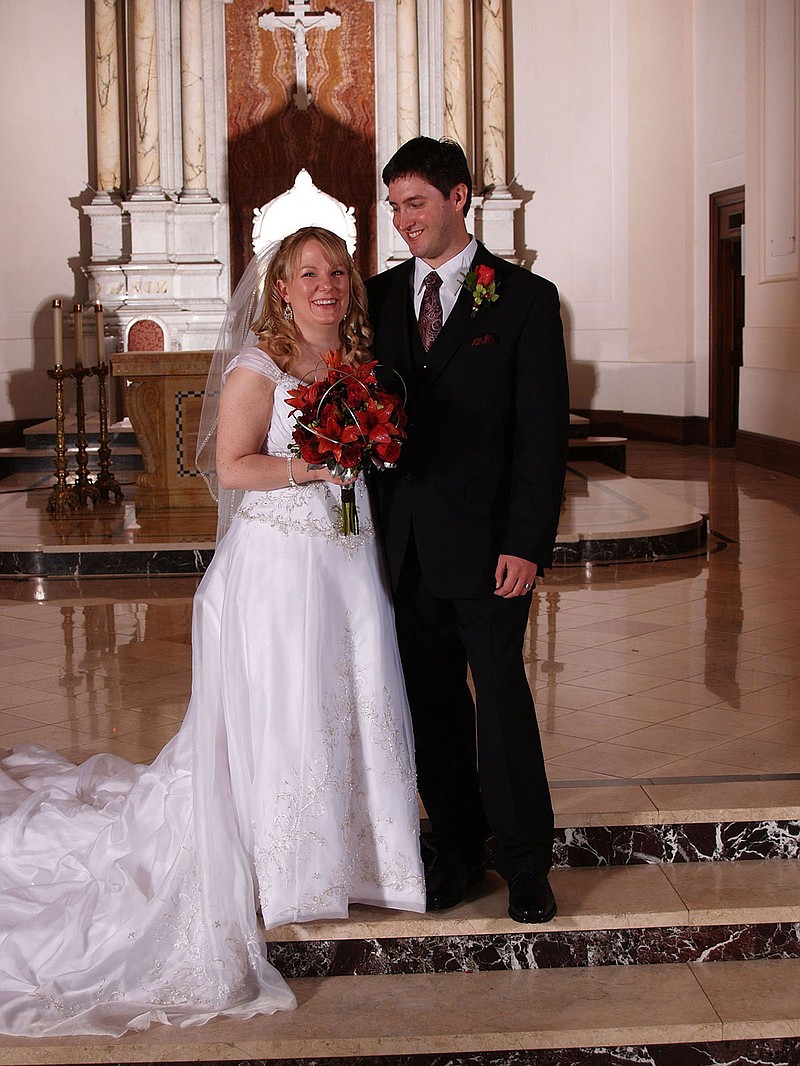 Tracy Goode and Tim Holder were married on Nov. 8, 2009. Tim was sick on their wedding day, but he felt better as soon as he saw Tracy. "I just went from feeling awful to just feeling incredibly wonderful and blessed," he says. (Special to the Democrat-Gazette)

Tim Holder and Tracy Goode were pals throughout their billiards league season. Afterward, Tim followed up on a cue that he missed hanging out with Tracy and gave her a call.

"We just kind of struck up a friendship," Tracy says. "We were both dating other people, so it was just merely a friendship."

They had similar senses of humor and their personalities meshed.

"We would kind of banter back and forth during the games and joke around, and after the matches, we would hang out and just play each other," Tim says.

Tim grew up in Arkansas, Tracy in Kansas, but both were fans of the Atlanta Braves.

"Once we figured that out, we had something to talk about and could cheer our team together," Tracy says.

Their teammates were mutual friends and the teams hung out together often after league events, so they spent time doing things with the group. After their league seasons ended, a year or so flew by with only passing contact.

In 2005, Tracy was in nursing school. Tim was working for Wichita State's Alumni Association, which was organizing an alumni road trip to Missouri Valley's Arch Madness in St. Louis.

"I think I reached out to her to just let her know I was going and thought she would think that was cool," he says. "Never in a million years did I think she would go."

In hindsight, though, he realizes he was hoping she would.

He wasn't necessarily thinking he and Tracy would start dating as the result of this trip, but she was someone he enjoyed spending time with and he missed seeing her.

"I can't remember if she decided that day or if it was the next day but I remember she told me, 'You know what? I'm gonna go, and I'll meet you up there,'" he says.

Tracy wasn't all that surprised to hear from Tim, though she might have been hard-pressed to say why.

"I just remember calling one of my good friends and telling her that I was meeting Tim up in St. Louis and that I just had this strong feeling that I was going to marry him," she says.

Tim rode the alumni bus to St. Louis and Tracy drove there on her own, and they watched the game together the first day they were there. When the game was over, they went to dinner and walked around the city.

"Next thing you know we were just holding hands. It just all kind of spontaneously came together," Tim says. "It just felt right. That was kind of our first date night."

They had dated for about two and a half years when Tim invited Tracy to visit his family in North Little Rock over the Thanksgiving break.

"I had never spent the holidays away from my family, but I said, 'OK, I'll go with you,'" she says.

On Thanksgiving Day they went for a walk around one of the Lakewood lakes. They fed the geese and strolled toward the Old Mill, and that's when Tim proposed.

"I knew I was going to propose on that trip but I hadn't known where or when exactly," Tim says. "I was so nervous and I was so shy. I don't think I believed she was going to say no but I just had that anxiety."

Tracy said yes, and she collected a handful of the bright orange leaves as an engagement keepsake.

They exchanged their vows a year later, on Nov. 8, 2008, at a Catholic church in Wichita. There was a reception following at the historic Broadview Hotel in downtown Wichita.

Tim had a sinus infection on their wedding day.

"I felt awful," he says. "It was difficult even to talk comfortably."

At the last minute they surprised the priest by requesting that he say the vows and let them answer with simple "I do's," rather than having them repeat them during the ceremony.

He had recovered in time for their delayed honeymoon trip to Hawaii a few weeks later. They were there the day after Thanksgiving and enjoyed the juxtaposition of tropical weather and Christmas festivities starting up around the island.

"It's one of the neatest places to experience the Christmas season," Tim says. "It's sunny and 87 degrees and you're eating guava and mango in your bathing suit or shorts on the beach and over the speakers you hear, 'Walking in a Winter Wonderland.'"

There was snow on the ground in Wichita when they arrived back home.

They moved to North Little Rock in 2009. They still play pool together when the opportunity arises.

"We do still have our cue sticks," Tim says.

They are currently shopping for a new house and their history together may have a bearing on their selection.

"Hopefully we can find a good extra room that we can put a pool table in," Tracy says.

She says: “I wanted to kick his butt in pool.”

He says: “I don’t think there was necessarily anything there.”

She says: “I don’t like a lot of attention so I was pretty nervous about having all eyes on us, but when we got to the reception it was just so much fun.”

She says: “Spend more time listening and less time talking, even if it’s listening to your significant other talk about their hobby or what happened at work. It will mean a lot to them that they can share things with you and you will be there to listen.”

He says: “Learn to let things go. I know I struggle with it plenty. I’ve rarely regretted for more than a few moments letting something go, but I’ve spent days regretting something stupid I did or said out of frustration, anger or stress.”