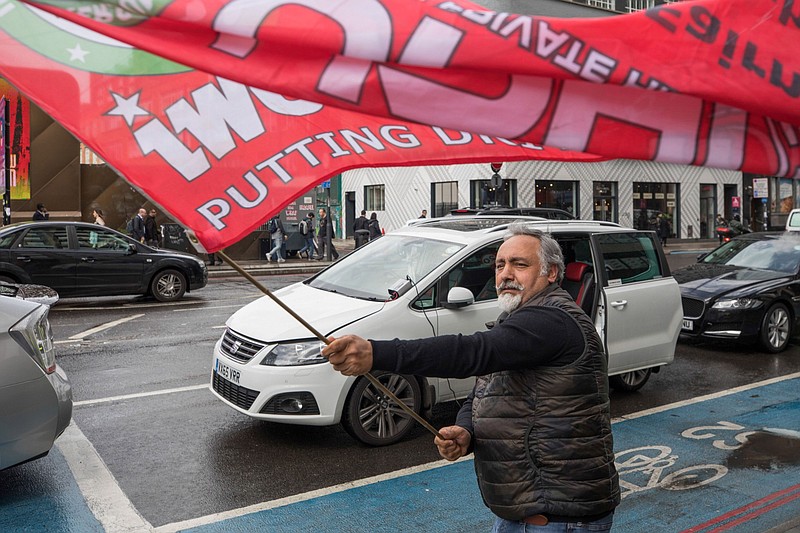 A protesting Uber driver waves a flag near the U.K. headquarters of Uber Technologies Inc. in London on May 8, 2019. MUST CREDIT: Bloomberg photo by Jason Alden.

For years, Uber has been locked in a fierce and expensive contest with global regulators over the protections it offers to drivers. The gig economy giant has argued that drivers are free agents, able to work when and where they like, and are therefore not directly employed by Uber -- or eligible for benefits like sick leave and overtime.

In its home state of California, Uber Chief Executive Officer Dara Khosrowshahi advocated for a "third way" of classifying workers -- other than as contractors or as full-time staff. And he's suggested that the company's approach in the state could be a blueprint for resolving similar labor battles brewing worldwide.

But last week, Uber said it would adopt a different model for its drivers in the U.K. After losing a watershed ruling in Britain's Supreme Court, the company agreed to reclassify all of its 70,000 drivers in the country as "workers," who are guaranteed specific benefits under U.K. law. The result is essentially a "fourth way" for Uber -- and another example of the growing pressure the company is facing from world governments to treat its workers better and comply with with local rules.

"Some countries have strong labor laws and some have none at all. We are all starting at different points," said Vanessa Bain, co-founder of worker advocacy group Gig Workers Collective. "The complexities of different legal systems continue to be a challenge for both the workers that are organizing and for the companies."

In the U.K., drivers will now be entitled to the minimum wage, vacation pay and a pension. Drivers in the country had already been getting health benefits since 2018 and will continue to get sickness, injury and parental leave as workers.

Maria Figueroa, director of labor and policy research at Cornell University's Worker Institute, said that while the new benefits are a step in the right direction, many will argue they don't go far enough because Uber will still function as an employer without the same responsibilities. Regardless of the limitations, Figueroa said, "advocates in some countries will go for it" because they see it as the first in a series of steps required to win more protections for the world's fast-growing population of gig workers.

"To engage in a fight for full benefits is a long and winding road," Figueroa said. "A lot of advocates are re-evaluating whether they want to do that."

In California, Uber and other gig economy companies effectively overturned a law last year that required them to classify their workers as employees. The company wrote and bankrolled a ballot proposal in the November election that overrode the law, but granted workers a few perks including a wage floor, a health insurance stipend and some mileage reimbursement. The proposal, sponsored by the country's largest gig companies, was the most expensive measure in state history.

"Uber's decision to classify drivers as employees in the U.K. after losing a Supreme Court appeal suggests it doesn't plan to shut operations there," according to Mandeep Singh, a technology analyst with Bloomberg Intelligence. "It's likely to add pressure on the Delivery segment, which has been unprofitable so far due to competition, yet we believe it could aid Uber's share in ride-sharing and force smaller peers such as Ola, Didi and Bolt to retreat from the U.K."

Under the new rules in both California and the U.K., drivers will only be paid for the time they engage in a ride, and wages won't cover time spent waiting for a passenger -- hours that account for roughly one-third of drivers' workdays on average, according to a study by the University of California, Berkeley.

Figueroa said the benefits offered in the U.K. for workers are similar to those required by Canada's "dependent worker" category. And while she said that advocates in many countries wouldn't be satisfied with the company's U.K. policy, some of them might lobby for similar protections in their own markets. "Even the unions and the workers who won the ruling will tell you this isn't enough, but it's what we got now," she said.

The drivers who first brought the U.K. case against Uber say the company hasn't gone far enough. Uber said drivers will be entitled to minimum wage after its accepted a trip from a customer, but the Supreme Court said drivers are working whenever they're logged into the app.

"While Uber undoubtedly has made progress here, we cannot accept anything less than full compliance with legal minimums," drivers James Farrar and Yaseen Aslam said in a statement. Farrar said on Twitter that they expect to be back in court against Uber.

The rights of gig workers and their employment classification is likely to remain a major flash point in the months and years to come. That will be particularly true as drivers return to work after the pandemic and companies increasingly face different pressures in different regions.

For example, in New York, a proposal to allow gig workers to form unions and collectively bargain could be introduced this spring. In Seattle, the focus is on extending a pandemic hazard pay increase for grocery store employees to people in other jobs. And the cities of San Francisco and Oakland, California last year passed laws giving gig workers up to 80 hours of paid sick leave during the pandemic.

"There's no one path to get to where we need to go," Bain said. "There are differences even among cities. It's a complicated system."