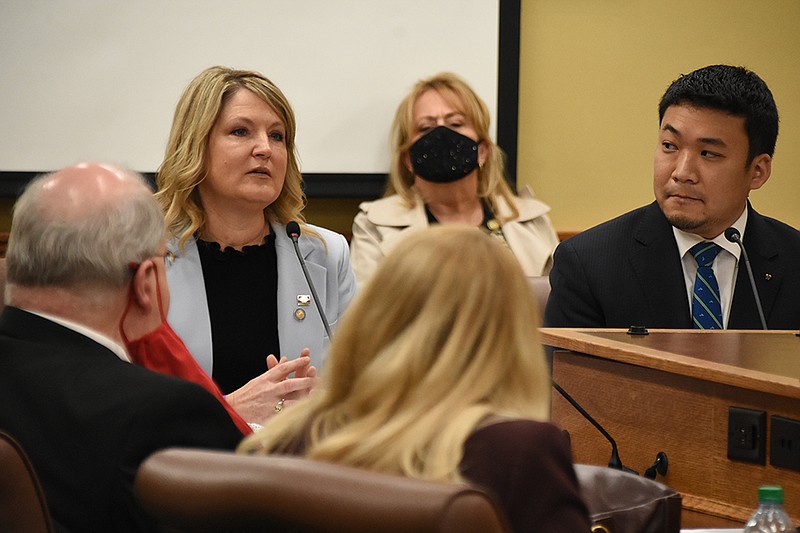 A bill that would deter schools from allowing transgender girls and women to play on the sports team that aligns with their gender identity is headed to Arkansas’ governor.

Senate Bill 354 by Sen. Missy Irvin, R-Mountain View, gives a private cause of action to students “deprived of an athletic opportunity” and students or schools suffering “direct or indirect harm” as a result of a kindergarten-through-12th grade school or higher-education institution not maintaining separate teams for female students to seek injunctive relief against the school, as well as monetary damages.

Gov. Asa Hutchinson said through a spokeswoman last week that he is "supportive of the objective of the bill but will continue to review the specific language before announcing his position."

House sponsor Sonia Barker, a Republican representative from Smackover, said the bill will "establish a level playing field for girls and women in our Arkansas schools," arguing that athletes assigned the male gender at birth have physiological advantages over cisgender girls and women.

Two lawmakers who spoke against the bill Monday said it discriminates against transgender youth and seeks to address a nonexistent problem.

"It's extra hard to be a kid and if you're a transgender kid, your life's even harder," Rep. Tippi McCullough, D-Little Rock, said.

National health, education and child-welfare organizations, including the National Education Association and the American Academy of Pediatrics have also urged lawmakers to vote against bills like SB354.

There are more than 20 states that have introduced legislation to prevent transgender athletes from participating on girls' and women's sports teams. Mississippi's bill has been signed into law, and a 2020 measure in Idaho is blocked by a court ruling.

The House voted 75-18 along party lines to send the bill to the governor.