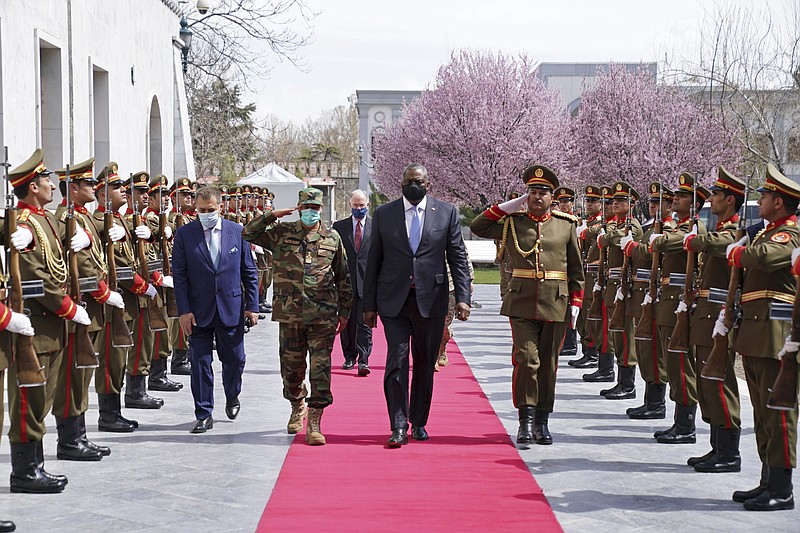 ADDS REFERENCE TO ACTING AFGHAN MINISTER OF DEFENSE YASIN ZIA - U.S. Defense Secretary Lloyd Austin, center, walks on the red carpet with Acting Afghan Minister of Defense Yasin Zia as they review an honor guard at the presidential palace in Kabul, Afghanistan, Sunday, March 21, 2021. Austin arrived in Kabul on his first trip to Afghanistan as Pentagon chief, amid swirling questions about how long American troops will remain in the country. (Presidential Palace via AP)

KABUL, Afghanistan -- U.S. Defense Secretary Lloyd Austin, on his first visit to Afghanistan as Pentagon chief, said Sunday that the Biden administration wants to see "a responsible end" to America's longest war, but the level of violence must decrease for "fruitful" diplomacy to have a chance.

With questions swirling about how long U.S. troops will remain in the country, Austin said that "in terms of an end date or setting a specific date for withdrawal, that's the domain of my boss." He said his stop in Kabul, the capital, where he met with military commanders and senior Afghan government officials, including President Ashraf Ghani, was intended to let him "listen and learn" and "inform my participation" in reviewing the future of the American force.

President Joe Biden said last week in an ABC News interview that it will be "tough" for the U.S. to meet a May 1 deadline to withdraw its troops from Afghanistan. But Biden said that if the deadline, which is laid out in an agreement between the Trump administration and the Taliban, were extended, it wouldn't be by a "lot longer."

Austin said the United States is "mindful of the timelines and the requirements that the Taliban has kind of laid out."

The timing, along with continued Taliban attacks on Afghan forces and the challenges of moving military equipment from a landlocked country with no ports, has raised questions about whether the United States has reached a window of time in which it is no longer feasible for all U.S. troops to leave by May 1 in an orderly fashion.

Austin, who arrived after a visit to India, said: "There's always going to be concerns about things one way or the other, but I think there's a lot of energy focused on, you know, doing what's necessary to bring about a responsible end, a negotiated settlement to the war."

The Taliban on Friday warned of consequences if the United States doesn't meet the deadline. Suhail Shaheen, a member of the Taliban negotiation team, told reporters that if American troops were to stay beyond May 1, "it will be a kind of violation of the agreement. That violation would not be from our side. ... Their violation will have a reaction."

A statement released by the presidential palace on the Ghani-Austin meeting said both sides condemned the increase in violence in Afghanistan. There was no mention of the deadline. Washington is reviewing the agreement the Trump administration signed with the Taliban last year and has been stepping up pressure on both sides in the protracted conflict to find a swift route to a peace agreement.

About 2,500 U.S. troops remain in Afghanistan, according to the Pentagon, with several hundred more deployed on a short-term basis. At the height of the war in 2010, the United States had more than 100,000 troops spread across the country, many in combat daily. More than 2,300 U.S. troops have been killed in Afghanistan, and many thousand more Afghans have.

The present situation has left the Biden administration picking from challenging options. While the deal the Trump administration negotiated called for the complete removal of U.S. troops this spring, it did not require the Taliban to reach a peace accord with the Afghan government first.

The Taliban say a cease-fire would be part of the peace negotiations. The insurgent movement has not attacked U.S. or NATO troops since signing the agreement, but it has waged a bloody campaign of violence on U.S.-trained Afghan troops, killing scores each month and encircling some Afghan cities.

But U.S. military commanders and NATO leaders have argued that the Taliban have not lived up to their part of the peace agreement, which includes a reduction in violence and a separation from al-Qaida and other terrorist groups.

Austin said he was confident in the ability of Gen. Austin Miller, the commander of U.S. forces in Afghanistan, to accomplish his mission "with the resources he has" and to protect American troops.

In a sharply worded letter to Ghani earlier this month, U.S. Secretary of State Antony Blinken said it was urgent to make peace in Afghanistan and that all options remained on the table. He also warned that it was likely the Taliban would make swift territorial gains if U.S. and NATO troops withdrew. The United States spends $4 billion a year to sustain Afghanistan's National Security Forces.

"It's obvious that the level of violence remains pretty high in the country," Austin said. "We'd really like to see that violence come down, and I think if it does come down, it can begin to set the conditions for, you know, some really fruitful diplomatic work."

Washington has given both the Taliban and the Afghan government an eight-page peace proposal, which both sides are reviewing. It calls for an interim "peace government" that would shepherd Afghanistan toward constitutional reform and elections.

Ghani has resisted an interim administration, causing his critics to accuse him of clinging to power. He says elections alone would be acceptable to bring a change of government.

Taliban officials have expressed interest in taking over the country's government again, raising concerns over whether advances in women's rights and democracy will last.

Turkey announced Friday that it will host a peace summit in April that was requested by the Biden administration in an effort to jump-start negotiations between the Afghan government and the Taliban. Ghani said he will attend if Hibatullah Akhundzada, the Taliban's top leader, also does.

During the presidential campaign, Biden vowed to end "forever wars." Still, some in his party appear torn over how rapidly U.S. forces should exit. Some Afghans fear it could backfire.

"It is time for it to come to an end," Sen. Richard Durbin, D-Ill., said Sunday on CNN's "State of the Union," emphasizing his opposition to further long-term military commitment in Afghanistan. "At this point," Durbin added, "I see no end in sight for our presence there. I want to make sure there is a safe exit of our troops; we try to keep the environment as stable as possible, but as far as engaging in an Afghanistan war for another decade, I'm opposed."

Sen. Tammy Duckworth, D-Ill., a former Army National Guard lieutenant colonel, countered: "I want American troops to come home, but I also want to fight the bad guys over there instead of allowing them to come here."

NATO Secretary-General Jens Stoltenberg said last month that the alliance "will only leave when the time is right" and when conditions have been met.

Austin has said little on the record about the stalemate. After a virtual meeting of NATO defense ministers, he told reporters that "our presence in Afghanistan is conditions-based, and Taliban has to meet their commitments."

Austin's stop in Afghanistan was his first return to a U.S. war zone in the Middle East since taking the Pentagon post. But he spent a great deal of time in the region during his service as an Army commander: A retired four-star general, Austin served in Afghanistan as commander of the 10th Mountain Division, and from 2013-2016 he was the head of U.S. Central Command, which oversees the wars in Iraq and Afghanistan.

The Afghanistan visit comes at the end of Austin's first overseas trip as secretary. After a stop in Hawaii, he went to Japan and South Korea, where he met with their defense and foreign affairs counterparts.

Information for this article was contributed by Lolita C. Baldor, Rahim Faiez and Kathy Gannon of The Associated Press; and by Dan Lamothe and Susannah George of The Washington Post. 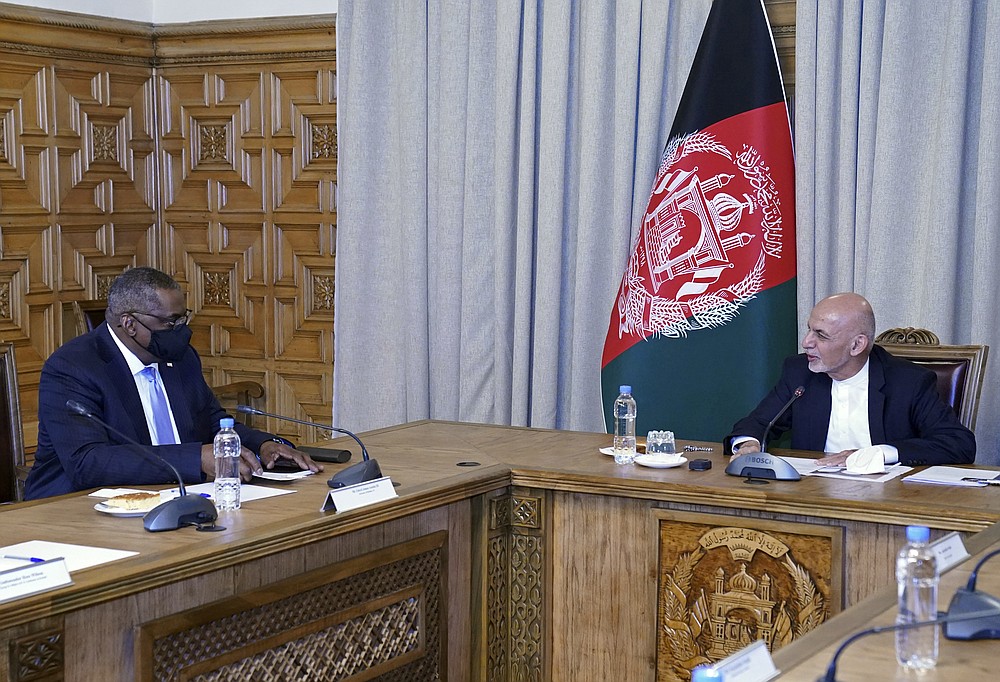 U.S. Defense Secretary Lloyd Austin, left, meets Afgan President Ashraf Ghani at the presidential palace in Kabul, Afghanistan, Sunday, March 21, 2021. Austin arrived in Kabul on his first trip to Afghanistan as Pentagon chief, amid swirling questions about how long American troops will remain in the country. (Presidential Palace via AP) 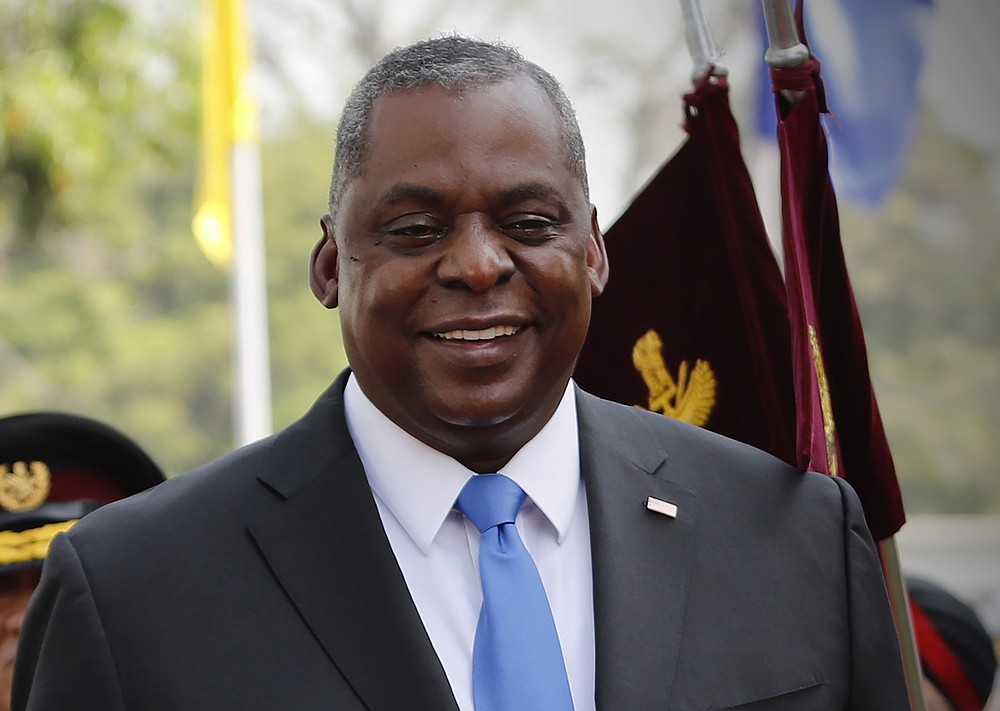 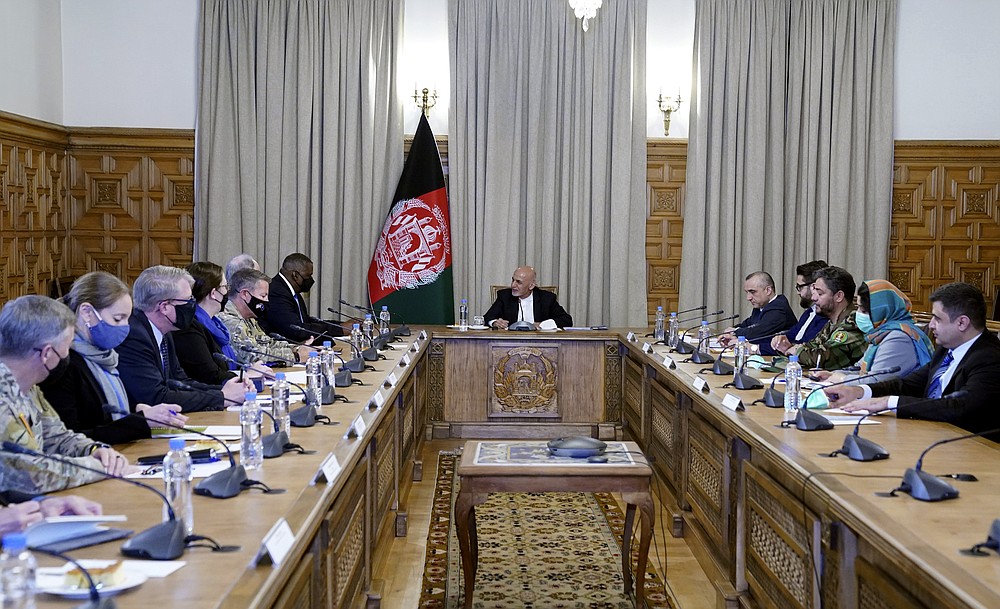 Afgan President Ashraf Ghani, center, meets with U.S. Defense Secretary Lloyd Austin, center left, and their delegations, at the presidential palace in Kabul, Afghanistan, Sunday, March 21, 2021. Austin arrived in Kabul on his first trip to Afghanistan as Pentagon chief, amid swirling questions about how long American troops will remain in the country. (Presidential Palace via AP)
ADVERTISEMENT