Pandemic an awful reality for those with dementia 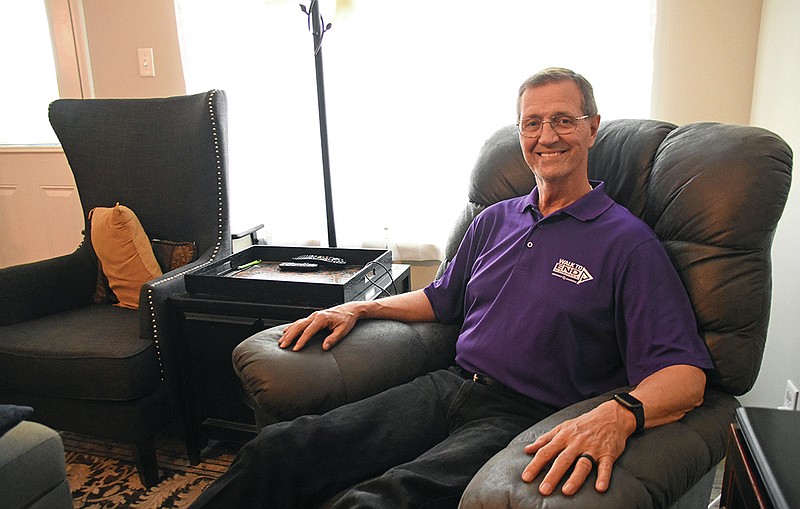 Mark Aloway poses for a photo Thursday, March 18, 2021 at his home in Austin. (Arkansas Democrat-Gazette/Staci Vandagriff)

Mark Aloway fears the isolation he has endured during the covid-19 pandemic could be progressing a disease he's working diligently to slow down.

"I get depressed because I can't do what I want to do," said Aloway, who was diagnosed with dementia in 2019. "My wife thinks I'm getting more agitated quicker. She says I get agitated with the kids or grandkids too quick. We fixed up a room in my house. It has a computer and TV. She says, 'Go to your room.'"

"I couldn't get the word out because I couldn't remember the word 'agitated,'" he said. "I think, 'You are an intelligent, educated individual. Why can't you remember this stuff?'"

During lockdown, Aloway took drives with his wife just to get out of the house. He'd walk around grocery stores for exercise. He does mental exercises using crossword puzzles and other activities to help preserve his brain.

Because of restrictions at her nursing home, there have been long stretches when Aloway couldn't visit his mother.

While a Centers for Disease Control and Prevention study released in August shows the aging population is reporting fewer mental health concerns during the pandemic than younger generations, experts warn the data doesn't focus on higher-risk sub-populations such as those with dementia.

A smaller survey by UsAgainstAlzheimer's shows about 65% of 176 respondents living with a diagnosis reported having more stress and 60% felt isolated.

Nearly 20 years ago, Aloway's mother, a retired nurse, expressed that she was having difficulty with daily tasks.

"She wasn't drinking enough with her medicine and it was burning her throat," Aloway said. "She was living independently, and we thought everything was good."

In 2004, Aloway's mother was diagnosed with Alzheimer's, the most common cause of dementia, a general term for loss of memory and other cognitive abilities that can interfere with daily life.

That ignited decades of personal research and eventually led to Aloway volunteering with the Arkansas Chapter of the Alzheimer's Association.

Then, the Little Rock native and his wife began noticing signs of the very disease he was working to educate the public about.

"My wife would say, 'Mark, you forgot to do that,'" he said. "It progressively got worse. She said, 'Honey, you and I both know something is wrong.'"

Aloway was diagnosed with early-stage dementia -- linked, he said, to several ministrokes and concussions.

He still helps care for his 88-year-old mother, but he also depends on his wife of 48 years for tasks such as taking his medicine.

The couple, who met at church when he was 12 and she was 10, endured through his career in the Air Force. They raised a family, he retired. They've taken care of ill parents, and now they face new challenges as Aloway's disease progresses.

Aloway once lived an active life of traveling and educating the public, but that has stopped.

"I don't go a few miles from my house without my wife coming with me because I'm afraid of getting lost," he said.

He worries about his mother. Routine is important for her, Aloway said.

She doesn't understand the situation, he said. She asks why no one visits and thinks people are lying to her when they tell her about covid-19, or that rules keep them away.

Aloway had to be hospitalized during the pandemic because of a separate medical issue and couldn't see his wife or family.

"Isolation is detrimental to anyone with dementia, because they start thinking internally and it is not a good thing," Aloway said. "I was constantly worried about my wife and kids. I've been married for 48 years, and outside military deployment I've never been away from my wife."

Research is key to treating dementia, and it will be key in helping the population understand the effects of covid-19, he said.

About 58,000 people 65 or older live with Alzheimer's in Arkansas, according to data from the Alzheimer's Association. The data also shows Medicaid spent about $396 million on Alzheimer's care in the state in 2020.

Kirsten Dickens, executive director of the association's Arkansas chapter, said one of the symptoms is difficulty or confusion around time or place, or both. That can be particularly difficult for those suffering from the disease if they are isolated in a long-term facility or separated from caregivers because of hospital stays.

"That isolation and fear has been scary and created new challenges," Dickens said. "It has been uncharted territory."

Aloway explains Alzheimer's with the analogy of a four-drawer filing cabinet. The first drawer is a person's earliest memories, and the fourth drawer is the most recent.

"They start losing that fourth drawer," Aloway said. "They have a very good memory of the old stuff."

Dickens says covid-19 can be difficult to understand if the person is revisiting a past time in their mind. Often they are also confused about wearing a mask and virtual communication.

It's possible that isolation is revealing some dementia symptoms that family members are noticing for the first time, but the pandemic also could slow response from caregivers because of access to services.

Dickens also believes that education is key to helping loved ones with dementia, and noted there are some tricks of the trade and dementia best-practice guidelines that can be helpful. The association was quick to start virtual training and support groups for that reason.

"The only way to change the trajectory of the disease is to increase research," Dickens said. "Both on the national and local level."

A bill passed this year by the Arkansas Legislature, Act 391, could help advocates be more responsive to any needs of the Alzheimer's community, including resources to treat effects of the pandemic, Dickens said.

The law will set up an Alzheimer's's and dementia advisory council. It will help submit applications for federal funding and focus on topics such as workforce, caregiving, Medicaid and other public health issues for the dementia population, according to an Alzheimer's Association report.

Aloway already keeps a calendar and makes notes to remind himself of simple tasks. His wife stays on top of his medicine.

Things could get harder. He has prepared his family for days when maybe he's incapable of functioning on his own. He's set up a power of attorney, and he's made decisions about his finances and his eventual burial.

"I have written down all my codes and passwords, and I had my daughter come over and we went through every one on my computer," Aloway said.

Like many people with the illness, Aloway reads every article he can on the subject and waits for better research and better resources that he hopes will keep his mind intact longer.

"People have to understand that research is all-important in how we find a cure," Aloway said. "Our goal is to put an end to Alzheimer's. Period."