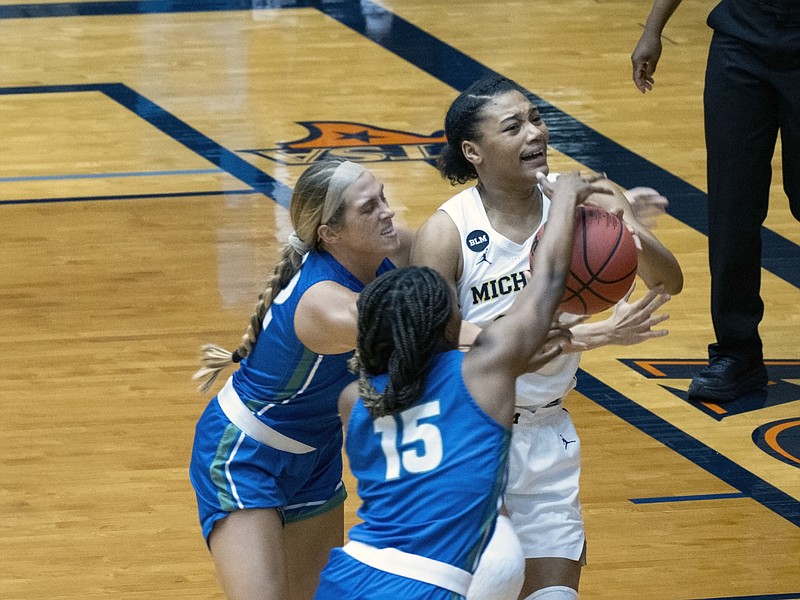 Michigan guard Naz Hilmon, right, goes up for a shot against Florida Gulf Coast guard Tyra Cox, center, and Emma List, left, during the first quarter of a college basketball game in the first round of the women's NCAA tournament at the University of Texas San Antonio Convocation Center in San Antonio, Texas, Sunday March 21, 2021. (AP Photo/Michael Thomas)

SAN ANTONIO -- South Carolina Coach Dawn Staley was already thinking ahead after getting her 500th career win in the first round of the women's NCAA Tournament.

Aliyah Boston had 20 points and 18 rebounds and Victaria Saxton also scored 20, leading the top-seeded Gamecocks to a 79-53 victory over Mercer on Sunday.

South Carolina (23-4) grabbed the lead for good when it closed the first half with a 16-5 run after a timeout by Staley, who had started the second quarter with what she called a "funky lineup" on the court.

"She just kind of talked about how we haven't played in two weeks, so we're just trying to get back in the flow. Don't worry about it. Just keep going, pushing," Saxton said of the coach's message during that timeout. "So that's just what we did. We just went out there and kept playing our game."

The Gamecocks were national champs in 2017, when the Final Four was last played in Texas. They went 32-1 last season, spent the final 10 weeks at No. 1 and Staley was the AP coach of the year, but they didn't get a chance to win another title because the NCAA Tournament was canceled because of the pandemic.

Next up for South Carolina is a matchup with Oregon State on Tuesday.

Staley is 328-102 in her 13 seasons at South Carolina, after going 172-80 in eight seasons at Temple. The SEC Tournament champion Gamecocks are in their ninth consecutive NCAA Tournament, winning in the first round each time.

"I mean it's a great milestone," Staley said. "It means that you've been in the game a long time. And more than likely you've had some great players that allows you to get to this point, from my Temple days to my South Carolina days. ... I'm forever indebted to them."

Boston, the All-American forward from the U.S. Virgin Islands, had 15 points and 10 rebounds at the break.

Rhyne Howard and Chasity Patterson scored 14 points apiece and No. 18 Kentucky grinded out a win over Idaho State.

The game wasn't offensively pleasing until a wide-open fourth quarter. The Wildcats, the fourth seed in the River Walk Region, took an opening punch from the 13th-seeded Bengals and then battled back.

The Bengals had 31 points through three quarters and 32 points in the fourth, outscoring Kentucky by eight.

Blair Green added 10 points for the Wildcats (18-8), who face fifth-seeded Iowa in the second round on Tuesday in a matchup of Howard and the Hawkeyes' Caitlin Clark, the nation's leading scorer at 26.7 points per game.

Though Howard, one of the four finalists for the Naismith Trophy, was held well below her 22.3 scoring average, she had 9 rebounds, 5 assists, 4 steals and a block.

Diaba Konate led the Big Sky Conference champion Bengals (22-4) with 16 points before fouling out in the middle of the fourth.

Rennia Davis had 24 points and 14 rebounds and No. 3 seed Tennessee used a dominant second half to beat 14th-seeded Middle Tennessee.

Rae Burrell scored 22 points and Jordan Walker had nine points and 14 rebounds for Tennessee (17-7). The Vols outrebounded the Blue Raiders 56-21.

In other games in the River Walk Region, UConn did just fine without Coach Geno Auriemma, with Paige Bueckers scoring 24 points to lead the top-seeded Huskies to a 102-59 win over High Point. Auriemma is recovering from the coronavirus and missed the opener. Associate head coach Chris Dailey filled in for the Hall of Famer, who is also going to miss the second-round game against Syracuse on Tuesday. Dailey is 11-0 filling in for Auriemma over their time together at UConn (25-1). Bueckers, the third player ever to make first-team All-America as a freshman, had 13 points, 5 rebounds and 3 assists at the half as UConn led 53-29. Christyn Williams (Central Arkansas Christian) scored 13 points and had six rebounds for UConn. ... Leigha Brown missed more than a month in the middle of the season because of the coronavirus. She looked fully recovered in Michigan's women's NCAA Tournament opener. Brown scored 28 points, including 17 in a row for sixth-seeded Michigan at one point, and the Wolverines beat 11th-seed Florida Gulf Coast 87-66. Brown missed 35 days between her own covid-19 issues and Michigan being on pause. Michigan (15-5) will play Tennessee in the second round on Tuesday. It's the third straight NCAAs that the Wolverines have reached the second round. The win snapped the Eagles' 25-game winning streak which was the second longest in the nation, trailing only California Baptist's 27-game run. ... A showdown of two of the nation's top-10 scorers was nearly over before it really got going. Central Michigan star Micaela Kelly picked up her third foul with 1:11 left in the first quarter on an unfortunate trip near midcourt. And the nation's leading scorer, Caitlin Clark, and her Iowa teammates took advantage. Clark finished with 23 points, 7 rebounds and 7 assists, Monika Czinano also scored 23 points, and No. 5 seed Iowa beat 12th-seeded Central Michigan 87-72. Kelly had eight points in six minutes but Clark combined with Kate Martin for 23 points and five three-pointers in the opening 10 minutes to give the Hawkeyes a 27-20 lead. Kelly, ranking seventh at 23.9 points, finished with 23 points and four three-pointers in 27 minutes. ... Elizabeth Kitley had 23 points and No. 7 Virginia Tech built a big lead and held on for a 70-63 win over 10 seed Marquette. The Golden Eagles used a 14-2 run to cut it to 3 with 39 seconds to go. Marquette missed its first eight three-pointers before making its next four, capped by two from Lauren Van Kleunen, to power that run. Kitley missed a jump shot on the next possession but Marquette got the rebound and Virginia Tech made two free throws before a miss on the other end. Kitley also had 8 rebounds, 4 assists and 3 blocks to star for Virginia Tech (15-9) which was in the tournament for the first time since 2006 and the 10th time overall. The Golden Eagles (19-7) were making their fourth consecutive trip to the tournament and 13th overall. ... Moon Ursin scored a career-high 24 points as Baylor had no problem in its opener, cruising to a 101-52 win over Jackson State on Sunday. NaLyssa Smith scored 18 points on 8-of-9 shooting and grabbed 10 rebounds for the second-seeded Bears (26-2). Jordyn Oliver added 14 points and seven rebounds, and Dijonai Carrington and Queen Egbo each scored 10 points for the three-time national champions, including 2019 when the tournament was last played. Keshuna Luckett led the 15th-seeded Tigers (19-6), the five-time Southwest Athletic Conference representatives, with 15 points. Ameshya Williams had 14 points and 14 rebounds and Dayzsha Rogan scored 10. ... Emily Engstler scored 18 points and made 3 three-pointers in the fourth quarter and No. 8 Syracuse pulled away from No. 9 South Dakota State for a 72-55 victory. Syracuse led 50-48 to open the fourth quarter before Englstler struck from long range on consecutive baskets for the Orange and Syracuse slowly pulled away from there. Her third from long range took two bounces on the rim before falling in to put Syracuse ahead 66-52 with 3:19 to play. Syracuse (15-8) got even for a second-round loss to the Jackrabbits in 2019. Paiton Burckhard scored 17 for South Dakota State (21-4).

Kiana Williams scored 20 points while becoming Stanford's career leader in made three-pointers, and six teammates also hit from long range as the top-seeded Cardinal overwhelmed women's NCAA Tournament first-timer Utah Valley 87-44. Stanford never trailed after Williams, who made 6-of-11 from beyond the arc, hit a three-pointer for the first basket in the opening minute and tied the school mark of 295 held by Candice Wiggins. Lacie Hull added 12 points for Pac-12 champion Stanford (26-2). Josie Williams had 18 points to lead Utah Valley (13-7) ... Natasha Mack scored 27 points and grabbed 15 rebounds to lead Oklahoma State to an 84-61 victory over Wake Forest. Mack was 13-of-22 shooting, feasting on variety of shots inside to send Oklahoma State (19-8), the eighth seed in the Alamo Region, into a second-round matchup. She was also a force on defense with 11 rebounds on the defensive boards and blocking four shots, extending her nation-leading total to 111. Ja'Mee Asberry, who combined with Mack as one of the nation's top-scoring tandems with a combined 37.2 points per game, added 18 points with four three-pointers. Christina Morra led Wake Forest with 18 points on 8-of-14 shooting for the ninth-seeded Demon Deacons (12-13).

Jada Boyd scored 15 of her 18 points in the second half to help top-seeded North Carolina State overcome a slow start and coast to a 79-58 win over 16 seed NC A&T. N.C. State (21-2) was making its fourth consecutive tournament appearance and 26th overall, but earned a No. 1 seed for the first time. The Aggies led by as many as six in the second quarter. But N.C. State used a big run to take a seven-point lead into halftime before Boyd scored the first six points of the second half to make it 50-37 with 7½ minutes left in the third. Elissa Cunane, N.C. State's 6-5 leading scorer, added 12 points despite fighting through near-constant double teams. Cunane was coming off an MVP performance in leading the Wolfpack to a second consecutive ACC tournament title by scoring a combined 70 points in three games. NC A&T (14-3), which won the Mid-Eastern Athletic Conference title, was making its fifth trip to the tournament and third in six seasons. The Aggies dropped to 0-5 in the tournament and 0-10 against N.C. State. They were led by Chanin Scott, who had 23 points and seven rebounds. ... Elena Tsineke scored 18 points, including the go-ahead basket with 1:32 remaining, to help South Florida to a 57-53 win over Washington State. Tsineke's driving shot, which came soon after a three-pointer by Washington State's Charlisse Leger-Walker, gave the eighth-seeded Bulls (19-3) a 54-53 lead. The ninth-seeded Cougars (12-12) had several chances to overtake South Florida, but Leger-Walker missed two driving shots and was called for traveling, all during the final 1:07. The Bulls hit free throws down the stretch to seal the win. Leger-Walker, an all-Pac-12 selection and the league's freshman of the year, matched Tsineke's 18 points but converted only 4 of 18 field goal attempts, including 2 of 10 three-pointers. Johanna Teder supported Leger-Walker with 16 points. 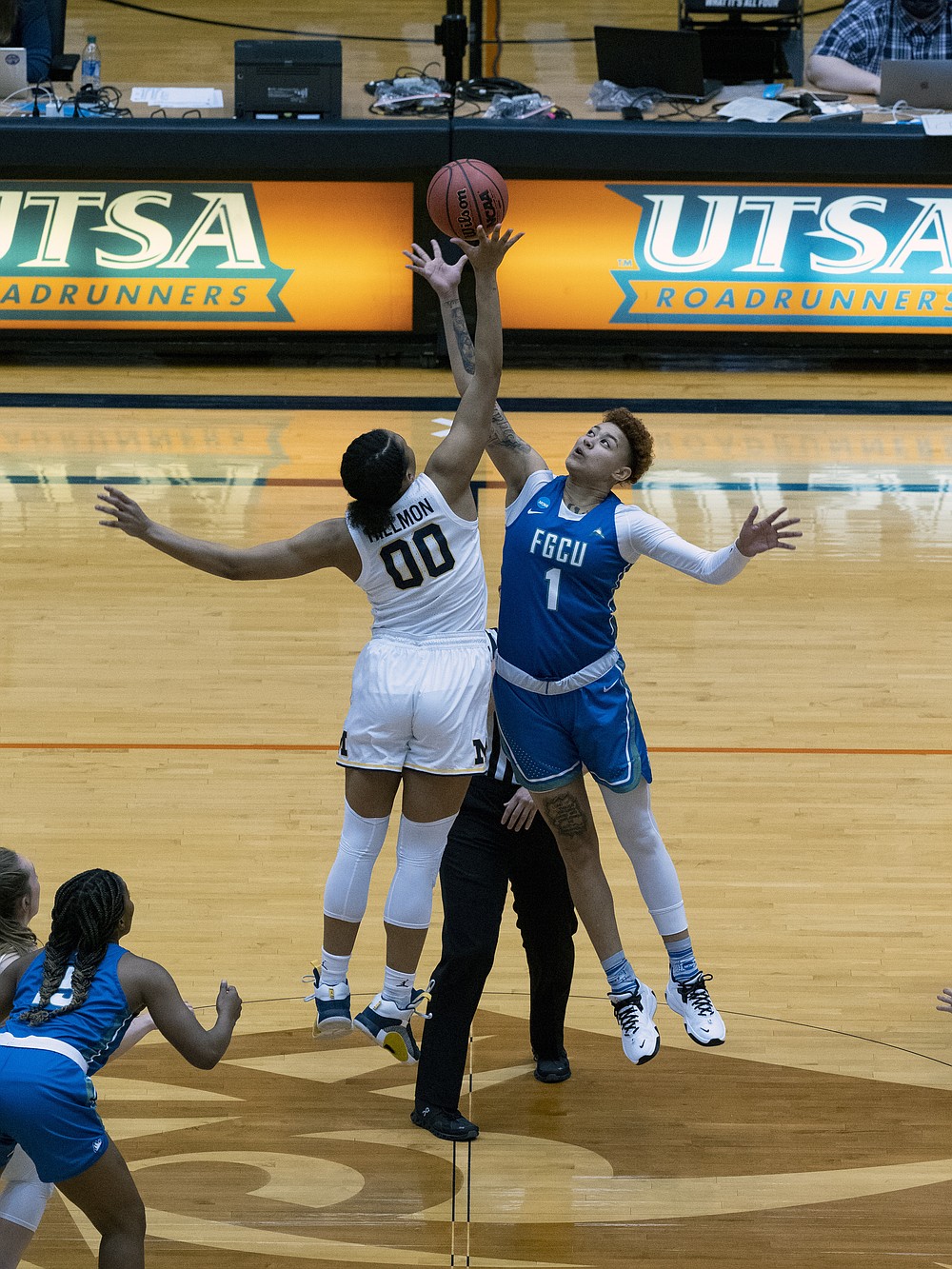 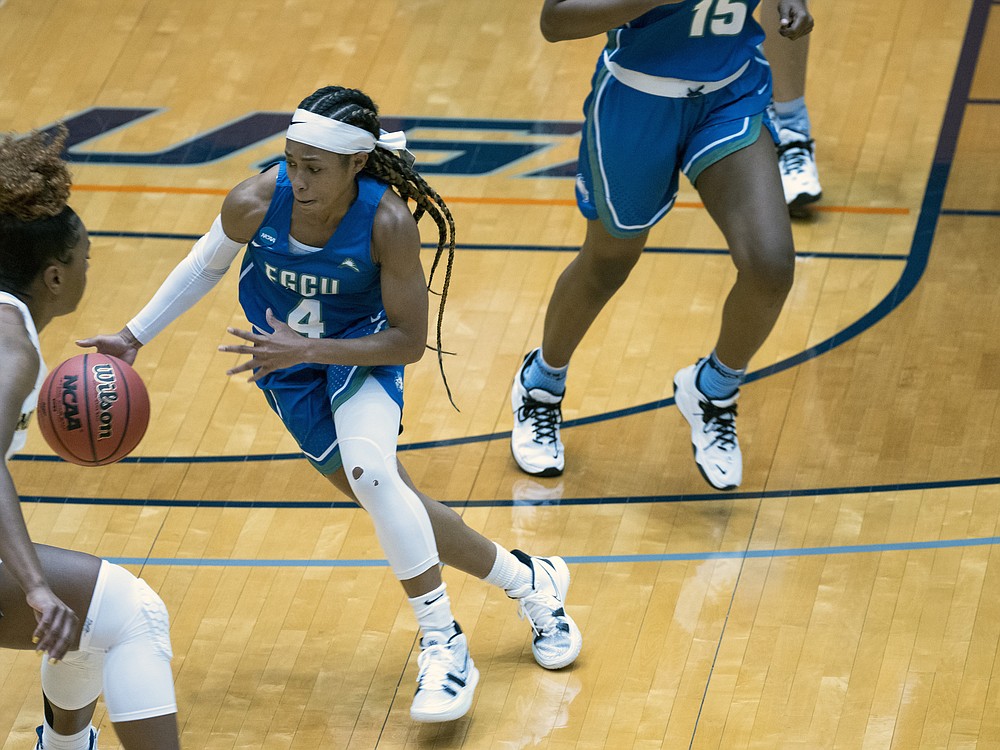 Florida Gulf Coast guard TK Morehouse (4) drives the ball against Michigan during the first quarter of a college basketball game in the first round of the women's NCAA tournament at the University of Texas San Antonio Convocation Center in San Antonio, Texas, Sunday March 21, 2021. (AP Photo/Michael Thomas) 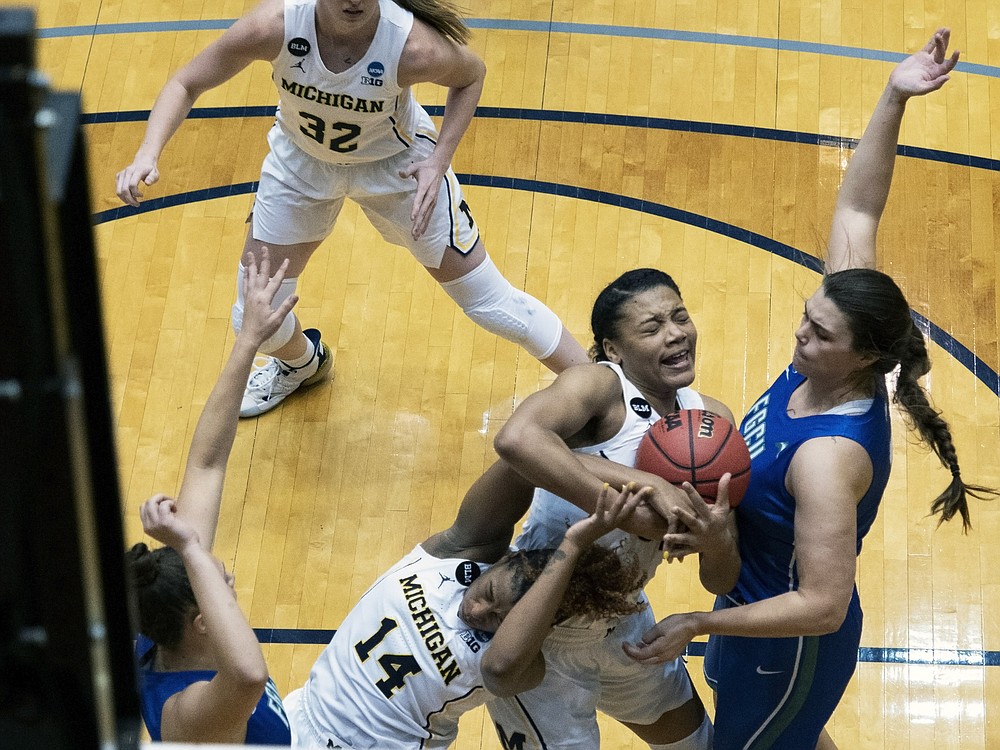 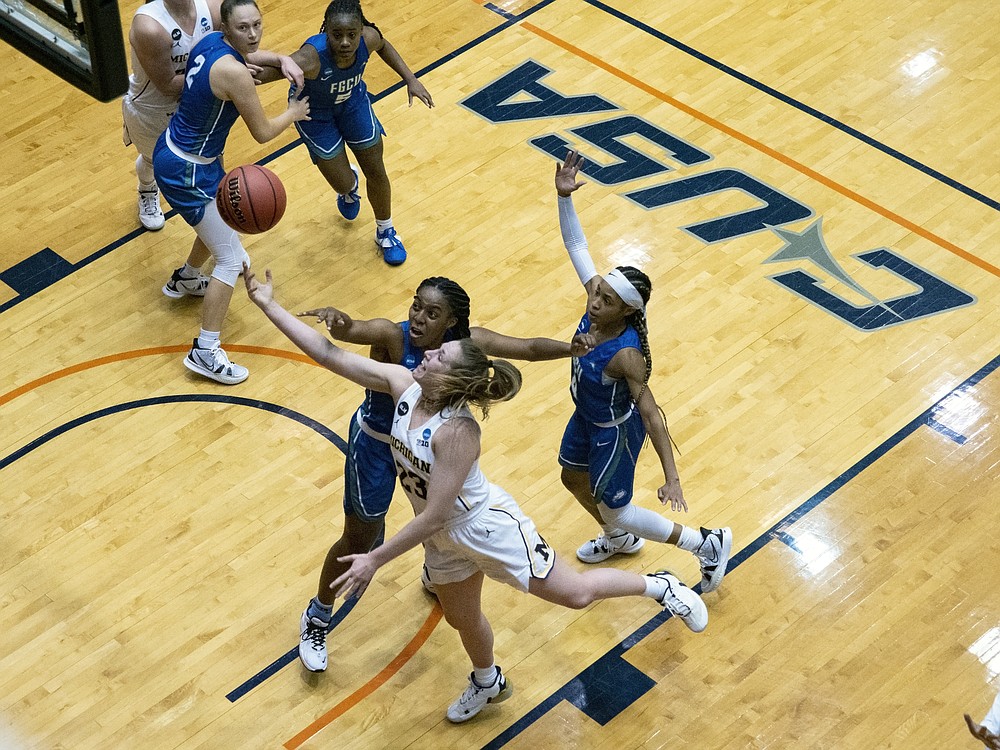 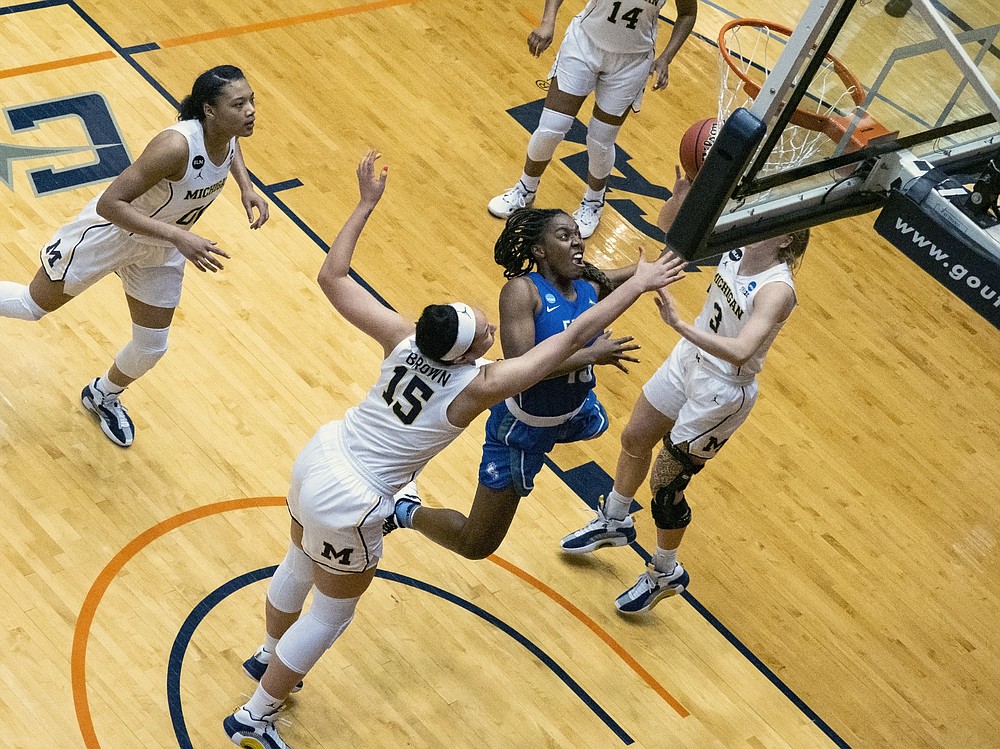