TELEVISION: 'Genius: Aretha' an homage to the Queen of Soul 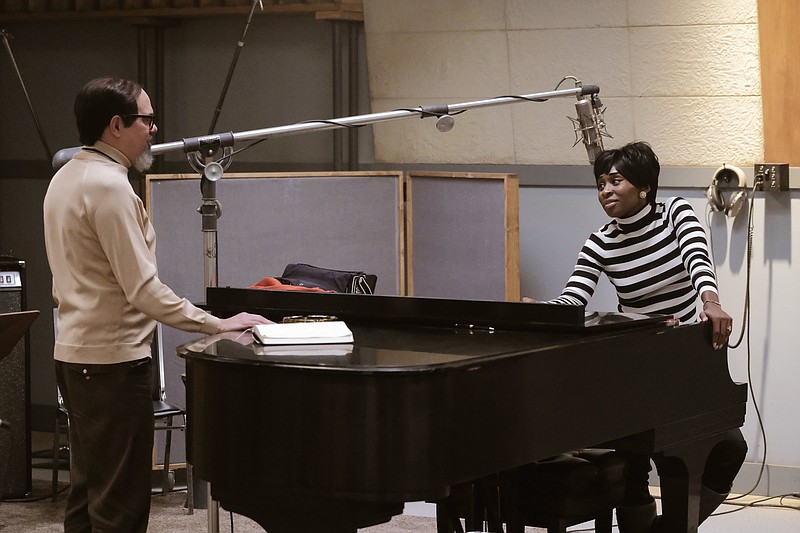 Atlanta native David Cross' acting career has spanned a wide range of roles over the past three decades, much of it on the comedic end including "Arrested Development," "Modern Family" and IFC's "The Increasingly Poor Decisions of Todd Margaret."

But he can do drama just as well, as evidenced by his role as Jerry Wexler, Aretha Franklin's producer, manager and trusted confidante in the National Geographic series "Genius: Aretha" focused this season on the "Queen of Soul." The eight-episode series, which debuted Sunday, covers a good swath of Franklin's life and was shot in metro Atlanta.

Wexler was one of the most powerful and influential record producers and executives during the early rock era. He co-headed Atlantic Records from 1953 to 1975. As Ashley Kahn of Rolling Stone wrote when he died at age 91 in 2008, "He was a national tastemaker and a prophet of roots and rhythm."

He also signed Franklin to Atlantic in 1967 and guided her to new glory with classic hits such as "Respect" and "Chain of Fools."

"Jerry and Aretha had a very special relationship," said Cross in a recent interview with The Atlanta Journal-Constitution. "It was part of the attraction for me to take this job. We were able to show how it evolved over the decades. It became less formal. He became not just a producer and manager but a friend and father figure. We had time to let that relationship breathe over eight episodes."

Cross, 57, sampled old video and audio of Wexler and lowered his speaking voice for the part. "I tried to make it more Bronx," he said. And he was impressed how much hair, makeup and wardrobe made him resemble the actual Wexler. "Production was [expletive] stellar. Their attention to detail, they [expletive] nailed it!"

He also enjoyed working with Cynthia Erivo, the Grammy and Tony-winning singer and actress who plays the adult Franklin in the series.

"It was such a treat getting to listen to and watch her sing and perform over and over again," Cross said. "That never got old. She's an amazing singer."

The series showrunner and Pulitzer-Prize-winning playwright Suzan-Lori Parks said she felt Cross "totally captured the spirit of Jerry Wexler, the whole vibe. This intense man came into Aretha's life at just the right time. It was a joy on set with David. He always cracked the best jokes. Some of them we got into the scenes for fun."

"Genius" in each episode jumps time periods like the "This Is Us" style, a way to properly frame different parts of her life and how she evolved over the years. The setup also illustrates her complicated relationships with her philandering preacher father, played by Courtney B. Vance, and her sister Carolyn (Rebecca Naomi Jones), a fellow singer.

By coincidence, a big-budget movie about Franklin called "Respect" was shooting at the same time in metro Atlanta featuring Jennifer Hudson as Franklin, a role Franklin herself endorsed before she died in 2018. The film was supposed to come out before the National Geographic series in limited release on Christmas Day for Oscar consideration, but ended up getting bumped to August due to the pandemic.

Parks admitted that this was a "weird" situation since she is friends with Liesl Tommy, the director for "Respect."

"We didn't run into each other," she said. "We didn't compare notes. She's awesome. Jennifer Hudson is awesome. I don't care that we are both going to be out this year. Aretha is the Queen of Soul. It's great that there is this appetite to honor and celebrate this amazing Black woman."

Cross is friends with Marc Maron, the "other" Jerry Wexler in "Respect." "He and I joked about the dueling Jerry Wexler," he said.

"Respect" finished their shoot in mid-February, less than a month before everything shut down. "Genius" had to stop five episodes in and finish the final three later in the year under covid-19 restrictions.

Parks said they had to shoot for fewer hours per day, pare down the scripts and reduce the number of people in various scenes. They also had to create concert scenes super carefully, often bringing in extras row by row. "It would take forever," she said.

But in the end, Parks didn't think the final product suffered.

"We crossed the finish line," she said. "We dug down deep. I'm a Black woman. When things get tough, we keep on going. We were in Atlanta where there has been so much civil rights and social justice reckoning. We were charged and fed by the difficulties."