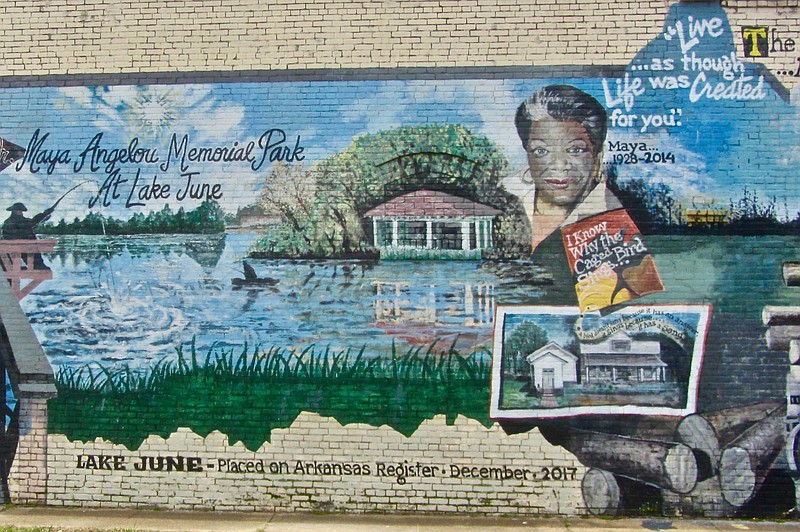 Maya Angelou is the central figure in a downtown mural at Stamps, where she grew up. (Special to the Democrat-Gazette/Marcia Schnedler)

Women have almost always played a supporting role, or none at all, in the telling of Arkansas history. A project unveiled this month aims to move them closer to center stage.

Created by the Arkansas Women's History Institute, "Rightfully Hers" maps out "A Trail of Women's Activism in Arkansas." It pinpoints 31 locations intended "to cover every region of the state as well as focus on the stories of underrepresented groups."

The most widely known figure on the "Rightfully Hers" map is author and activist Maya Angelou. There are other familiar names, but a majority of the honored women and their organizations are likely unknown to most Arkansans.

"The impact and importance of women has always been attached to the men in their lives or to the community," says Amanda Whitley, president of the Arkansas Women's History Institute. "But women have been influential in just about every decision made in our history. It just takes a little more time to find those stories and memories than it does for the 'white man's narrative.'"

Founded in 1983, the nonprofit institute has hosted workshops, lectures and symposiums over the years. The "Rightfully Hers" debut is timed to mesh with Women's History Month, in lieu of the in-person event that normally marks the occasion.

"We sought to include women activists from different regions of the state," explains Rachel Silva Patton, chair of the institute's programming and outreach committee, "There is a particular emphasis on women of color and other underrepresented communities, as well as including some lesser known women and events."

A surprising absentee from the "Rightfully Hers" map is Daisy Gaston Bates, famed for her courageous mentoring of the Little Rock Nine students who desegregated Central High School in 1957. Bates is likely to be added to the map at some point, according to Whitley.

Here is a sampling of the current listings, with introductory notes from the project's website: arkansaswomen.org/rightfully-hers.html.

◼️ Maya Angelou Childhood Home, Stamps: "Angelou was raised by her grandparents in Stamps. She was active in the civil-rights movement, working with Malcolm X in the organization of Afro-American Unity. She published an acclaimed autobiography, 'I Know Why the

Caged Bird Sings,' among her many writings."

◼️ Sue Cohen Williams and the Williams Branch Library, Little Rock: "She represented African-American teachers in the lawsuit challenging the rate of Little Rock teachers' salaries based solely on skin color. A federal appeals court decided in her favor in 1945. She was also president of the Phyllis Wheatley YWCA in downtown Little Rock."

◼️ African-American Order of the Eastern Star Meets to Support Black Women's Suffrage, Pine Bluff: "On July 2, 1919, more than 500 members of the African-American Order of the Eastern Star met in the M.W. Prince Hall Grand Lodge of Arkansas to support both the 19th Amendment and voting rights for Black women. This meeting was unique in its support for both causes."

◼️ Ruth Coker Burks, "Cemetery Angel," Files Cemetery, Garland County. "In the midst of the 1980s AIDS epidemic, Ruth Burks provided support for dozens of men who were dying of AIDS. She treated the men with dignity and compassion for the pain, physical and emotional, that marked their final days. She also ensured that they would have a proper final resting place, providing for the funerals of dozens of men in Files Cemetery."

◼️ Annie Mable McDaniel Abrams Home and Museum, Little Rock: "Annie Mable McDaniel Abrams is a retired educator and a political, social, civic and community activist. She was instrumental in campaigns to rename Little Rock streets in honor of Daisy Bates and Mayor Charles Bussey. Most notably, she was a leader in the campaign to rename High Street in honor of Martin Luther King Jr."

◼️ Villa Rosa, Home of Rosa Zagnoni Marinoni, Fayetteville. "Born in Italy and raised in New York, Rosa Marinoni moved to Fayetteville in 1908. She established renown as a poet of Ozark society and worked timelessly to cultivate women's involvement in Fayetteville literary life. A suffragist, she trained women for first aid during World War I."

◼️ Freda Hogan Ameringer, Suffrage and Coal Mining Activism, Sebastian County. "Freda Hogan Ameringer was an Arkansas journalist and activist in the nineteen-teens. Her youth was spent helping her father's work on behalf of the Socialist Party. She became a fierce activist in her own right, delivering speeches advocating for laborers in the mining industry of western Arkansas."

◼️ Home Demonstration Rural Women's Annual Encampment, North Little Rock. "Constance Josephine (Connie) Bonslagel served as state home demonstration agent from 1917 until her death in 1950. Perhaps one of her most creative contributions was the rural women's annual encampment at Camp Joseph T. Robinson during the 1930s. It provided a few days' respite and education for 1,200 rural women, who boarded school buses, brought their own plates, and slept in army tents."