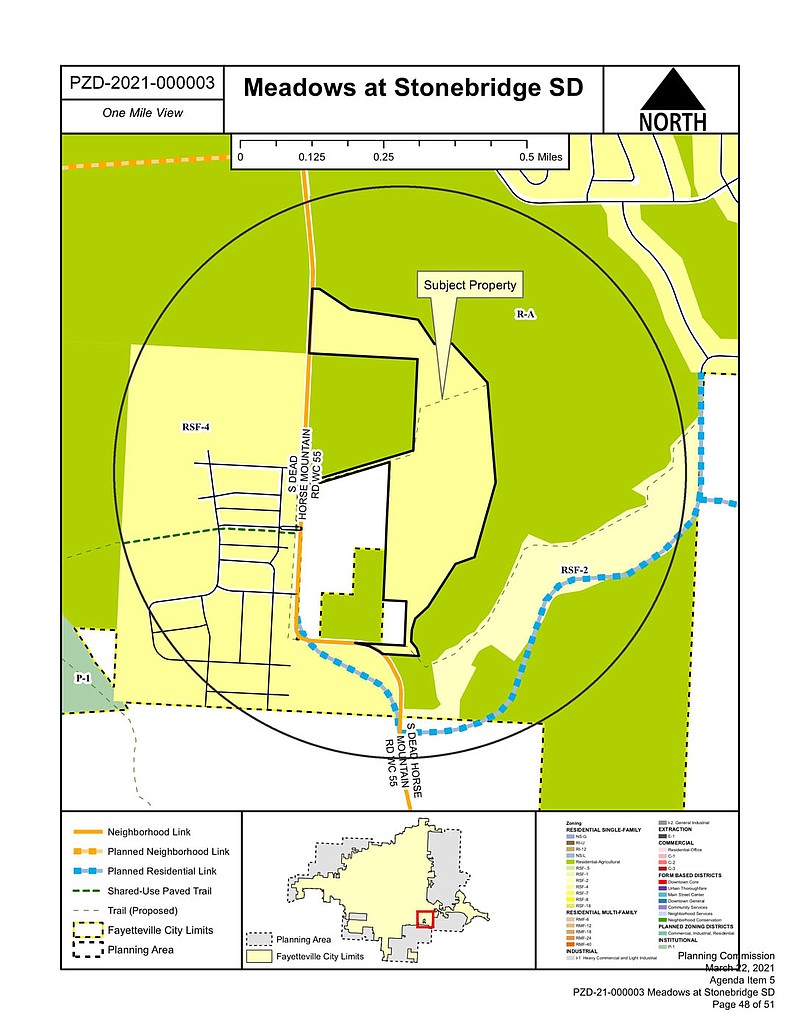 A map shows the proposed location of Meadows at Stonebridge subdivision east of Dead Horse Mountain Road in south Fayetteville. The city's Planning Commission on Monday approved a zoning plan for the project, which includes 168 residential lots and one lot with a potential mix of commercial and residential uses. (Courtesy/City of Fayetteville)

FAYETTEVILLE -- The Planning Commission on Monday narrowly approved a zoning plan associated with a subdivision near the southeastern city limit.

Commissioners voted 5-3 to approve a planned zoning district for the proposed Meadows at Stonebridge subdivision on about 51 ares east of Dead Horse Mountain Road, south of Huntsville Road. The subdivision plan includes 168 residential lots with one lot that could have commercial uses or a mix of residential and commercial uses.

The land lies immediately southwest of Stonebridge Meadows Golf Club. About 5 acres lining the property's western edge would be allowed to have small-scale commercial uses such as cafes or home occupations. Any residential uses on the acreage would have to be accompanied by commercial uses.

The rest of the site largely would be allowed to have residential uses ranging from single-family homes possibly to duplexes, triplexes or quadplexes. A type of neighborhood center gathering area is proposed in the middle of the site.

Lots are sized differently throughout the site to provide for a variety of housing types. Some have build-to zones, rather than uniformly having homes set back far from the street. A connection to St. Paul Trail on the west side of Dead Horse Mountain Road also is proposed.

Taylor Johnson, employee at the golf club, spoke to the commission via the meeting's online format on Zoom and expressed concerns with the development potentially exacerbating flooding at the course. He also worried of errant golf balls possibly damaging property of the incoming neighbors.

"There's no school, grocery store, parks -- there's nothing really in that area," he said.

"It definitely could be better, I'm not going to argue that," he said. "But when comparing it what currently exists, and what we're likely to get, to me this is sort of a no-brainer."

The City Council will have final say on the decision.

In other business, the commission held off on making a decision about a number of changes to the city's tree preservation requirements for residential development. The changes were endorsed by the city's resident-led panels on environmental action and urban forestry.

Among changes, trees would be grouped as high or low priority, rather than high, medium or low priority. It also defines the size of a tree preservation requirement. A redundancy in city standards to have tree pruners be certified would be waived. Developers also be allowed to delay planting trees for optimal weather. A provision allowing off-site tree preservation outside the city also would be waived. The changes also propose allowing developers of small residential projects that do not have space for trees to opt for a green roof or green facade instead.

Hoffman asked the item be held so local developers could have more time to review the changes. A majority of commissioners expressed support for the changes during the meeting.

Monday's meeting was the last for Hoffman and Brown. Both served six years and have met term limits, per the city's rules. The City Council earlier this month affirmed Sarah Sparkman and Michael John Wiederkehr as new commissioners.

• A permit for a 150-foot cellphone tower from Verizon to be built south of Holt Middle School.

• A permit for a salon to move into the former fire station and Fleet Feet building on Harold Street, east of North College Avenue.