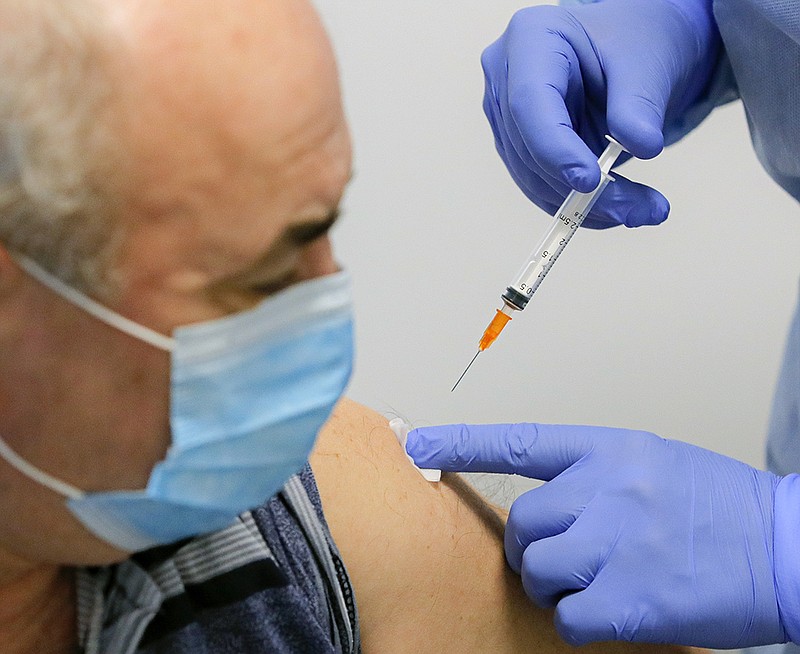 A man gets a AstraZeneca vaccine at a vaccination center that offers both AstraZeneca and Pfizer vaccines in Bucharest, Romania, Tuesday, March 23, 2021. AstraZeneca's repeated missteps in reporting vaccine data coupled with a blood clot scare could do lasting damage to the credibility of a shot that is the linchpin in the global strategy to stop the coronavirus pandemic, potentially even undermining vaccine confidence more broadly, experts say.(AP Photo/Vadim Ghirda)

Federal health officials and an independent oversight board late Monday accused AstraZeneca of presenting the world with potentially misleading information about the effectiveness of the company's covid-19 vaccine, a blow to the credibility of a company whose product has been seen as critical to the global fight against the pandemic.

Hours after AstraZeneca announced encouraging news about the effectiveness of its covid-19 vaccine Monday, a group of medical experts in charge of monitoring the company's clinical trial said AstraZeneca had essentially cherry-picked data to make its vaccine look better.

The accusation, in a two-page letter sent late Monday to the company and federal officials, was a fresh blow to the credibility of a vaccine whose low price and relatively easy storage have made it critical to the global fight against the coronavirus pandemic.

The private letter, which was described by people who have read it, castigated AstraZeneca for jeopardizing the integrity of a closely watched clinical trial.

"Decisions like this are what erode public trust in the scientific process," the oversight board wrote.

[Video not showing up above? Click here to watch » https://www.youtube.com/watch?v=0YINsN3o5LM]

The letter prompted the National Institute of Allergy and Infectious Diseases to issue a sharply worded statement Tuesday disclosing the panel's concerns.

The fight is about the degree of effectiveness of a vaccine that is undisputably effective.

While AstraZeneca said Monday that its vaccine appeared to be 79% effective at preventing covid-19, the panel of independent experts said the actual number may have been between 69% and 74%. The mass availability of a vaccine with even a 69% efficacy rate could help the world conquer the coronavirus.

But the public airing of a conflict between a pharmaceutical company and a board overseeing a clinical trial is almost unheard-of. It is certain to trigger extra scrutiny of the vaccine by the Food and Drug Administration and other regulators if, as expected, AstraZeneca seeks their authorization to use it on an emergency basis in the United States.

Repeated problems with the data presented by AstraZeneca have shattered the confidence of U.S. regulators and threaten to cast a worldwide cloud over the company's vaccine.

Dr. Anthony Fauci, director of the National Institute of Allergy and Infectious Diseases, said in an interview that he was "shocked" by the letter and the serious concerns it brought to light. On Monday, before receiving news of the letter, Fauci had said "numbers don't lie" and that the vaccine appeared to be effective.

The results from the U.S. trial Monday -- providing the cleanest, most complete picture of the vaccine's efficacy -- seemed to validate the vaccine and made it look more effective than in earlier trials.

In short, it bolstered the credibility of the vaccine, one that has been authorized for use in more than 70 countries. But the overnight announcement from the institute immediately raised a new set of questions about it and AstraZeneca.

"If they keep making these unforced errors, then that's going to derail confidence, and that will really affect our ability to combat this pandemic," said Dr. Peter Hotez, a vaccine expert at Baylor College of Medicine.

At issue is whether to count, in the public release of data, more recently confirmed cases of covid-19 among participants. The oversight board pushed AstraZeneca representatives last week to go through a backlog of potential cases and classify whether they were or were not covid-19. That had the potential to affect the vaccine's effectiveness rate, for better or worse.

The requested analysis showed that the vaccine was between 69% and 74% effective, according to the oversight board's letter.

But when AstraZeneca unveiled its interim results Monday, the company did not count those newly classified covid-19 cases. As a result, it reported that the vaccine appeared to be 79% effective at preventing the disease.

Until they received the monitoring board's letter, AstraZeneca executives weren't aware that the panel expected them to include the updated figures in their news release, according to a person familiar with the executives' thinking.

Federal officials, however, were stunned to discover Monday that AstraZeneca had released those results even though the monitoring board had spent days pushing for -- and eventually received -- updated data. By then, Fauci had publicly hailed the results at a White House briefing, and the company had been showered with positive media coverage.

AstraZeneca on Tuesday defended its actions, saying the interim results appeared to be "consistent" with more recent data collected during the trial. The company said it would immediately share its latest data with the monitoring board and reissue fuller results within 48 hours.

The AstraZeneca vaccine is cheaper and easier to store than many of its rivals' and thus is expected to be widely used in the developing world. International health agencies have repeatedly said the vaccine is safe and effective, but it's not the first time the company has run into problems with public trust.

Partial results from its first major trial -- which Britain used to authorize the vaccine -- were clouded by a manufacturing mistake that researchers didn't immediately acknowledge.

Insufficient data about how well the vaccine protected older people led some countries to initially restrict its use to younger populations before reversing course. U.S. officials suspended an AstraZeneca study for an unusual six weeks while they sought details about problems reported in Britain before deciding the vaccine wasn't to blame.

Meanwhile, the European Union has complained about delays in vaccine deliveries from the company.

Then last week, more than a dozen countries temporarily halted their use of the AstraZeneca vaccine after reports of rare blood clots in some people who received it. The European Medicines Agency concluded that the vaccine did not increase the overall incidence of clots, but the unwanted attention appears to have left a mark.

In Norway, a top official warned Monday that it might not be able to resume its use of the vaccine because so many people were rejecting it.

"People clearly say that they do not want the AstraZeneca vaccine," Marte Kvittum Tangen, who heads a Norwegian doctors' association, told broadcaster NRK.

Last week in Bucharest, Romania, vaccination coordinator Valeriu Gheorghita said 33,000 AstraZeneca immunization appointments had been canceled in 24 hours and that about a third of the 10,000 people scheduled to receive the vaccine did not show up. In Belgrade, Serbia, a sprawling exhibition center set up for people to get the AstraZeneca vaccine was mostly deserted Monday.

"This is unfortunately more about perception than it is the science," said Dr. Bharat Pankhania, an infectious diseases specialist at Britain's University of Exeter.

"We have now seen, on several parameters, that the AstraZeneca vaccine provides protection and is safe," he said. "But the narrative for the public has not been as clear."

AstraZeneca's relationship with U.S. authorities has been fraught almost since it began its clinical trial here last summer. Senior health officials complained that the company was not being forthright about the design of its clinical trials, its results and safety issues.

Last week, an apparent delay in the release of the vaccine's interim trial results raised fresh suspicions among federal officials.

In response to questions from The New York Times, an AstraZeneca spokesperson, whom the company refused to name, said Friday that any back and forth between the company and the monitoring board was simply run-of-the-mill dialogue.

"As is often the case," she said, monitoring boards "can request new or clarifying analyses of data from the trial. This would enable them to ensure the robustness of their determinations."

With more than 32,000 participants, the U.S. trial, which received funding from the National Institutes of Health, was the largest test of its kind for the shot. The results that AstraZeneca released Monday reflected an interim look at the data after 141 covid-19 cases turned up among volunteers, one-third of whom had received a saline placebo. That was enough cases to evaluate whether the vaccine was effective at preventing the disease.

The implications of the trial extend beyond the United States, which has ordered 300 million doses of the vaccine.

AstraZeneca's application for emergency authorization may take more time to review than those from the companies that have already won clearance.

Separately, Pfizer Inc. said it has begun human safety testing of a new pill to treat the coronavirus that could be used at the first sign of illness.

If it succeeds in trials, the pill could be prescribed early in an infection to block viral replication before patients get very sick. The drug binds to an enzyme called a protease to keep the virus from replicating. Protease-inhibiting medicines have been successful in treating other types of viruses, include HIV and hepatitis-C.

"Given the way that SARS-CoV-2 is mutating and the continued global impact of covid-19, it appears likely that it will be critical to have access to therapeutic options both now and beyond the pandemic," said Mikael Dolsten, Pfizer's chief scientific officer, in a statement.

In an interview, Dolsten said no unexpected problems had been seen in the study so far and that it could generate results within weeks.

The new protease inhibitor is the second such medicine Pfizer has taken into human trials. Pfizer is testing another given intravenously to hospitalized virus patients.

If everything continues to go well, Pfizer could begin a much larger combined Phase 2-Phase 3 trial early in the second quarter, Dolsten said, potentially allowing it to apply for emergency-use authorization from the FDA by the end of this year, depending on how the pandemic evolves.

The drug is likely to be given twice a day for about five days, he said.

"This is really a potential game changer," Dolsten said.