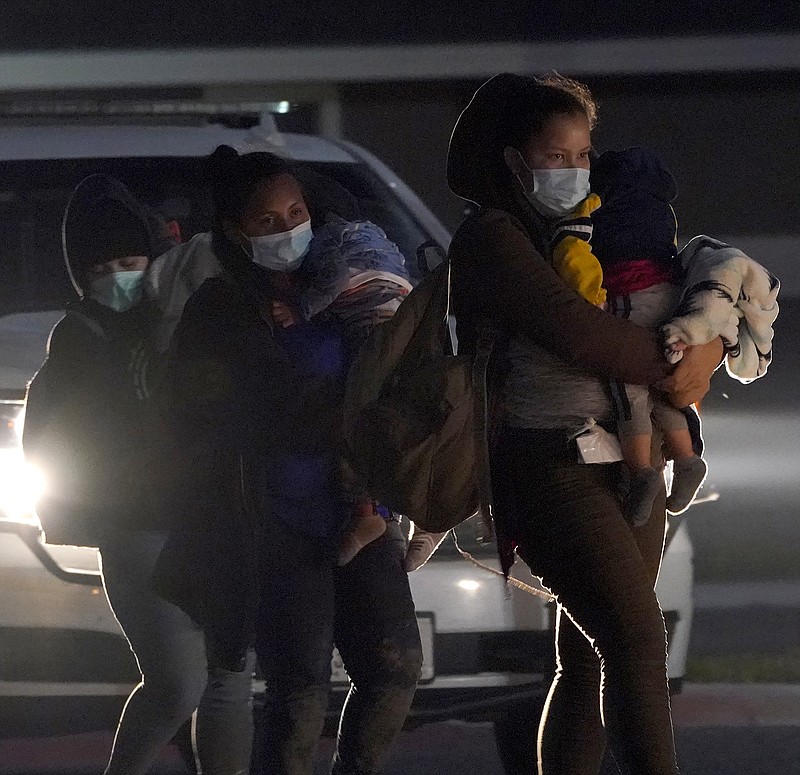 WASHINGTON -- President Joe Biden on Wednesday tapped Vice President Kamala Harris to oversee efforts to slow the rush of migrants to the southern border, handing her a high-profile and politically fraught assignment as fresh concerns arise from lawmakers and activists about the growing problem.

The move was made on the same day a delegation of senior White House officials and members of Congress visited a facility in Carrizo Springs, Texas, where migrant children are being held. The Biden administration is seeking urgently to process, shelter and care for thousands of young children and teenagers arriving at the border without their parents.

Biden called Harris "the most qualified person" to lead the U.S. dialogue with Mexico and Central American countries "that are going to need help in stemming the movement of so many folks."

"It's not her full-responsibility job, but she is leading the effort because I think the best thing to do is to put someone who, when he or she speaks, they don't have to wonder about, is that where the president is," Biden said. "When she speaks, she speaks for me."

The decision puts Harris in charge of one of the toughest problems facing the Biden administration, involving an issue that has vexed the past few presidencies. Harris until now lacked a specific portfolio, though Biden had said he wanted to put her in charge of pressing issues as they arose, a role he played for former President Barack Obama.

[Video not showing up above? Click here to watch » https://www.youtube.com/watch?v=O4OiYESPmMo]

Appearing with Biden on Wednesday, Harris echoed Biden's increasingly tough warnings to would-be migrants, and pledged to tackle the underlying economic and social conditions that are driving people to flee their home countries.

"While we are clear that people should not come to the border now, we also understand that we will enforce the law and that we also -- because we can chew gum and walk at the same time -- must address the root causes that cause people to make the trek," Harris said.

For Biden, who oversaw similar immigration issues for Obama, the decision effectively creates a point person for dealing with the flow of migrants as he addresses other priorities, such as the coronavirus pandemic and the economy.

As one senior administration official put it, "Starting today, the Northern Triangle nations and Mexico will know there is one senior official dedicated to this effort."

The official spoke on condition of anonymity to preview the move before Biden announced it.

Harris will have two overarching goals in her new role, according to senior administration officials: She will be working to stem the flow of migrants, and she will seek to establish a strategic partnership with Mexico, El Salvador, Guatemala and Honduras. The latter three are often called the Northern Triangle countries.

Republicans like Arizona Gov. Doug Ducey wasted little time questioning Harris' qualifications for the task and highlighting some of the liberal stances she took when she ran for president. "At no point in her career has she given any indication that she considers the border a problem or a serious threat," Ducey said.

But on Wednesday, much of the attention was on the Biden administration's struggles to house and quickly process unaccompanied migrant children arriving at the border, as well as complaints that the administration is not being transparent about the border situation.

Responding to bipartisan calls from lawmakers to give the media more access to border facilities, the Department of Health and Human Services allowed one network camera to accompany the White House-led delegation on a visit to a facility in Carrizo Springs, where migrant children are being held.

The delegation included Julissa Reynoso, who serves as chief of staff to first lady Jill Biden; Angela Ramirez, Biden's legislative liaison with the U.S. House; Cindy Huang, director of the Office of Refugee Resettlement under the Department of Health and Human Services; and Tyler Moran, a top Biden immigration adviser.

The group included several members of Congress. Among them was Rep. Henry Cuellar, D-Texas, who has been a vocal critic of the administration and has urged officials to consult local officials like him more often.

On Monday, Cuellar released photos that he had received from inside a temporary border tent in Donna, Texas, that was operating well beyond capacity. The photos showed children placed in crowded areas divided by clear partitions, some huddled under foil blankets on modest bedding.

The White House delegation did not visit that facility, which is run by U.S. Customs and Border Protection, a law enforcement agency. The facility in Carrizo Springs is run by the Health and Human Services Department. Some Democratic lawmakers who were asked to join the delegation declined the administration's invitation, according to people familiar with the planning.

While acknowledging a "big problem" with the rising numbers of migrants, Rep. Norma Torres, D-Calif., one of the lawmakers to tour the Carrizo Springs facility Wednesday, credited the Biden administration with treating young migrants far more humanely than the Trump administration.

In an interview after the tour, Torres described children placed four to a room and said she saw no signs of overcrowding. The young people attend school, have access to health care and are given weekly covid-19 tests. Lawmakers were told that one in 10 children are testing positive for the virus, but none at the facility had been hospitalized, she said.

"When I look at those kids, I see myself," said Torres, an immigrant from Guatemala who arrived in the U.S. with her family as a child.

The White House faced criticism for limiting media access to Wednesday's tour, keeping it to just one TV crew. It has still not allowed the media to enter Border Patrol facilities where large numbers of children are detained or Health and Human Services sites that it rapidly opened under pressure. The Carrizo Springs facility was established in 2019 during the Trump administration and reopened in February.

Republican Sen. Ted Cruz of Texas, who is leading a separate delegation of GOP senators to the border later this week, decried the lack of press access as a "muzzling" of the media by the Democratic administration.

"Joe Biden doesn't want you to see," Cruz told reporters at the Capitol.

White House press secretary Jen Psaki said the administration is open to allowing reporters into other facilities. "This is just the first step in a process of providing greater access to the media," she said.

Rep. Filemon Vela, D-Texas -- who, like Cuellar, represents a district that touches the border -- called on the White House to reconsider its decision to allow all unaccompanied children into the United States.

"One logical approach to this situation would be to return the older teenagers to their home country and provide funding for an effort supervised by the United Nations to properly care for those teenagers upon their return," Vela said in a statement.

"Then, once the pandemic is under control, you could phase the program back in so that there would be some semblance of control over the process," he added.

There are more than 16,000 unaccompanied migrant children in the custody of Health and Human Services and Customs and Border Protection, nearly twice the previous record, according to the latest figures released by the government. Under pressure to be more transparent, officials provided fresh data Wednesday.

Wednesday's White House delegation visit took place as swelling numbers of Mexicans head north across the border, propelled by an economic crash and drawn by promises of a stimulus-fueled resurgence in the U.S.

Since the middle of last year, the number of monthly apprehensions at the southern border of working-age Mexicans traveling without children has more than doubled to around 40,000, from fewer than 16,000 during the previous two years, in part because of repeat attempts, according to the Customs and Border Protection agency. If the rate keeps up, 2021 could see the most Mexican apprehensions in a decade.

Most Mexicans caught at the border are adults traveling without children, and the number of repeated attempts at crossing is up sharply from previous years. That's largely because of a U.S. policy of sending people back to Mexico in hours instead of formally deporting them.

While a precise count of people crossing without authorization is impossible, data suggests that migration is on the rise, said Luis Calva, an expert at the Colegio de la Frontera Norte in Tijuana. "It may accelerate due to the economic crisis in Mexico if the demand for employment in the U.S. also increases," he said.

Information for this article was contributed by Sean Sullivan, Jacqueline Alemany, Silvia Foster-Frau and Ashley Parker of The Washington Post; by Jonathan Lemire, Nomaan Merchant, Lisa Mascaro, Aamer Madhani and Josh Boak of The Associated Press; and by Michael O'Boyle and Maya Averbuch of Bloomberg News (TNS). 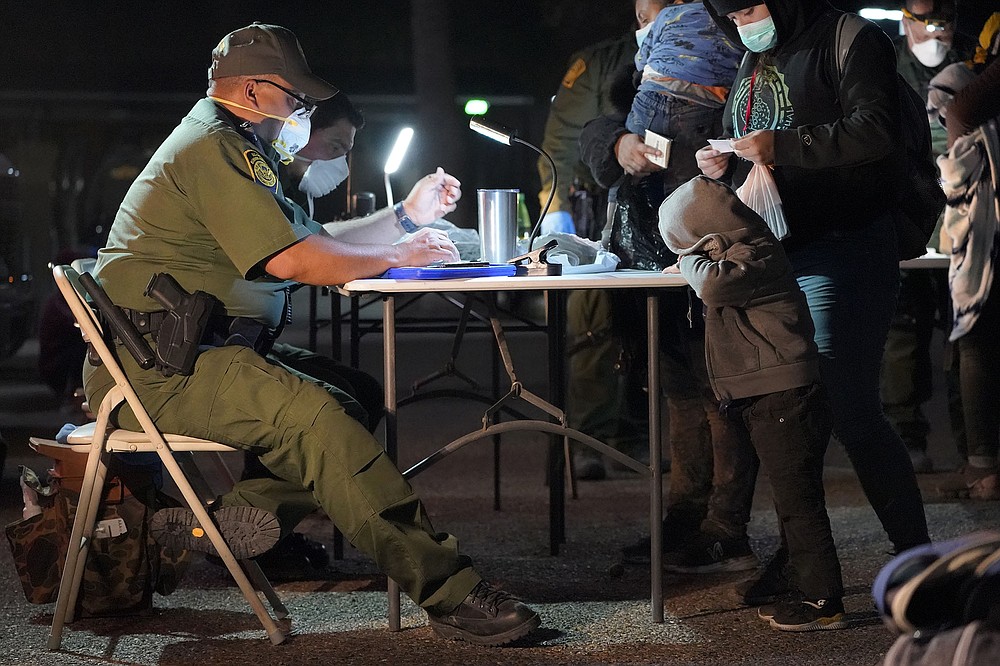 A U.S. Customs and Border Protection officer processes migrants who just crossed over from Mexico early Wednesday in Roma, Texas. Calls are growing for the Biden administration to offer more transparency on the border situation as it struggles to house and quickly process unaccompanied migrant children. (AP/Julio Cortez) 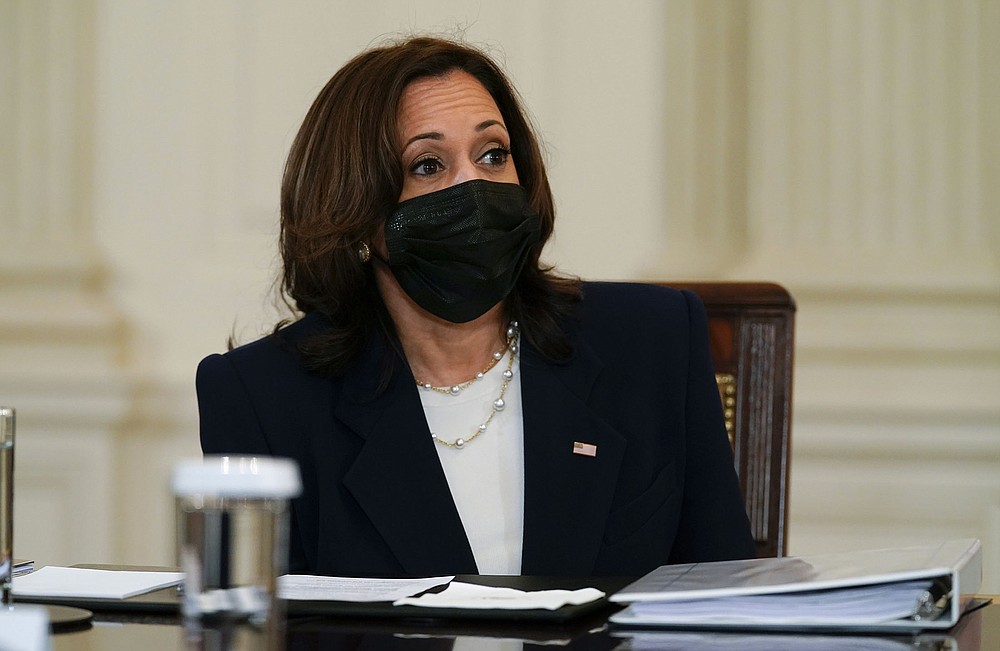 Vice President Kamala Harris attends a White House meeting on immigration efforts Wednesday. Harris, who will lead efforts to deal with the growing problem, said: “While we are clear that people should not come to the border now, we also understand that we will enforce the law and that we also — because we can chew gum and walk at the same time — must address the root causes that cause people to make the trek.” (AP/Evan Vucci)
ADVERTISEMENT