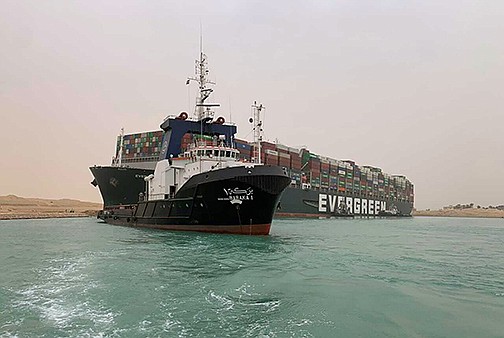 On Tuesday morning, the Ever Given sailed into the placid waters of the Suez Canal, the 120-mile-long link on its journey from the Red Sea to the Mediterranean, as it carried thousands of tons of cargo bound for the Netherlands.

Then a dust storm hit, limiting visibility and battering ships with heavy winds, according to the Suez Canal Authority. By midmorning, the massive ship -- one of the largest in the world at more than 1,300 feet long, which is more than twice the height of the Washington Monument -- was wedged sideways across the canal.

Dozens of boats piled up into a marine traffic jam on the crucial shipping lane as tugboats and diggers tried to free the vessel.

"Ship in front of us ran aground while going through the canal and is now stuck sideways," Julianne Cona, an engineer on the Maersk Denver, wrote on an Instagram post showing her ship stuck behind the Ever Given. "Looks like we might be here for a little bit."

By Wednesday morning, more than 100 ships were stuck at each end of the 120-mile canal, which connects the Red Sea to the Mediterranean and carries roughly 10% of worldwide shipping traffic. Only the Panama Canal looms as large in the global passage of goods.

"The Suez Canal is the choke point," said Capt. John Konrad, founder of the shipping news website gCaptain.com, noting that 90% of the world's goods are transported on ships. It "could not happen in a worse place, and the timing's pretty bad, too."

Wednesday morning, the ship was "partially refloated" and moved along the banks of the canal, according to an update sent to The Washington Post by Gulf Agency Co., a port agent that cited sources with the Suez Canal Authority.

The vessel was towed to another position and traffic in the canal was expected to be back to normal soon, Gulf Agency Co. said in a statement.

The Ever Given, which is operated by the Taiwanese firm Evergreen Marine and flagged in Panama, belongs to a modern class of massive cargo ships and can carry up to 220,000 tons of containers. In 2015, the Suez Canal underwent an $8.5 billion expansion to accommodate the ships and to set up two-way traffic headed both north and south -- but its owners never envisioned one of those mega-ships blocking the whole route, experts said.

"The Egyptian government certainly did not expect the route to be blocked both ways by a single ship," said Flavio Macau, a supply chain management expert at Edith Cowan University in Australia, in an interview with The Washington Post. "You can call it ... karma, bad luck or a lack of engineering oversight."

Either way, that's what happened Tuesday morning after the Ever Given left Suez, Egypt, south of the canal, and headed north, according to Gulf Agency Co.

About 7:40 a.m. local time, it ran aground. According to the Suez Canal Authority, the dust storm knocked out power to the ship before it ran aground.

"The container accidentally ran aground after a suspected gust of wind hit it," Evergreen Marine told Agence France-Presse. "The company has urged the ship owner to report the cause of the incident and has been in discussions with relevant parties including the canal management authority to assist the ship as soon as possible."

The accident quickly led to a backup in the busy canal -- and nearly some other accidents, according to Cona.

"Right after they ran aground the ship behind us lost power and almost hit us," she wrote on Instagram.

It was quickly clear that getting the Ever Given back on track would be a mammoth operation. Photos and satellite maps showed its bow along the canal's eastern boundary, while its stern nearly touched the western edge.

"From the looks of it that ship is super stuck," Cona wrote on Instagram.

Tugboats scrambled to try to "refloat the vessel," according to Leth Agencies, which offers services to ships transiting the canal.

By Wednesday morning, efforts finally had succeeded in dislodging the ship from the banks, Gulf Agency Co. said, and tugs were working to get it back on its way.

Global shipping companies rely on the Suez Canal to move millions of tons of cargo and oil every day on the shortest route between Asia and Europe.

Macau said that a delay of a day or two in the canal wouldn't noticeably affect global shipping.

"Most ships waiting to cross the canal at this time are tankers. Oil stocks are high across the globe and should be fine," he said. "This is not the Canal's busiest time of the year. Autumn and summer in the Northern Hemisphere would be more problematic."

The Suez Canal, first opened in 1869, is a major source of cash for Egypt, bringing in about $5.6 billion in revenue to Cairo's coffers in 2020.

Information for this article was contributed by Sudarsan Raghavan of The Washington Post; by Vivian Yee and Peter S. Goodman of The New York Times; and by Nabih Bulos of Los Angeles Times (TNS).