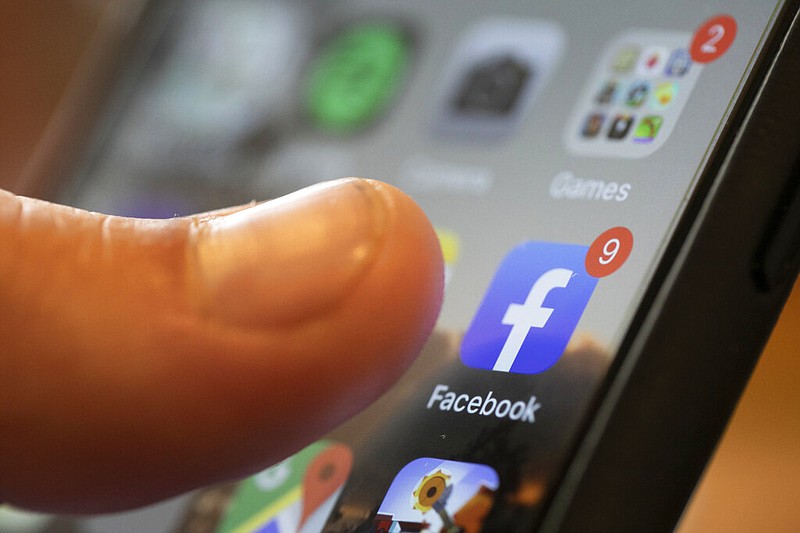 An iPhone displays the Facebook app in New Orleans in this Aug. 11, 2019, file photo. (AP/Jenny Kane)

Facebook, which in 2019 paid advertisers a $40 million settlement over inflated video-viewing metrics and is fighting a lawsuit over its "reach" to users, is now taking flak over its revelation this week that it took down 1.3 billion fake accounts during just three months last year.

Carusone noted that U.S. taxpayers bankroll ads on Facebook through government agencies including the Health and Human Services Department and the Census Bureau. Advertising analysis firm Pathmatics reported that the Census Bureau in the first six months of last year put more than $51 million, or 61% of its digital-advertising budget, into Facebook. Neither of the federal agencies immediately answered questions about the fake-accounts issue.

Facebook is facing intense scrutiny in Congress over its digital-advertising dominance and was sued by the Federal Trade Commission late last year in an antitrust action. The firm has been in hot water before over the numbers it puts out for users and user activity -- metrics advertisers rely on to guide spending. In 2019, without admitting wrongdoing, it paid the $40 million settlement after advertisers accused it of inflating the amount of time consumers spent viewing posted video ads by up to 900%.

According to market-research firm eMarketer, Facebook is on track this year to earn nearly $100 billion in digital-ad revenue and controls almost 25% of the global digital-advertising market.

The company is still in federal court in San Francisco battling a 2018 class-action lawsuit accusing it of overstating to advertisers the number of people their ads could reach, despite senior executives allegedly knowing for years about the exaggeration and a manager describing the issue in an internal communication as "a lawsuit waiting to happen." Facebook has described the lawsuit as without merit.

The Menlo Park, Calif., social media titan this week touted the disabling of the 1.3 billion accounts.

"We take a hard line against this activity and block millions of fake accounts each day, most of them at the time of creation," the company said in a news release that noted the company is under congressional investigation over online misinformation. "Tackling misinformation actually requires addressing several challenges including fake accounts, deceptive behavior, and misleading and harmful content," the firm said.

What the news release didn't include, and what Facebook does not reveal, are how many fake accounts were not caught at the time of creation, how many were served ads, and to what extent fake accounts may be included in the company's user numbers, such as the 2.8 billion "monthly active users" it claimed for 2020, Carusone noted.

Facebook's "Community Standards" ban multiple personal accounts and misrepresented identities, and if advertisers have been deceived, they should receive refunds, Carusone said.

"When you're an advertiser, the guarantee that Facebook is inferring at minimum is, 'Hey we will not allow our platform to be consumed by artificial accounts,'" Carusone said.

"Their countermeasures are not strong," Carusone said.

Facebook in 2019 sued four affiliated Chinese companies and three individuals from China, alleging they worked together to sell fake Facebook accounts, but so far Facebook has been able to serve the lawsuit on only one of the companies, which did not respond further to the legal action.