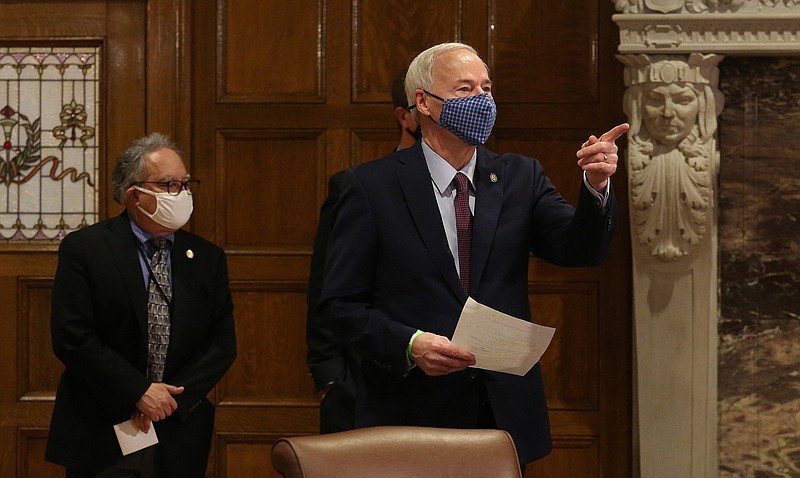 Gov. Asa Hutchinson enters the room before a press conference updating the legislative session and the weekly Covid-19 update on Tuesday, March 23, 2021, at the state Capitol in Little Rock. .(Arkansas Democrat-Gazette/Thomas Metthe)

The state House of Representatives on Tuesday declined to override Gov. Asa Hutchinson's veto of a bill that would have required state agencies to return fines paid by businesses for coronavirus-related violations during the state's public health emergency.

Back up: What were the fines for?

The fines were for failing to comply with a rule, order or directive to mitigate or prevent the spread of coronavirus.

Senate Bill 301 would have required the Alcoholic Beverage Control Division to return $69,560 in fines paid by businesses, a spokesman for the state Department of Finance and Administration said.

The state Department of Health would have been required to return a total of $4,100 in fines paid by businesses, a spokeswoman for the department said Tuesday.

Why did legislators write a bill to get the fines returned?

He said if the state is going to fine or punish someone, “it should by the consent of the governed through their representative form of government.”

Rep. Brandt Smith, R-Jonesboro, said the bill also intended to stand up for small-business owners who he believes were the most affected by the fines.

How many legislators initially passed the legislation?

The Senate passed the bill by a vote of 19-14, with one member excused and one member not voting.

The House passed the bill by a vote of 67-20, with seven members not voting and six voting present.

Why did the governor veto the bill?

Hutchinson also said in a letter to the General Assembly that the bill trying to return the fines represented “an infringement on the executive’s power to enforce the law.”

“If the rationale of [Senate Bill] 301 is accepted, then it is the equivalent to giving the General Assembly veto power over the executive branch in the faithful execution of the laws,” the Republican governor wrote. “The General Assembly defines the law and penalties, but the legislative branch is not constitutionally empowered to change after the fact how law enforcement is carried out.”

How did legislators vote on the attempt to override the veto?

The Senate voted 19-13 to override the governor’s veto. Two members did not vote and one was excused.

The House voted 39-40 this week, declining to override the veto. Nine representatives voted present and 12 did not vote.