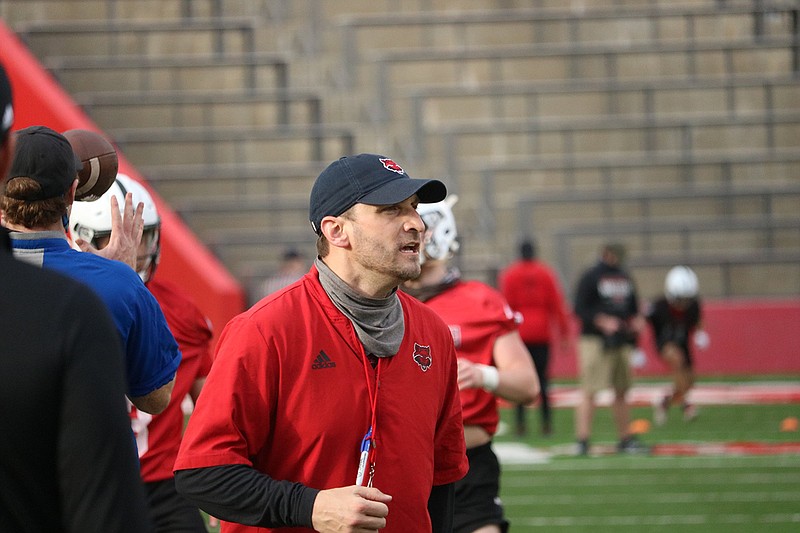 Arkansas State offensive coordinator Keith Heckendorf, shown during spring practice, enters his third season with the Red Wolves, but “I don’t see this as Year 3 at Arkansas State,” he said. “This is a chance to learn and grow, for me to get out of my comfort zone and to continue to expand my knowledge.” (Photo courtesy of Arkansas State University)

JONESBORO — His office hasn’t changed, nor has his commute to work.

Keith Heckendorf is operating ostensibly in the same role he’s held since 2019, but in his third offseason as the offensive coordinator at Arkansas State University, the 39-year-old feels like he’s starting over again.

“I don’t feel like I’m walking back into my old job,” Heckendorf said. “I feel like I’ve taken a new job, in a new program, at a new place. There’s just a lot of familiar faces and my family didn’t have to move.”

Heckendorf — who spent the previous two seasons working under head coach Blake Anderson — was retained by new ASU Coach Butch Jones on Jan. 9. He is one of two coaches from Anderson’s last staff still with the Red Wolves, joined by defensive line coach Brandon Joiner.

Since his December arrival, Jones has transformed the program, and Heckendorf is embracing the change. He views his third season at ASU as not only a new start but an opportunity to evolve.

“I don’t see this as Year 3 at Arkansas State,” Heckendorf said. “At the end of the day, we’ve all got the same goal of developing our players and winning ball games, but there’s a lot of different ways that gets done and to be part of a new coaching tree excites me.

“This is a chance to learn and grow, for me to get out of my comfort zone and to continue to expand my knowledge.”

Heckendorf’s retention was not straightforward.

Milwee’s stint with the Red Wolves lasted only 10 days before he was named the quarterbacks coach at Texas under former Crimson Tide offensive coordinator Steve Sarkisian. His departure opened the door for Heckendorf to remain in Jonesboro.

“In the world we live in, transition and change happens fast when it does,” Heckendorf said.

Jones asked his new players about Heckendorf during the individual meetings he held with a number of Red Wolves in the short period between his Dec. 12 hiring and their winter break. Those players told Jones about the coach who set high expectations and had a knack of simplifying the game.

They also said Heckendorf was receptive to ideas regarding play calling and game plans.

“People know what they’re going to get out of Coach Heck,” senior quarterback Layne Hatcher said. “He’s a guy who will bust his butt for you and he’ll take care of you. He’ll always have your back if you’re willing to work hard for him.”

The players were away from campus when Milwee made his exit, but when Jones made his second run at an offensive coordinator in January, the bond between the players and Heckendorf was a reason to bring him back into the fold.

“Every player I asked about Coach Heckendorf kind of lit up when they spoke about him,” Jones said. “I could sense the trust and belief that our players also had in him. I thought it was important that we have that trust.”

Heckendorf’s relief about remaining at ASU was followed by a thrill at joining a new staff under an experienced head coach such as Jones, who brings SEC experience, four conference titles and wisdom gained from three seasons spent under Alabama Coach Nick Saban.

Those differences will show in the offense Heckendorf is set to run in the fall, and he praised his players after the Red Wolves’ fifth spring practice March 18 for “adjusting and adapting” to the changes being thrown their way this spring.

ASU brings back Hatcher and five offensive starters from 2020, with holes left in the offense by the departures of second-team All-American wide receiver Jonathan Adams and leading rusher Jamal Jones.

Both Heckendorf and Jones have been mum on their plans for the ASU offense, but each has emphasized finding more ways to attack and keep opposing defenses off balance. Players this spring have spoken about the increased depth and versatility of the newly introduced schemes.

“The playbook has opened up way more,” junior wide receiver Jeff Foreman said. “There’s more schemes. More motions for us to get open. There’s a lot more learning and teaching.”

The Red Wolves’ offense has changed this offseason and so has Heckendorf’s job, even if he’s still parking in the same spot outside the north end zone facility.

“I want to keep looking at things differently and to continue to grow, evolve and adapt,” he said. “That gives you an edge, and it’s going to give our kids an edge when they step on the field on any given Saturday.”

Heckendorf returns to the Red Wolves for a third season as offensive coordinator after two years with former head coach Blake Anderson. Last fall, ASU’s Heckendorf-led offense finished No. 3 in the nation in touchdowns passes (39), No. 4 in passing yards (4,008) and No. 11 in total yardage (5,387). … He was named interim coach after Anderson’s departure in December and was later retained Coach Butch Jones in January.

Limegrover last served as an offensive line coach during four seasons at Penn State from 2016-19, when the Nittany Lions made four consecutive bowl game appearances and earned wins at the 2017 Fiesta Bowl and 2019 Cotton Bowl. … He was a member of the Northwestern coaching staff that earned back-to-back Big Ten titles in 1995-96. … Limegrover overlapped with ASU Coach Butch Jones at Ferris State in 1997.

The former ASU quarterback led the Red Wolves to consecutive Sun Belt Conference titles in 2011 and 2012 and remains the program’s all-time leader in career total offense (12,514 yards), completions (906) and passing yards (10,758)…Aplin spent the 2020 season as co-offensive coordinator and running backs coach at Western Kentucky and helped guide the Hilltoppers to an appearance in the 2020 LendingTree Bowl…He was twice named Sun Belt Conference Player of Year (2011, 2012) and graduated as the conference’s all-time leader in total offense, passing yards and completions.

Lett spent the past six years as wide receivers coach and recruiting coordinator at Yale, where the Bulldogs earned Ivy League Championships in 2017 and 2019. … He was a four-year letter winner at Bowling Green State and won a pair of bowl games with the Falcons from 2001-05. … Lett was a member of Jones’ inaugural staff at Tennessee in 2013.

Kwon worked as an assistant at Alabama alongside Jones from 2018-20 and was a member of the staff that led the Crimson Tide to a national championship in 2020. … He started 25 games at center for Georgia Southern. He earned all-Sun Belt honors in his junior and senior seasons. … Kwon was born in Seoul, South Korea, before starring at Gwinnett High School in Georgia.