Transgender bills called bad for state; effect on commerce raised as a fear 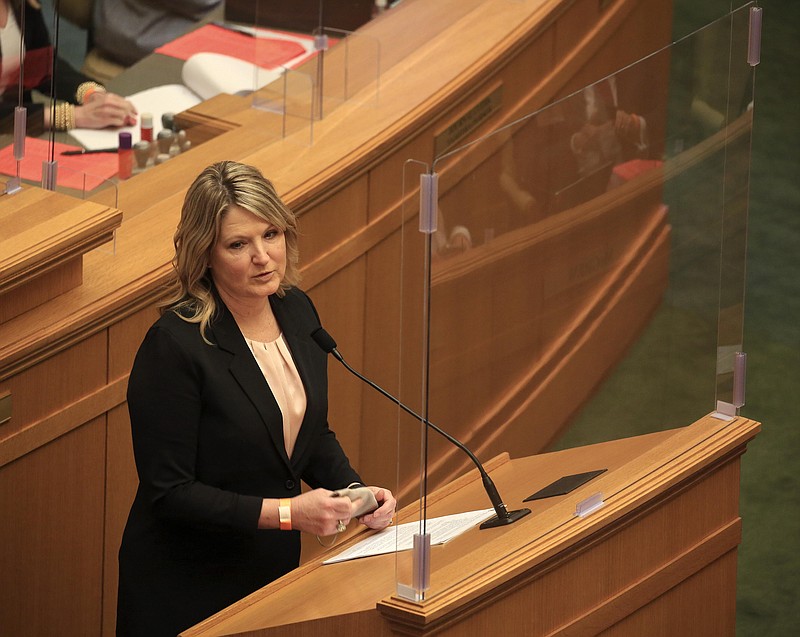 Passage of a bill that would ban transgender girls and women from participating in sports in accordance with their gender identities, and other bills affecting transgender youths would have devastating consequences on Arkansas, civil-rights advocates said Wednesday.

Officials from the Human Rights Campaign, leaders at the American Civil Liberties Union of Arkansas and advocates for transgender people in the Natural State urged Gov. Asa Hutchinson not to sign Senate Bill 354 and Senate Bill 289, a so-called medical right of conscience bill, which lawmakers have sent to his desk.

Those bills, along with House Bill 1570 -- which bans gender-affirming care, including surgery and hormone treatment, for minors -- would lead to discrimination against a segment of youths that already has higher-than-average suicide rates, and have a negatively impact on commerce in the state, they said.

"These anti-trans bills hurt my business and all small- and medium-sized businesses in the state by putting us at a competitive disadvantage, because diversity and inclusion are known to be good for business," Chris Attig, an Arkansas business owner and father of a transgender son, said at a virtual news conference Wednesday.

Randy Zook, president and CEO for the Arkansas State Chamber of Commerce and the Associated Industries of Arkansas, didn't respond to an email seeking the chamber's position on the bills by deadline Wednesday evening. The chamber opposed SB289 the first time it went before a House committee, but neither representatives for the organization, nor representatives for corporate giants based in Arkansas like Walmart or Tyson, have testified on SB354 or HB1570.

"I think that's important just to balance out this legislative session," Hutchinson said at a news conference Tuesday.

Senate Bill 3, which would establish harsher penalties from crimes committed against people based on their attributes, including gender identity or sexual orientation, has yet to advance from committee, more than 60 days into the session.

"Hate crimes legislation is closing the door on the barn after the horse has already left," Dickson said.

Hutchinson said Tuesday that he supports the intent of SB354 but is still studying the bill to ensure there aren't any "unintended consequences."

"That seems like a very worthwhile objective to attain. I certainly will want to listen to any concerns by others," Hutchinson said.

Proponents of SB354 say the goal is to establish fairness in girls' and women's sports, arguing that athletes assigned the male gender at birth have physiological advantages over girls and women, though they have acknowledged that there is no confirmed instance of a transgender girl or woman participating in school sports in Arkansas.

"It significantly gives our girls and our young women in sports what they deserve, which is a level playing field in athletic competition and in athletic advancements and opportunities," House sponsor Rep. Sonia Barker, R-Smackover, told the House Education Committee last week.

This year has been a "milestone" year for anti-transgender legislation, said Cathryn Oakley, state legislative director and senior counsel for the Human Rights Campaign. More than 95 bills across the country affect transgender people, and about half of those are bills curtailing transgender girls' and women's abilities to participate on sports teams consistent with their gender identities, according to the national LGBTQ civil rights organization.

Mississippi became the first state to pass legislation targeting transgender girls and women in sports earlier this month. Idaho passed a similar law in 2020, but the measure is blocked by a court ruling.

Lawmakers in North Dakota sent a transgender sports bill to Gov. Kristi Noem, who had previously expressed support but ultimately sent it back to the Legislature with recommendations to address broad language and possible unintended consequences.