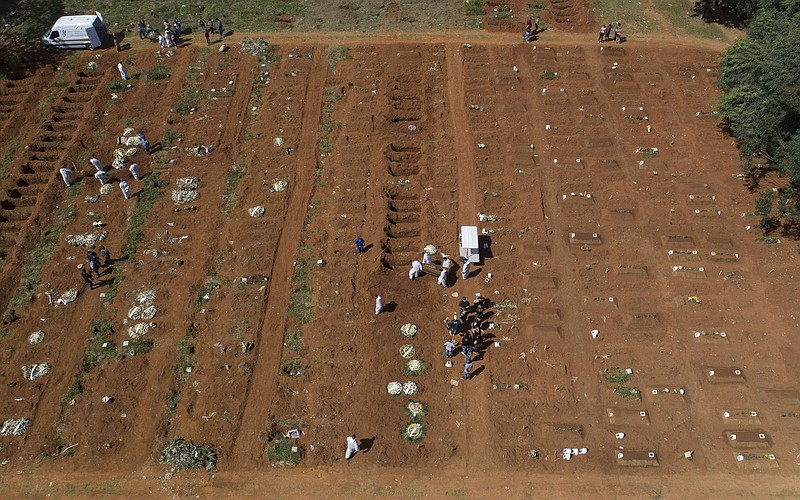 Cemetery workers bury a covid-19 victim Wednesday at the Vila Formosa cemetery in Sao Paulo. On Tuesday, for the first time, Brazil reported more than 3,000 covid-19 deaths in a single day. (AP/Andre Penner)

More than three months into the U.S. vaccination drive, many of the numbers paint an increasingly encouraging picture, with 70% of Americans 65 and older receiving at least one dose of a vaccine, and covid-19 deaths dipping below 1,000 a day on average for the first time since November.

Also, dozens of states have opened vaccinations to all adults or are planning to do so in a matter of weeks. And the White House said 27 million doses of both the one-shot and two-shot vaccines will be distributed next week, more than three times the number when President Joe Biden took office two months ago.

"I'm often asked, are we turning the corner?" Fauci said at a White House briefing. "My response is really more like we are at the corner. Whether or not we're going to be turning that corner still remains to be seen."

What's giving Fauci pause, he said, is that new cases remain at a stubbornly high level, at more than 50,000 per day.

Nonetheless, the outlook in the U.S. stands in stark contrast to the deteriorating situation in places like Brazil, which reported more than 3,000 covid-19 deaths in a single day for the first time Tuesday, and across Europe, where another wave of infections is leading to new lockdowns.

The gloom in Europe is compounded because the vaccine rollout on the continent has been slowed by production delays and questions about the safety and effectiveness of AstraZeneca's shot.

Public health experts in the U.S. are taking every opportunity to warn that relaxing social distancing and other preventive measures could easily lead to another surge.

"We're getting closer to the exit ramp," Topol said. "All we're doing by having reopenings is jeopardizing our shot to get, finally, for the first time in the American pandemic, containment of the virus."

[Video not showing up above? Click here to watch » https://www.youtube.com/watch?v=y_50XGpthC0]

Across the country are unmistakable signs of progress.

More than 43% of Americans 65 and older -- the most vulnerable age group, accounting for an outsize share of the nation's more than 540,000 coronavirus deaths -- have been fully vaccinated, according to the CDC. The number of older adults showing up in emergency rooms with covid-19 is down significantly. Vaccinations overall have ramped up to 2.5 million to 3 million shots per day.

"I emphasize how we need to hang in there for just a little while longer," Dr. Rochelle Walensky, director of the Centers for Disease Control and Prevention, said Wednesday. That's because "the early data are really encouraging."

Nationwide, new cases and the number of people hospitalized with covid-19 have plummeted over the past two months, though Walensky remains concerned that such progress seemed to stall in the past couple of weeks. New cases are running at more than 53,000 a day on average, down from a peak of a quarter-million in early January.

That's uncomfortably close to levels seen during the covid-19 wave of last summer.

Biden has pushed for states to make all adults eligible to be vaccinated by May 1. At least a half-dozen states, including Texas, Arizona and Georgia, are opening up vaccinations to everyone over 16. At least 20 other states have pledged to do so in the next few weeks.

The brighter outlook comes as the U.S. has injected more than a quarter of the world's coronavirus vaccine doses so far.

From the moment the FDA authorized the first vaccines by Pfizer and Moderna, the U.S. government, first under Donald Trump and then under Biden, had already arranged to buy all of the companies' known U.S. production for months to come, assuring hundreds of millions of doses for American arms.

Countries without their own capacity to manufacture vaccines have had to wait or turn to sources other than the U.S., including shots developed in Russia and China under less regulatory scrutiny.

Biden last week marked a milestone of 100 million shots administered under his presidency, six weeks ahead of schedule. The U.S. has now put nearly 130 million doses into arms, twice as many as the more-populous European Union.

The achievement is because of contracts that obligate manufacturers to fill U.S. government orders first, a de facto ban on vaccine exports despite Biden administration officials repeatedly saying there's no formal prohibition. In exchange, companies get crucial aid procuring supplies. The nationalist approach taken by Biden and Trump has been criticized by some allies and public health experts.

"It, depressingly, has gone pretty much exactly as predicted," said Thomas Bollyky, director of the global health program at the Council on Foreign Relations. "In every previous global health crisis where there has been a medical intervention that would make a difference, wealthy countries have hoarded it."

But other countries will soon benefit. The U.S. is on pace to inoculate most of its adult population by summer and is poised within months to become the biggest vaccine exporter in the world.

As production increases, domestic manufacturers may be able to soon fulfill their U.S. contracts while also making doses for other countries. The European Union is now drafting similar measures to curb exports to boost supply at home.

Separately, disposable masks, gloves and other types of personal protective equipment are creating a worldwide pollution problem, littering streets and sending an influx of harmful plastic and other waste into landfills, sewage systems and oceans.

In Northern California, environmental groups are tracking the issue along the coast -- and trying to do something about it.

The Pacific Beach Coalition recently noticed a dramatic increase in discarded personal protective equipment on beaches in and around the city of Pacifica, south of San Francisco, where it's been doing monthly cleanups for nearly 25 years.

Volunteers record what they pick up to gauge what might ends up in the ocean. Until 2020, the litter was mostly cigarette butts and food wrappers.

"What are we going to do? We got masks. We got gloves. We got all those hand wipes, the sani wipes. They're everywhere. They're in my neighborhood, in my streets. What can we do?" asked Lynn Adams, the coalition's president.

The group and others are calling attention to the issue, saying what's recorded is likely only a fraction of the personal protective equipment hitting beaches and oceans.

Larger mammals can ingest personal protective equipment, and plastic from the items can disrupt the ocean's food chains. "They're all made of plastic," Adams said.

A report last year by the advocacy group OceansAsia found that nearly 1.6 billion masks would flood oceans in 2020 alone, based on global production estimates and other factors. OceansAsia said masks could take as long as 450 years to break down.

The Marine Mammal Center, a conservation group that rescues and rehabilitates mammals, conducts research and provides education, said animals can get trapped in discarded personal protective equipment or mistake it for food.

"Obviously, PPE is critical right now, but we know that with increased amounts of plastic and a lot of this stuff getting out into the ocean, it can be a really big threat to marine mammals and all marine life," said the center's conservation educator, Adam Ratner.

One small thing Ratner suggests is cutting the loops before discarding a mask, which can help prevent animals from getting tangled in them.

Sophia Woehl was among people volunteering in the cleanup at a beach in Pacifica last week.

"We want to keep ourselves safe, but we also want to keep the rest of the environment safe, too, and we're not doing that right now with just leaving them on the ground," she said. 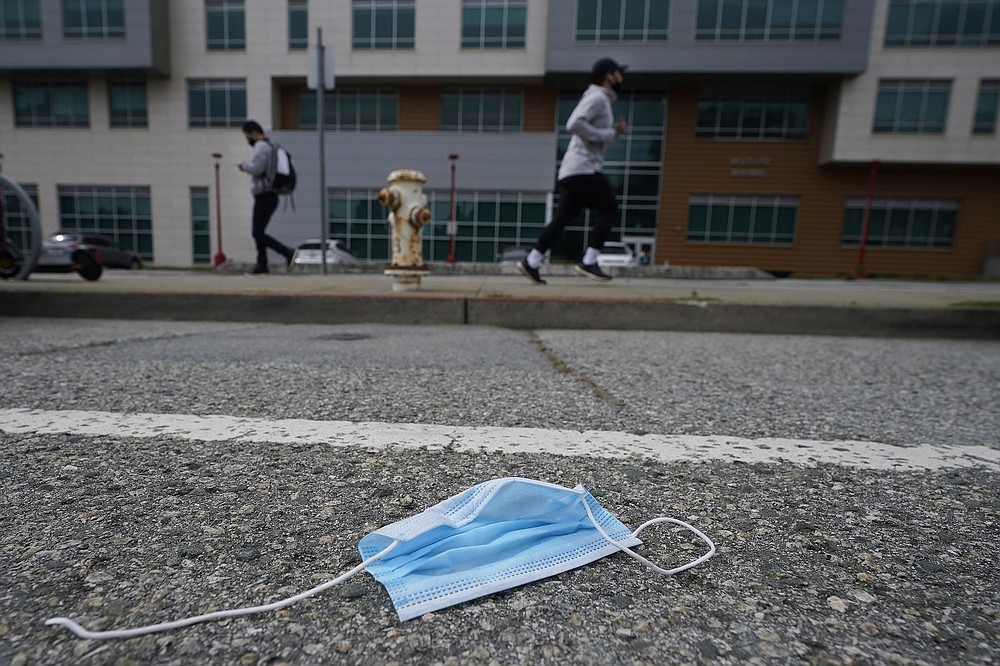 Discarded masks, like this one on a street Wednesday in San Francisco, and other used protective equipment are contributing to a worldwide environmental problem. (AP/Jeff Chiu) 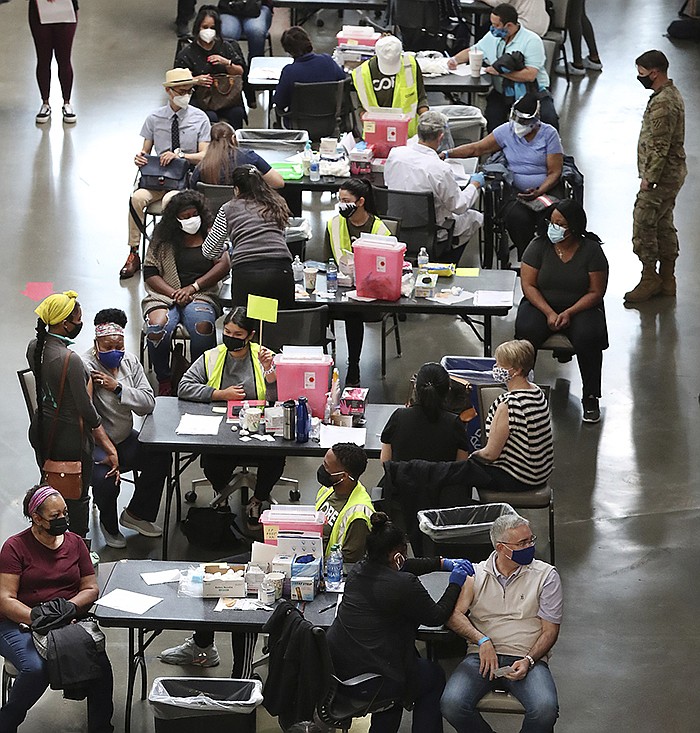 People get the Pfizer covid-19 vaccine Wednesday at Mercedes-Benz Stadium in Atlanta. Georgia is one of at least a half-dozen states opening up vaccinations to everyone over age 16. (AP/Atlanta Journal-Constitution/Curtis Compton) 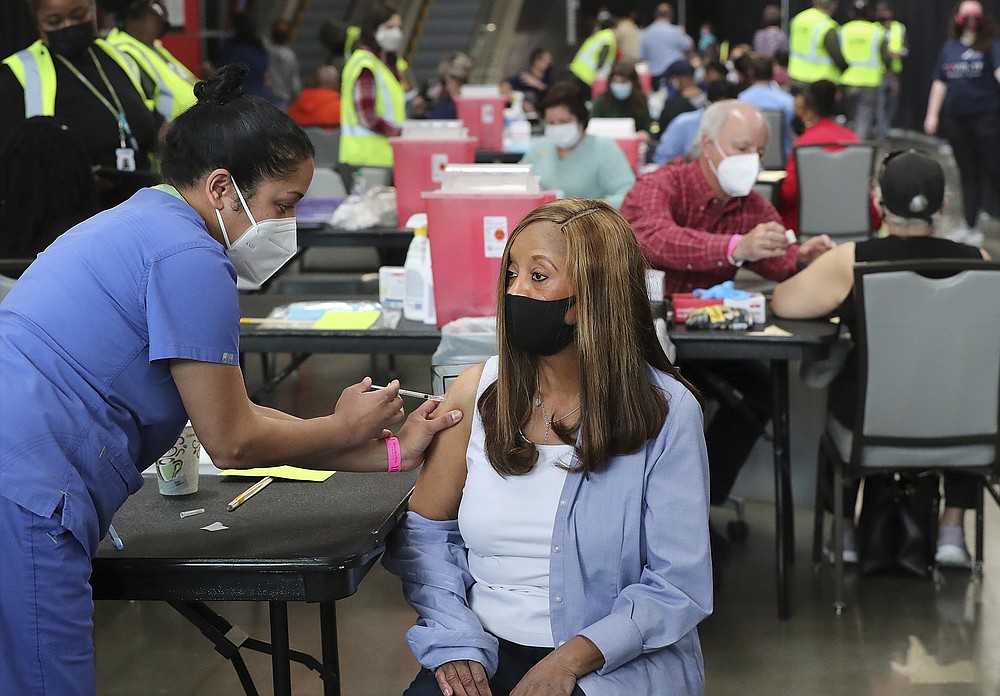 FILE - In this March 23, 2021, file photo, Anita Shetty, left, vaccinates Doris Lucas with a Pfizer vaccine in Atlanta. More than three months into the U.S. vaccination drive, many of the numbers paint an increasingly encouraging picture as dozens of states have thrown open vaccinations to all adults or are planning to do so in a matter of weeks. (Curtis Compton/Atlanta Journal-Constitution via AP, File) 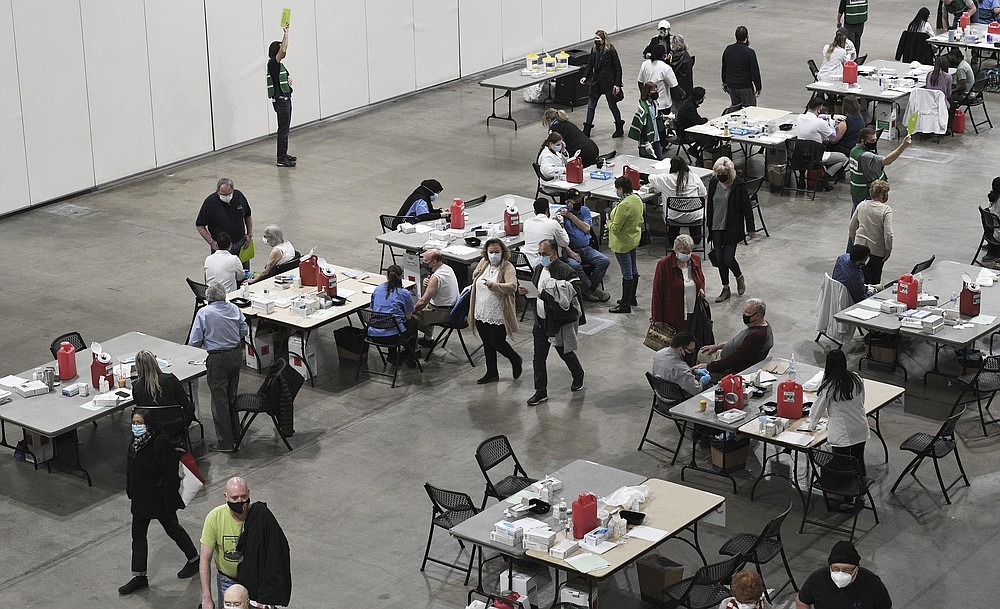 FILE - In this March 17, 2021, file photo, people show up to the Schaumburg Convention Center for the Pfizer COVID1-19 vaccination in Schaumburg, Ill. More than three months into the U.S. vaccination drive, many of the numbers paint an increasingly encouraging picture as dozens of states have thrown open vaccinations to all adults or are planning to do so in a matter of weeks. (Mark Welsh /Daily Herald via AP, File)
ADVERTISEMENT