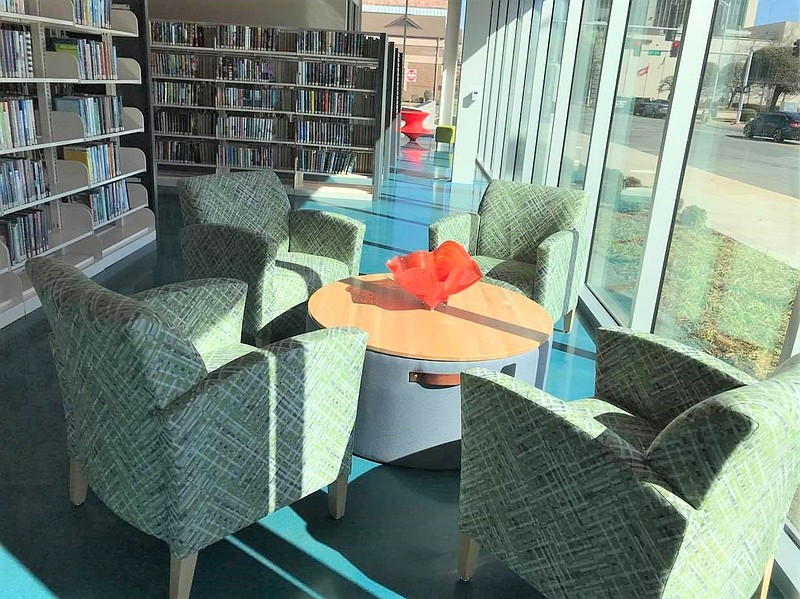 James Hayes’ glass bowl is displayed on the first floor near a street-facing window for the public to see at the new Pine Bluff Public Library. (Special to The Commercial)

It needed something to pull the room together.

Pine Bluff artist James Hayes was talking to Ricky Williams, interim director of the Pine Bluff-Jefferson County Library System about a space in the front of the library that Williams wasn’t sure what to do with.

“I thought, I’ve got the perfect piece for that,” Hayes said he told Williams. “And I want to donate it to the library for that space.” The orangeish-red bowl will be displayed at the new main library on the first floor next to the street-facing window for all to see.

“It will look great in the window,” Hayes said. “You can see it whether you’re walking or driving by. It will be good for the library and for the public.” Hayes owns and operates the James Hayes Art Glass Co.at Pine Bluff. Hayes was born at Pine Bluff. After receiving an art degree from Hendrix College at Conway in 1988, he searched for a new medium to express his artistic talent.

Three months later he discovered glass blowing at the Arkansas Arts Center Museum School. He has studied glass blowing in Murano, Italy; Columbus, Ohio; and at the Pilchuck Glass School near Seattle, Wash.

Hayes has had numerous solo and group exhibitions throughout the United States. Some of his honors include an invitation from the White House to design a Christmas tree ornament, being on the cover of At Home in Arkansas Magazine and being featured in Southern Living Magazine.

Hayes has created art glass for Hendrix College and the University of Arkansas for Medical Sciences. He has also been awarded the Hendrix College Odyssey Medal in Artistic Creativity.

He calls the donated piece a triple-footed wavy bowl.

“This is a way for me to give back to a community that has given so much to me,” he said.