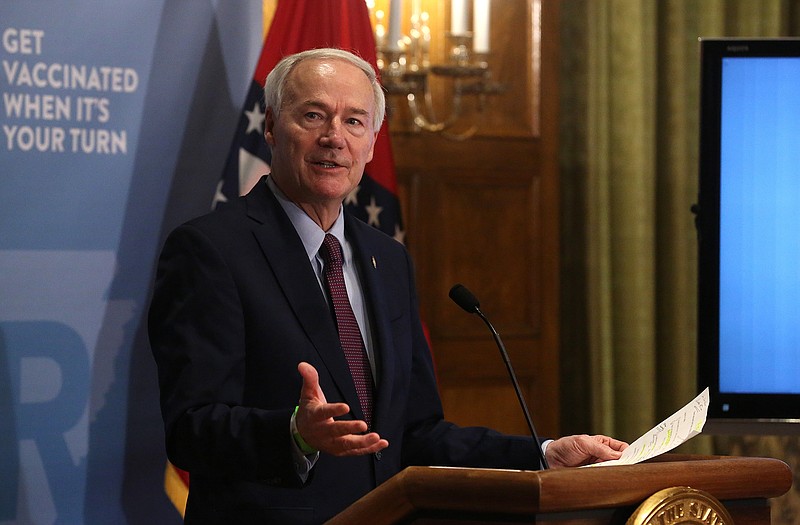 Gov. Asa Hutchinson gives an update on the legislative session and the weekly Covid-19 update on Tuesday, March 23, 2021, at the state Capitol in Little Rock. .(Arkansas Democrat-Gazette/Thomas Metthe)

Gov. Asa Hutchinson signed into law Thursday a bill that will deter schools from allowing transgender athletes to participate in girls' and women's sports, making Arkansas the second state to adopt such a measure this year.

The law allows students and schools to take legal action if they are deprived of an athletic opportunity or otherwise harmed as a result of a kindergarten-through-12th-grade school or higher-education institution not maintaining separate teams for female students.

Proponents of Senate Bill 354 said it establishes a fair playing field in female sports, arguing that athletes assigned the male gender at birth have inherent physiological advantages over girls and women.

Transgender advocates say the law seeks to address a nonexistent problem, as the bills' sponsors acknowledge that there have been no verified instances of a transgender girl or woman participating in school sports in Arkansas, and is damaging to an already-marginalized segment of young people.

In announcing his decision to sign the bill, Hutchinson said he had "studied the law and heard from hundreds of constituents on this issue."

"I signed the law as a fan of women's sports from basketball to soccer and including many others in which women compete successfully. This law simply says that female athletes should not have to compete in a sport against a student of the male sex when the sport is designed for women's competition," the Republican governor said in a statement Thursday evening.

Had Hutchinson vetoed the bill, the majority-Republican Legislature could have overridden the veto with a simple majority vote. The House sent the bill to the governor on a 75-18 vote that was along party lines, and the Senate had approved the bill 28-7.

The governor also could have allowed the bill to become law without his signature.

The sponsor of the bill, Sen. Missy Irvin, R-Mountain View, said on Twitter that she was proud to see that Hutchinson had signed it.

"This is about women/girls and the protection of fair competition and opportunities in athletics we've fought for under Title IX for nearly 50 years," Irvin said.

Earlier this week, South Dakota Gov. Kristi Noem, also a Republican, angered many conservatives when she issued a partial veto of the transgender sports ban the state Legislature there recently passed.

Noem's markup of the bill would limit the ban on transgender women from participating in female sports to elementary and high schools, excluding college athletics, The Associated Press reported. The move was meant to placate business groups and others who didn't want to see the NCAA pull tournaments from South Dakota, according to the AP.

Civil-rights organizations including the American Civil Liberties Union of Arkansas and the national Human Rights Campaign said Thursday that the Arkansas legislation discriminates against transgender young people and will set the state up for economic trouble and a damaged reputation.

"This law is a discriminatory and shameful attempt by politicians to stigmatize and exclude transgender teens," said Holly Dickson, executive director of the ACLU of Arkansas, adding that the organization "will continue to fight in solidarity with our transgender community and all those battling this onslaught of discriminatory legislation."

National health, education and child-welfare groups, including the Arkansas Academy of Pediatrics and the National Education Association, also signed an open letter opposing such bills. Nearly 550 college athletes have called on the NCAA to pull championships from states with legislation like SB354.

Rumba Yambu, director of the Arkansas transgender-rights organization Intransitive, said Hutchinson's signing of the bill was disappointing, and that it didn't feel like the governor had listened to his constituents.

"Anytime bills like this are introduced, hate crimes go up, violence against trans people goes up, and so it also doesn't align with [Hutchinson's] push or the state's push of a hate crime bill," Yambu said.

Arkansas is one of more than 20 states that has introduced legislation curtailing transgender girls' and women's participation in school sports.

A similar bill that Idaho enacted in 2020 has been blocked from taking effect by a court ruling.

The NCAA allows transgender athletes to participate on the sports team that aligns with their gender identity after one year of hormone treatment.

The rules of the Arkansas Activities Association, which oversees kindergarten-through-12th grade sports, say a birth certificate determines whether athletes may participate on girls' or boys' teams, but a changed birth certificate is acceptable.

The legislation had the backing of the national faith-based legal advocacy group Alliance Defending Freedom, as well as the Arkansas Family Council.

Barring a legal challenge, the law will take effect in the summer.