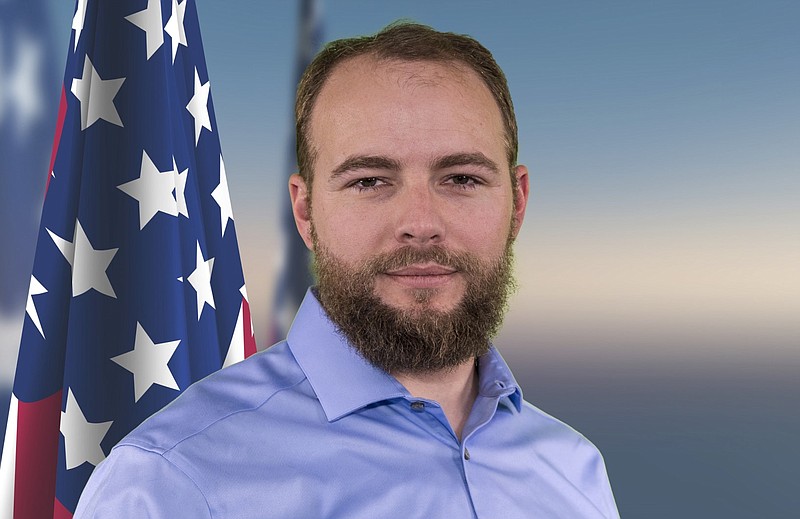 A Stuttgart minister who opposes covid-related state restrictions on churches and supports former President Donald Trump is running for the U.S. Senate, hoping to unseat U.S. Sen. John Boozman in the 2022 Republican primary.

His website, PastorHeathLoftis.com, highlights his faith and his opposition to state interference with houses of worship.

Loftis' campaign website features a flag-inspired cross, complete with red and white stripes and stars in a sea of blue.

An Easter-themed ad, posted on his campaign Facebook page, informs voters that the death of Jesus "satisfied God's wrath and justice concerning our sins" and assures them that "whosoever calls on the name of the Lord shall be saved," a promise contained in Romans 10:13.

The traditional disclaimer, "paid for by Heath Loftis Committee to Elect for US Senate," is followed by another: "Salvation paid for by Jesus Christ."

In an interview, the 37-year-old father of three portrayed his motivation in spiritual terms.

"As pastors, we are not self-willed in any way. We go as we are prompted by God in these things," he said. "Really, quite literally, I felt that He called me to do this."

It's a calling, Loftis said, that was unexpected.

"It doesn't make any sense. I can't fathom it, to be completely honest with you. I was completely content pastoring just a small little country church there in eastern Arkansas," he said.

In order to win the primary, Loftis will have to defeat Boozman as well as Hot Springs gun-range owner Jan Morgan.

While portraying the call of God as the "primary" reason for his candidacy, Loftis said disappointment with Boozman provided additional motivation.

"He's a great gentleman. I think he's a great man. I wish he would've represented us better there on Jan. 6," Loftis said.

Boozman, who has Trump's endorsement, should have stood with Trump that day, instead of recognizing the states' certified election results, he said.

"I really did feel that the election was stolen. I still believe that," he said.

Loftis also disagrees with Boozman's statement that Trump bears "some responsibility" for the storming of the Capitol.

"I still believe that there was a lot of false flag protesters that breached the Capitol," he said.

While nearly all of those arrested are self-identified Trump supporters, the Senate candidate said he suspects many of the ringleaders were probably antifa and Black Lives Matter activists.

He learned about the incident on a television in his hotel room, he said, eventually heading toward the conflict.

"I just went over there just to see what was going on," he said, adding that he didn't enter the Capitol.

"I just got up to about the steps," he said.

A native of Humnoke, Loftis is a graduate of Arkansas State University and a tae kwon do instructor.

His campaign platform features several familiar conservative planks. It calls for smaller government, an end to deficit spending, a flat tax, a ban on abortion except when the mother's life is at stake, term limits and a balanced budget amendment.

In the interview, Loftis said he saw the problems caused by state covid restrictions firsthand.

"In June, we were put on that 'Church Naughty List' of people that had covid," he said.

The person who contracted the virus hadn't attended services since last March, he said.

It's inappropriate for the government to create or release lists of congregations where worshippers have had covid-19," he said, adding, "This is just way too Orwellian for me."

Loftis also advocates repealing the 17th Amendment, which empowered direct election of U.S. senators. That wasn't the intention of the Founding Fathers, he notes, suggesting state legislatures should pick them instead.

State legislatures should also explicitly be empowered to recall the senator they select, he added.

This is Loftis' first run for elected office.

Boozman, who formally announced his reelection plans on March 6, is seeking a third term in the Senate.

In a written statement Thursday, Boozman campaign spokeswoman Toni-Marie Higgins said the senator is "a strong, effective leader for Arkansas and his conservative record has earned the full support of President Trump, [U.S. Sen. ] Tom Cotton, and [former White House press secretary] Sarah Huckabee Sanders. Boozman will continue to take his proven record of fighting for and defending conservative values and Arkansans' way of life to every corner of the Natural State."

"He's a pastor. He loves the Lord. He's a Trump conservative," Fulmer said, adding, "He's a common man for the common people."