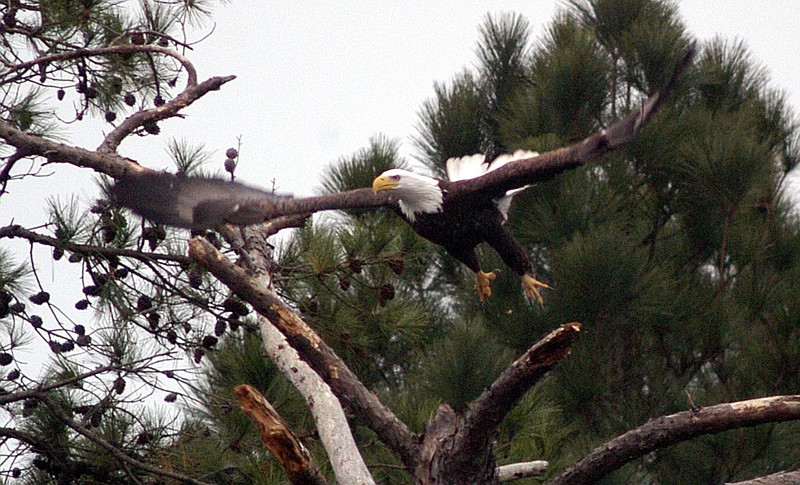 A bald eagle launches out of a dead tree in the Long Creek Cove area of DeGray Lake in this January 2004 file photo. (Arkansas Democrat-Gazette file photo)

It was one of Arkansas' great mysteries.

Eagles stumbled like they were drunk. Some flew into cliffs.

Eventually, eagles with similar symptoms were observed at lakes across the southeastern United States.

On Friday, a study published in the journal Science named the culprit: aetokthonotoxin, which means "poison that kills the eagle."

It's a new toxin produced by a cyanobacterium when it comes into contact with bromide, according to the study, led by Susan Wilde, an associate professor of aquatic science at the University of Georgia.

The cyanobacterium thrives on an invasive water plant called hydrilla verticillata, which was common in man-made lakes, like DeGray.

Dr. Jennifer Ballard, wildlife veterinarian for the Arkansas Game and Fish Commission, said a toxin in blue-green algae (another name for cyanobacteria) on the hydrilla was the suspected culprit a decade ago when she was a graduate student at the University of Georgia.

Water birds called coots ate the toxic hydrilla, got sick and became easy prey for eagles, which got ill after feeding on the coots.

"Vacuolar myelinopathy is a fatal neurological disease that was initially discovered during a mysterious mass mortality of bald eagles in Arkansas," according to the research article in Science. "Investigators of the Arkansas die-off began to notice eagles and waterbirds with similar neurological impairment throughout the southeastern states. By 1998, the emerging disease was termed avian vacuolar myelinopathy and had been confirmed at 10 sites in six states."

Ballard said the new study identified the toxin and the fact that it is produced when the cyanobacterium comes into contact with bromide, which is a binary compound of bromine and another element.

"We've known for a number of years that this disease appears to be related to the hydrilla and the algae that grows on the hydrilla," she said. "What this paper does is it closes that loop. They've actually identified that toxin."

There are several ways bromide could have gotten into the lakes. The research article cites natural sources of bromide (geologic origin) as well as power plants, fungicides and gasoline additives.

Ironically, bromide is sometimes used in herbicides in an attempt to control hydrilla.

"Dense infestations of submerged aquatic plants can be managed using chemical, biological or physical controls," according to the article. "Notably, herbicides containing bromide as counterions (e.g., diquat dibromide) are currently used to combat the spread of invasive submerged aquatic plants, including H. verticillata. Benefits and risks of using any bromide-containing chemical control agents within vacuolar myelinopathy reservoir watersheds need to be reassessed."

Sean Lusk, a fisheries biologist with the Game and Fish agency, said sterile grass carp and flies native to Pakistan were introduced into DeGray and Lake Ouachita to feed on the hydrilla.

But fluctuating lake levels seem to have done a better job at getting rid of it.

"On Ouachita and DeGray, around 2009 and 2010, that vegetation vanished over a short period of time," he said. "We had a period of near-record lows [lake levels]. Then we had a couple of years of near-record highs."

Vegetation needs sunlight. When the lake was high, the hydrilla wasn't getting enough light, said Lusk.

He said the plant is usually rooted in shallow waters but the stems can grow to be 25 feet long.

It's good for fish habitat. Not so good for boat propellers or swimmers.

"The last thing you want to swim in is something with a lot of seaweed," he said. "It's like you've got a sea monster wrapped around your legs."

Lusk said boat propellers may have been the vehicle that brought the hydrilla to Arkansas lakes.

"More than likely, it came from another body of water as what we refer to as an aquatic hitchhiker," he said. "Once it got in there, it really took off at both lakes."

Lusk said the hydrilla left tubers in the soil, and lately it seems to be growing again on DeGray and Ouachita. He thinks coontail would be a good replacement for the hydrilla. It would provide fish habitat and not grow uncontrollably.

Wilde asked people to be on the lookout for animals that might be affected by the disease, according to an article in UGA Today.

"I would avoid eating fish with lesions or some sort of deformities," she said.

According to the study, "A. hydrillicola, growing in colonies on aquatic vegetation, produces the neurotoxin aetokthonotoxin. Waterbirds, tadpoles, aquatic turtles, snails and fish consume this contaminated vegetation and develop vacuolar myelinopathy. Predators develop vacuolar myelinopathy when they consume animals that have been grazing on A. hydrillicola-covered plants."

"Mammals may also be at risk" because of the way aetokthonotoxin accumulates and is passed through the food chain, according to the study.

Keith Stephens, a spokesman for the Game and Fish Commission, said he wasn't unaware of the disease affecting any animals in Arkansas other than, apparently, the eagles of the 1990s.

Ballard said 2002 was the last year there was a confirmed death of a bald eagle in Arkansas from vacuolar myelinopathy.

She said three things are needed for a disease to take hold: a host, a pathogen and a suitable environment.

Ballard said Wilde's study is a success story because it means the environment was effectively manipulated to remove the pathogen and stop the spread of this disease.

"This gives us the science that we need to manage our wildlife effectively," she said.

If anyone sees sick or dead wildlife in Arkansas, Ballard asks that they email the Game and Fish Commission at agfc.health@agfc.ar.gov.