Demand for shots spotty in Arkansas 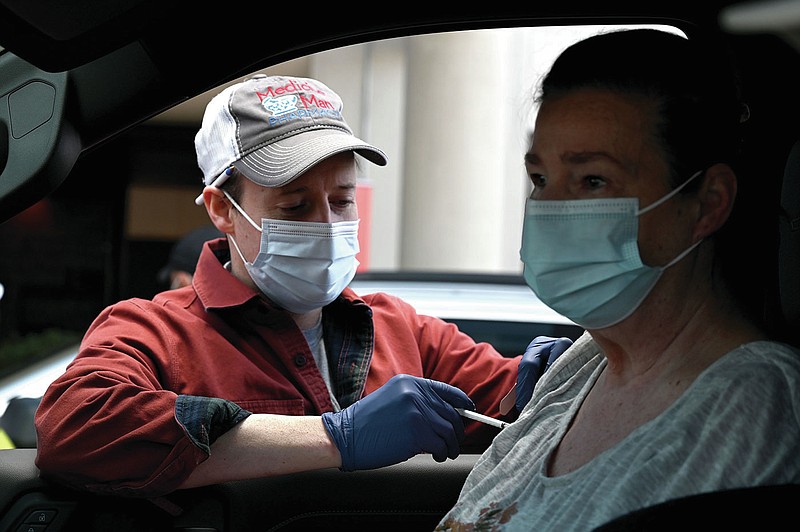 Ten days after Gov. Asa Hutchinson extended eligibility for the coronavirus vaccines to almost 1 million Arkansans, providers on Friday continued to report varying levels of demand for the shots.

Kavanaugh Pharmacy in Little Rock had one of its busiest vaccination weeks so far, with about 350 people a day receiving first or second doses of the vaccine developed by Pfizer and BioNTech on some days, co-owner Anne Pace said.

But she said only about 750 of the 1,000 appointment slots for shots of the single-dose Johnson & Johnson vaccine at a clinic set for today at St. Luke Baptist Church had been filled as of Friday afternoon.

"I think some of it's that the people who really want the vaccine have gotten access to it, and so we may be starting to go where the people are maybe unsure or just a little bit hesitant," Pace said.

"I think those people are going to be the ones we have to push a little harder to get to."

Meanwhile, the downward trend in Arkansas' daily coronavirus case increases resumed Friday, with the 184 added cases falling short of the number added a day earlier and the previous Friday, March 19.

After rising a day earlier, the number of patients hospitalized with covid-19 fell by five, to 176.

The state death toll from the virus, as tracked by the Department of Health, rose by 12, to 5,583.

"My optimism grows daily as the number of COVID-19 cases and hospitalizations continues to decline," Gov. Asa Hutchinson said in a statement.

He said "more than a million" Arkansans had been partially or fully vaccinated. The U.S. Centers for Disease Control and Prevention, however, put the number at 730,820.

Hutchinson later issued a revised statement saying providers had "administered more than a million doses of vaccine to more than 700,000 Arkansans."

"The goal line is in sight, but this is not the time to slack off," Hutchinson said.

"We need to increase the percentage. I encourage you to receive a vaccination as soon as you are eligible. If you don't do it for yourself, do it for your family and friends."

Pace said the available appointments at her store this week filled up quickly after Hutchinson last week extended eligibility for the shots to people ages 16-64 with health conditions putting them at risk of severe illness from the virus and to certain types of "essential workers," including those with jobs in food service, transportation, the media and other industries.

The start of Phase 1-C of the vaccination plan also made the shots available to prison and jail inmates and others living in "high-risk" settings, such as student housing and group homes.

As of Friday evening, however, Kavanaugh Pharmacy's website indicated that it still had one appointment slot available for today for an initial dose of the Pfizer vaccine.

"I can see new first doses are starting to slow just a hair," Pace said.

The 500 available slots for a drive-thru Pfizer vaccination clinic Sunday at Dickey-Stephens Park in North Little Rock filled up early this week, about five days after the event was announced, said Brooks Rogers, a pharmacist at Don's Pharmacy in Little Rock.

"I felt like the response was really good -- a lot better than we initially expected, I would say," said Rogers, whose store is providing the shots for the event.

Although it was too late Friday to book an appointment at the event, the store's website indicated that several slots were available Monday at a clinic operated by the pharmacy at Little Rock Surgery Center.

Rogers said the store started offering shots at the center a couple weeks ago.

"We kind of do like a satellite clinic a couple days a week, use their facility, and some of their nurses volunteer to give the shots and we have our staff there as well," Rogers said.

Someone wanting to book an appointment at Debbie's Family Pharmacy in Rogers will have to wait longer.

Owner Andrew Mize said he stopped adding to the store's waiting list for the shots about a month ago, after the number of names grew to more than 9,000.

Since then, he said, the store has whittled the number down to fewer than 4,000 by calling people to schedule appointments and checking a database listing people who already have received a shot.

For every 10 people contacted, "we may get one" who hasn't already been vaccinated somewhere else, Mize said.

He said his store administers 100 to 200 Pfizer shots, including second doses, a week.

The Benton County Division of Public Safety and Collier Drug on Wednesday will hold the first of 13 weekly clinics planned at the county fairgrounds in Bentonville.

Weeks four through 10 also will provide second doses for people who have received their initial shots. The last three weeks will be just for second doses.

After holding several mass clinics in different places, Waddle said he "quickly realized that it would be a matter of time before we kind of ran out of volunteers and locations to keep having these clinics."

"In addition, I was beginning to see some frustration from the public on just having to keep track of these pop-up events here and there and everywhere," he said.

This week, the county's Quorum Court approved spending $100,000 in federal coronavirus relief funds to pay for the rental of the fairgrounds auditorium and a staff of 13 to provide the vaccinations and run the clinic.

Waddle said the organizers started taking appointments for Wednesday's clinic on Monday, and "we were booked solid" by the middle of the next day.

In neighboring Washington County, Mercy Clinic Springdale has been administering 1,000 Pfizer doses, including second doses, per day, Mercy announced in a news release.

Mercy spokeswoman Jennifer Cook said people who sign up for the shots on the health system's website can typically get their first dose within four to five days.

According to the Health Department, providers participating in the vaccination effort coordinated by the state had received 1,599,810 doses as of Friday morning, up 32,150 from the total a day earlier.

The doses those providers reported having administered, including second shots of the Pfizer and Moderna vaccines' two-dose regimens, rose by 21,418, to 939,908.

In addition, Walmart, Walgreens, CVS and network pharmacies had been allotted 268,430 doses through federal programs, up 21,950 from the total a day earlier.

According to the CDC, the number of Arkansans who had received at least one vaccine dose rose Friday by 20,326, to 730,820, representing about 24.2% of the state's population.

Among the states and District of Columbia, Arkansas moved up from No. 42 to No. 41 in the percentage of its residents who had received at least one vaccine dose.

It continued to rank 46th in the percentage who had been fully vaccinated.

Nationally, 27% of people had received at least one vaccine dose and 14.7% had been fully vaccinated.

After rising a day earlier, the average number of cases added over a rolling seven-day period fell Friday by six, to 203.

"Yesterday I was a little worried we might be starting an upward trend," state Epidemiologist Jennifer Dillaha said. "It didn't continue today, so that's something in our favor."

The number of virus patients on ventilators fell by six, to 32.

Five of the deaths reported Friday happened more than a month earlier, she said. One happened in mid-January and four occurred in mid- to late February.

The cases that were added in the state included 106 that were confirmed through polymerase chain reaction, or PCR, tests.

The other 78 were "probable" cases, which include those identified through less-sensitive antigen tests.

The number of cases considered active fell by 34, to 2,061, as 206 Arkansans were newly classified as having recovered.

Among prison and jail inmates, the Health Department's cases rose by one.

Department of Corrections spokeswoman Cindy Murphy said the Tucker Unit in Jefferson County had one new case among inmates. That was the only case at the prison that was active as of Friday, she said.

Among nursing home and assisted-living facility residents, the count of virus deaths rose by one, to 2,058.

The number of virus patients who have ever been on a ventilator rose by two, to 1,575.

CORRECTION: Mercy Clinic Springdale has been administering 1,000 Pfizer doses of covid-19 vaccine, including second doses, per day, Mercy announced in a news release. An earlier version of this story incorrectly described how often every 1,000 doses were administered.