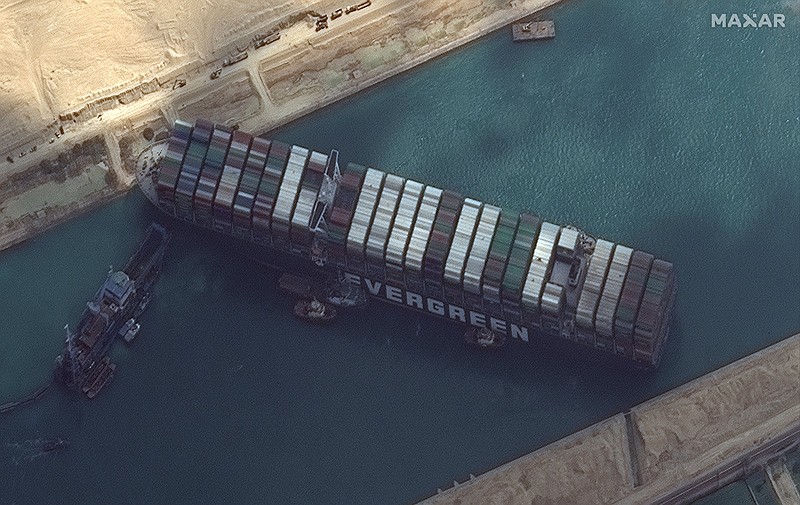 This satellite image from Maxar Technologies shows the cargo ship MV Ever Given on Friday as it remains stuck in the Suez Canal near Suez, Egypt, where other vessels are stacking up behind it. (AP/Maxar Technologies)

CAIRO -- Automobiles, beer, live animals and billions of dollars of crude oil and other commodities remained stranded Friday in the Suez Canal as crews tried to free a grounded container ship that has come to symbolize the perils of a global economy that relies on being able to send goods around the world in larger and larger vessels.

The 1,312-foot-long, 200,000-ton Ever Given, one of the largest container ships ever built, has been stuck in the canal since Tuesday, creating an increasingly expensive traffic jam on both sides of the waterway that connects Asia to Europe.

Some tankers already have opted to change course and travel around the southern tip of Africa instead, adding weeks to their journeys and raising fears that the valuable cargo could be an appealing target in a region known for piracy.

"It just shows you how vulnerable our supply-chain lines are," said Guy Platten, secretary-general for the U.K.-based International Chamber of Shipping. About 10% of world trade flows through the canal.

"We're now beginning to see even vessels that had entered the Mediterranean hang a U-turn," Lars Jensen, the chief executive officer of SeaIntelligence Consulting in Denmark, told The Washington Post. "That's an indication that they don't believe this is going to be solved in the short term."

The Japanese owner of the ship expressed hope that it could be freed by tonight. Yukito Higaki, president of Ever Given owner Shoei Kisen Kaisha, apologized Friday for the "great trouble and concern," according to the Japanese financial news website Nikkei Asia.

Freeing the Ever Given is "quite a challenge" and could take five days to a week, Capt. Nick Sloane, a maritime salvage expert who led the high-profile effort to salvage the cruise ship Costa Concordia in 2012 told the AP.

The Ever Given's location, size and large amount of cargo make the operation more complex, Sloane said. The operation should focus initially on dredging the bank and sea floor around it to get it floating again, rather than unloading its cargo, which would take weeks.

The Ever Given is wedged in a single-lane stretch of the canal, about 3.7 miles north of the southern entrance, near the city of Suez.

Dredgers have stopped removing sand around the bow of the vessel and tugboats were preparing another towing attempt, Lt. Gen. Osama Rabei, head of the Suez Canal Authority, said in a statement Friday night. There was no immediate word on whether they have managed to budge the skyscraper-size vessel, and previous attempts with tugboats were unsuccessful.

A team from Boskalis, a Dutch salvager, was working with the canal authority with tugboats and a specialized suction dredger at the port side of the cargo ship's bow. Egyptian authorities have prohibited media access to the site.

At least seven tankers carrying liquefied natural gas were diverted, including three steered toward the longer route to Europe by way of the Cape of Good Hope at the southern tip of Africa. Another nine tankers were expected to be diverted if the blockage continues into the weekend, an analyst for data intelligence firm Kpler told the Guardian newspaper.

Detouring around Africa is likely to add a week or two to most ships' journeys, depending on where they were when they changed course.

It also will mean hundreds of thousands of dollars in additional fuel costs, putting ship operators in a difficult place where they're forced to guess if the extra time and expenditure will pay off.

With more ships potentially being diverted to the Cape of Good Hope, piracy could increase. Pirates have long preyed on ships moving in the waters off the Horn of Africa, and the seas off oil-rich West Africa are now considered among the world's most dangerous for shipping.

The U.S. Navy it has been contacted over the past two days by shipping firms from other nations concerned about the heightened risks of piracy to ships being rerouted, a spokesperson for the U.S. Navy's 5th Fleet based in Bahrain told the Financial Times.

The Ever Given, which is operated by Evergreen Marine Corp. of Taiwan, was headed to the Netherlands on Tuesday when it ran aground in the 120-mile-long passage from the Red Sea to the Mediterranean during a dust storm. Exactly how the stranding occurred remains unclear, but experts have speculated that the containers stacked atop the ship could have acted like a huge sail propelling the boat forward in high winds.

Bernhard Schulte Shipmanagement, which is responsible for managing the ship's crew and maintenance, has said that an investigation is underway.

Continued failure to dislodge the ship could become a source of embarrassment for Egypt, where the canal and its pivotal role in global trade is a source of national pride. The country spent $8 billion to widen the canal in 2015, but only in selected areas, and not in the section where the Ever Given ran aground.

With more than 200 other ships stuck in the bottleneck, moving the Ever Given only will create a new set of headaches. Many of those vessels will arrive in European ports at the same time, and find they have nowhere to dock and unload their cargo.

"Once you open the canal, it's like ketchup out of a ketchup bottle," Jensen said.

Information for this article was contributed by Sudarsan Raghavan and Antonia Noori Farzan of The Washington Post and by Samy Magdy, David Rising, Pan Pylas and Nancy Benac of The Associated Press.