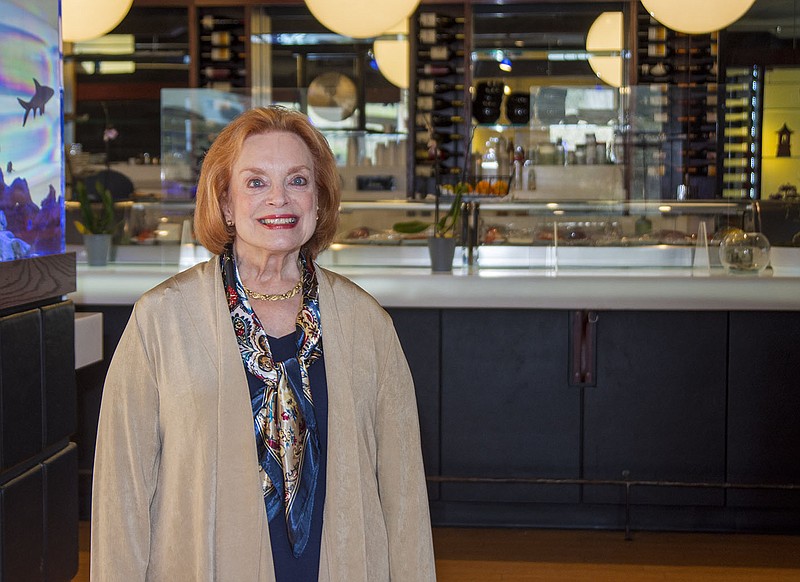 The Arkansas Symphony Guild has created a new culinary experience for patrons to savor. The four-part virtual series, a fundraiser for the guild, is called A Symphony of Flavors.

Each Thursday in April, the guild will feature an online program of an Arkansas chef preparing an entree and music by members of the Arkansas Symphony Orchestra.

"We asked four local chefs to develop menus and to prepare the entrees for us in their kitchens and allow us to video that," says Tandy Cobb, chairman of the new event.

For each Thursday presentation, ticket buyers will receive a gift basket. "In the basket, they'll have a bottle of wine, the menu and the recipe for the entree. And they'll have some of the ingredients that may be hard to find. So, each basket will be customized to the menu and the chef."

The wine in the basket, she says, will be recommended by the chef to go with the entree.

Each program will have a theme as viewers watch chefs prepare an entree from their repertoire step-by-step. Participants can watch or follow along in their own kitchens. A list of ingredients and the recipe will be sent to viewers the day before the program airs. Programs will be available for viewing for two weeks after the event so the home chef can make the dish later.

On April 8, the presentation is Variations on a Mexican Theme. Capi Peck, executive chef and an owner of Trio's Restaurant, will prepare a Mexican stew called Legumbres En Pipian from her home kitchen. The music will be from a recorded Arkansas Symphony performance.

Asian Suite is the program on April 15, with chef Ricardo Rincón of Kemuri Restaurant demonstrating the preparation of his Miso Cod entree. Music will be by the Quapaw Quartet.

An Ode to Italy will be presented on April 22. Eric Isaac, executive chef and owner of Ristorante Capeo, will make Chicken Piccata over homemade noodles at the restaurant and will give viewers a tour of the wine cellar. The Rockefeller Quartet will provide the music.

The April 29 installment will be Springtime Sonata featuring Clark Trim and Henrik Thostrup, owners of Colonial Wines and Spirits. Thostrup, who is also a chef, will prepare Roast Rack of Lamb Provence. Trim, a hospitality expert, will show viewers how to prepare for a dinner party. Music will be by Kiril Laskarov and Dora Paley Ronnel.

Cobb, who is working with a committee of 14 guild members, says the idea for the event evolved as they realized they would have to do a virtual fundraiser. "It's been a lot of fun and I think it's going to be a great success," she says.

She says the tickets went on sale March 1 on their website. "We are already in good shape, moving toward our goal, so we feel like we're going to do well with it."

The money raised by the ASO Guild's epicurean event will help support the activities of the Symphony, including youth orchestras, the annual children's concert held at Robinson Center Performance Hall and the Stella Boyle Smith Young Artists Competition. Due to the pandemic the music education programs with schools have been put on hold, but the Young Artist Competition will be held virtually this spring.

The Guild was started in 1968 and has contributed more than $2 million to the orchestra, Cobb says.

Tickets for a single demonstration are $75; $200 for all four. Ticket buyers will be emailed a link to join the demonstrations, which begin at 7 p.m.

There isn't a limit on the amount of tickets that will be sold, says Cobb, but they do have a disclaimer: The guild would like to have tickets bought at least a week before.

"For those who want their baskets before the day of the program, we need to have their reservation a week before the actual airing of the video."

She explains that if tickets are bought later, that doesn't mean the buyer won't get a gift basket, but "we just can't guarantee that they will have it by that Thursday night."

She says the people putting all the gift baskets together and determining how to deliver them are currently the busiest on the committee.

Symphony of Flavor tickets and more information may be found on the ASO's website arkansassymphony.org.

CORRECTION: The Arkansas Symphony Orchestra Guild, founded in 1968, is hosting Symphony of Flavors. The purchase price for all four of the cooking demonstrations is $200. The founding year and price were incorrect in an earlier version of this article.